From all the research I've done, a 6700k shouldn't be bottle-necking a 2080 super to the extent that I'm seeing. I'm also confused as to why the performance would be even worse than when I was running the 1070. I've included a screenshot of the monitor graphs running BF1.

While I think it's the CPU, I suspect something else might be going on since a quick checks shows other systems running 6700k and 2080 having much different performance at stock clock values (https://www.gpucheck.com/gpu/nvidia-geforce-rtx-2080/intel-core-i7-6700k-4-00ghz/ ). Comp Specs below. Any Ideas?

Couple other Tidbits - CPU temps with 4.4Ghz OC stable at 85 deg C. I tried going back to stock clock and wasn't able to identify an appreciable difference between stock clock (4Ghz) and OC (4.4). Witcher frames around 50-60 FPS as well, quick turns with mouse resulted in same stuttering and lag spikes down to sub 30FPS. Again, GPU usage stayed around 50-60%, while CPU was up at 85-90% but not pegged at 100%. Novabench (not sure how useful or reliable) shows GPU performance way down compared to other 2080s (I don't know how useful this is or if GPU benchmark tests are affected if a CPU bottleneck exists).

Strange that it is THAT different but, OK...

What bios are you using for motherboard? What Nvidia driver?
0

Fix_that_Glitch said:
What bios are you using for motherboard? What Nvidia driver?
Click to expand...

I did some more testing on on AC origins I get the following framerates . 48 avg on Very High which again compared to other benchmarks I've seen is extremely low. (Should be around 70-80 at ultra 1440p)

OAre you using display port cable? Also did you go into windows display settings, check display adapter settings and make sure they mirror you Nvidia display settings? Why aren't you running the monitor at native 165hz? Did you uninstall then reinstall drivers for new gpu?
Last edited: Aug 31, 2019
0

Fresh install of drivers and \/

If you running the 2080 off a single power cable, throw a second one on it and test again.
0

Fix_that_Glitch said:
OAre you using display port cable? Also did you go into windows display settings, check display adapter settings and make sure they mirror you Nvidia display settings? Why aren't you running the monitor at native 165hz? Did you uninstall then reinstall drivers for new gpu?
Click to expand...

Yes, I am using a display port. Windows Display adapter settings does mirror Nvidia display settings. The only reason I'm running 144 is because the ROG Swift OCs to 165. Without turning on the OC setting it's 144, and I have that setting off at the moment so the most I can set refresh to through nvidia and windows is 144. I did uninstall and reinstall GPU drivers.

Fresh install of drivers and \/

If you running the 2080 off a single power cable, throw a second one on it and test again.
Click to expand...

I did use DDU to have a clean driver install. I am using both power slots. However, I don't know much in this area, both power cables are from the same part of the PSU...is that ok? I tried to get a pic below 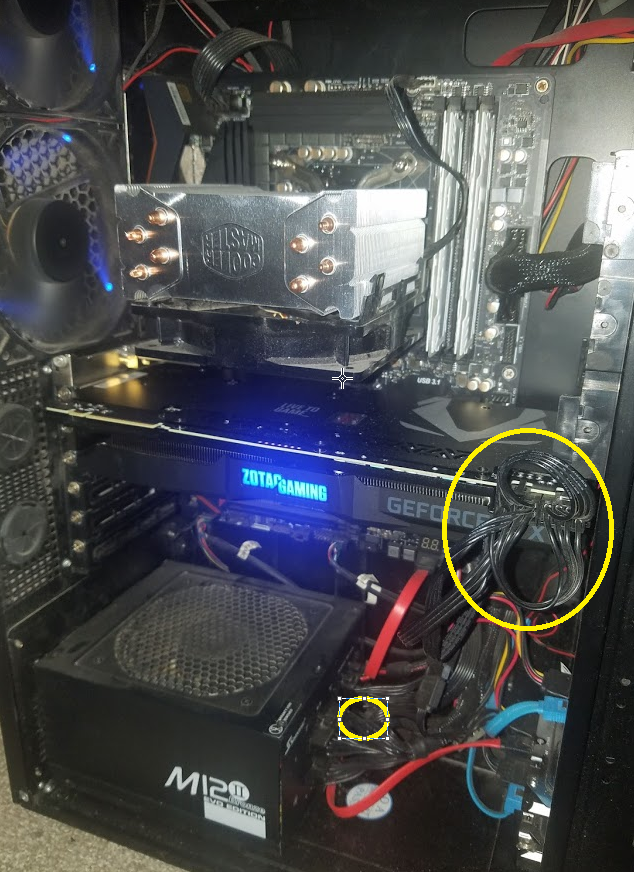 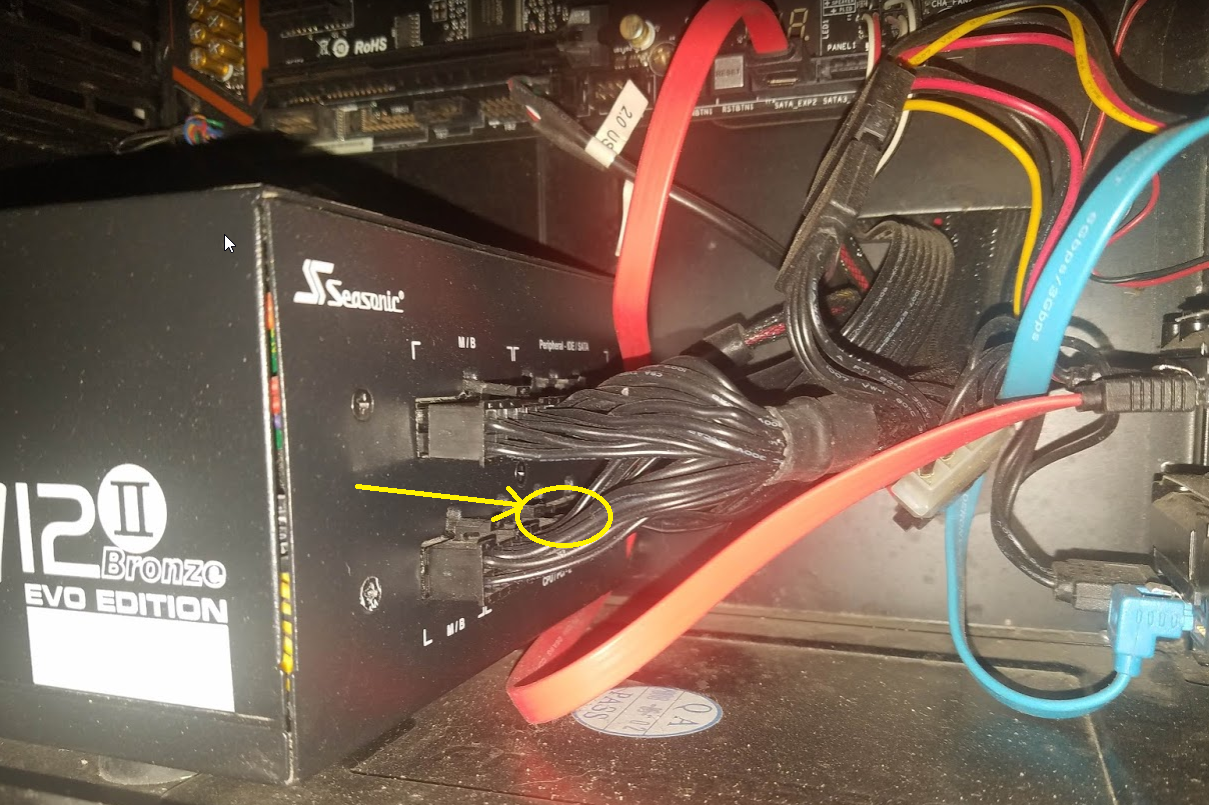 I mean using two physical cables from the psu to the card. Also WHAT happened to that psu ???
0

Also, is it me or is there physical damage to the video card PCB ?

Nothing, I think I took the cover off once to clean it, but the close up just makes it look weird. That notch on the video card is supposed to be there too although I don't actually know what it's used for. A bridge connection for SLI perhaps? 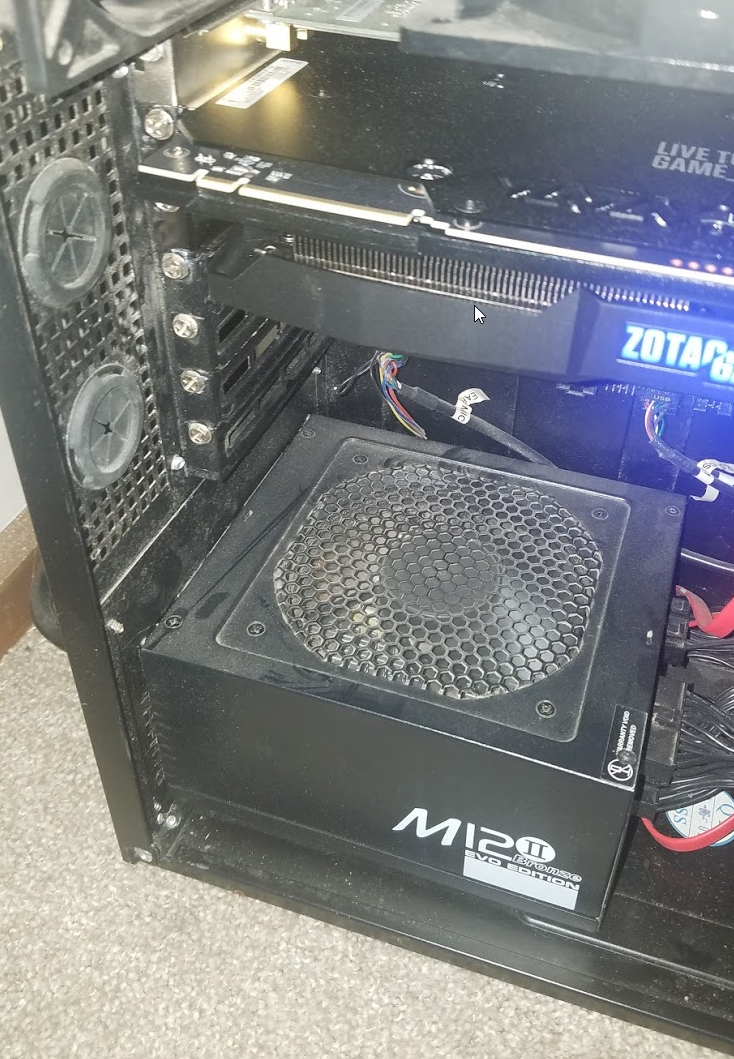 So I think I may have figured it out, I was still on an old update of windows. 1803 vs 1903. I'm not sure why the impact was so great to the GPU. I looked it up a bit and I don't thing the impact should have been that great but with 1903, I think my benchmarks are now more or less close to what I would expect them to be. I think the CPU might still be reducing FPS but it's not to the level where I think there's some other system problem. Here's the new performance on Assassins Creed Origins, avg FPS almost doubled!

That is the weirdest notch I have ever seen, looked like a chunk had broken off at a distance. Yeah the contacts are for whatever they call it now that replaced SLI, I don't even bother knowing the term because it's useless as a gamer
Last edited: Aug 31, 2019
0

Strange that it is THAT different but, OK...

Assains Creed is very dependant on cpu usage so I think you problem lies somewhere around that. Whether it is a driver from windows 1903 that is causing it, you will have to track it down. I would go in to bios and set your settings to optimal settings and reset. P.s. your internal parts could use a good cleaning I believe. You could simply be getting a power problem from arcing due to too much dust inside your pc.
Reactions: Rolando_d
You must log in or register to reply here.
Share:
Facebook Twitter Reddit Tumblr WhatsApp Email Link