So today i spent a good amount of time putting together my own first build outside of upgrading and everything was going fine i had tested fans and even the lights on my Eclipse P400 before going forward with cpu and the rest of my build however i had noticed the RGB stripe that i connected was loose and before i had everything set up it turned on so i figured i'd save it for last but once i plugged it in the wrong way it wasn't working then i fitted in again pc turned on lights and everything was good for a few seconds then pop and then i smelled something burning pc no longer turns on i haven't touched it since will take it apart and check things tomorrow ,looking it up more i thought i read everything right but being new to RGB stuff i had no idea for my case i had to buy a adapter to actually fit my motherboard now i'm lost on if it's just my motherboard or i just lost all my parts due to this one thing being plugged in any help would be great 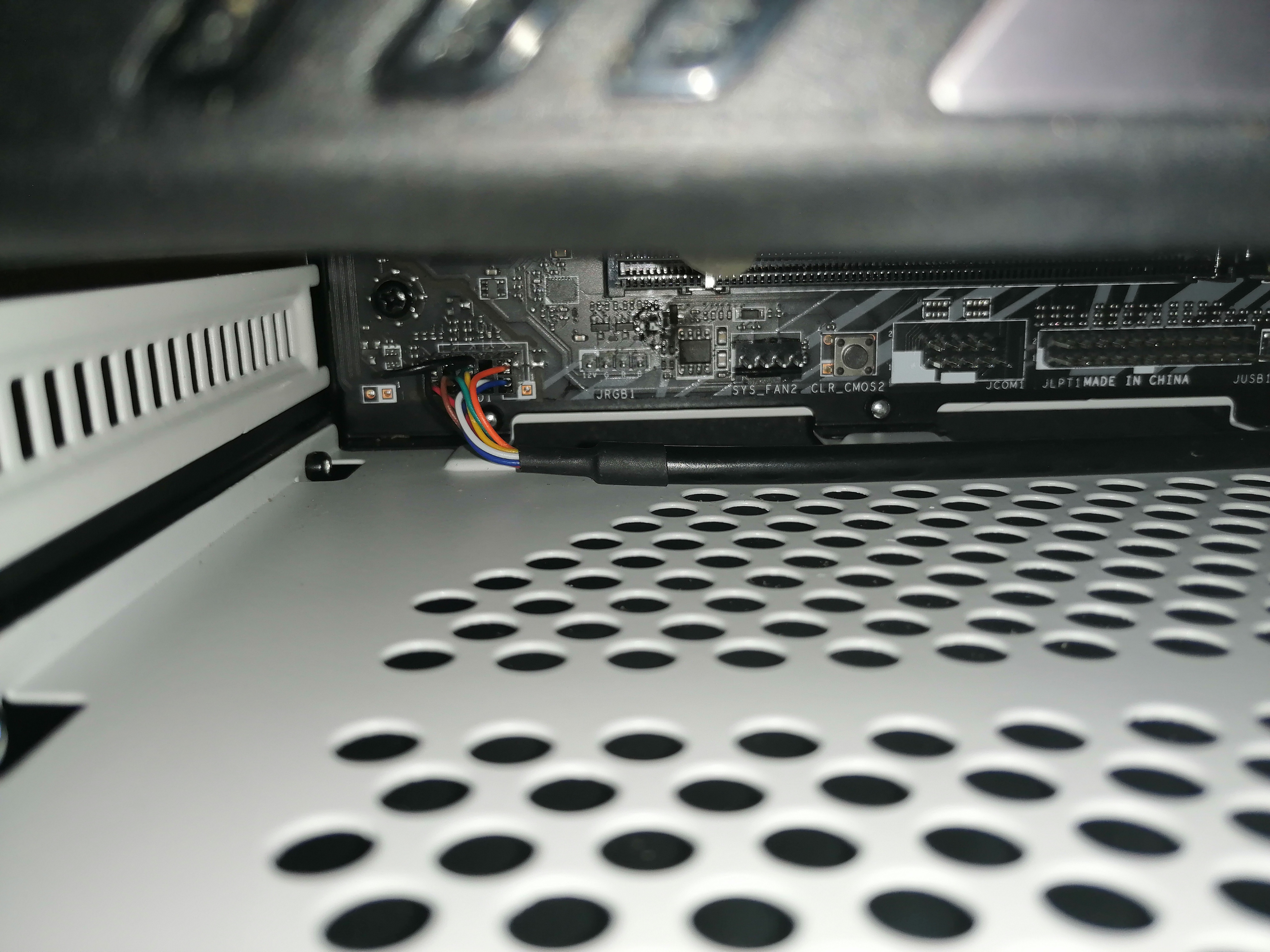 1) Initially plugging the cable in the wrong way may have been salvageable but trying to reconnect the plug with power on was likely fatal to at least the motherboard.

2) Regarding the need for some adapter for the motherboard to fit in the case: what sort of adapter? What led you to that adapter and how was it installed? Any photos?

3) A SATA connector would not connect to the case. The cable would go between the motherboard and a SATA device. Was it a data cable or power cable? Photos? Both ends.

Overall, based on the photograph provided it appears to me that the motherboard is, unfortunately, fried. There is significant damage just above and to the right of JRGB1.

Seeing additional photographs will help understand what all may have gone wrong and/or help identify other damage that may have occurred. Any other misconnections could have sent current the wrong way and into other components.

Still is it likely that there is no way to immediately determine if other components were damaged.

They will need to be individually tested in a compatible and known working system.
0

the white and black cable is the sata cable that goes right to the top of the inside of my case ,everything was working just fine before i plugged in that RGB stripe ,my friend thinks it's just the motherboard but asked if i tested anything or if my PSU smelled it just smells like a PSU but i'll strip everything out since i'm already sending back to amazon and getting something else won't be a few weeks till i can test it on new motherboard unless there are some things i can test without another pc don't have a spare one to test things on that's free 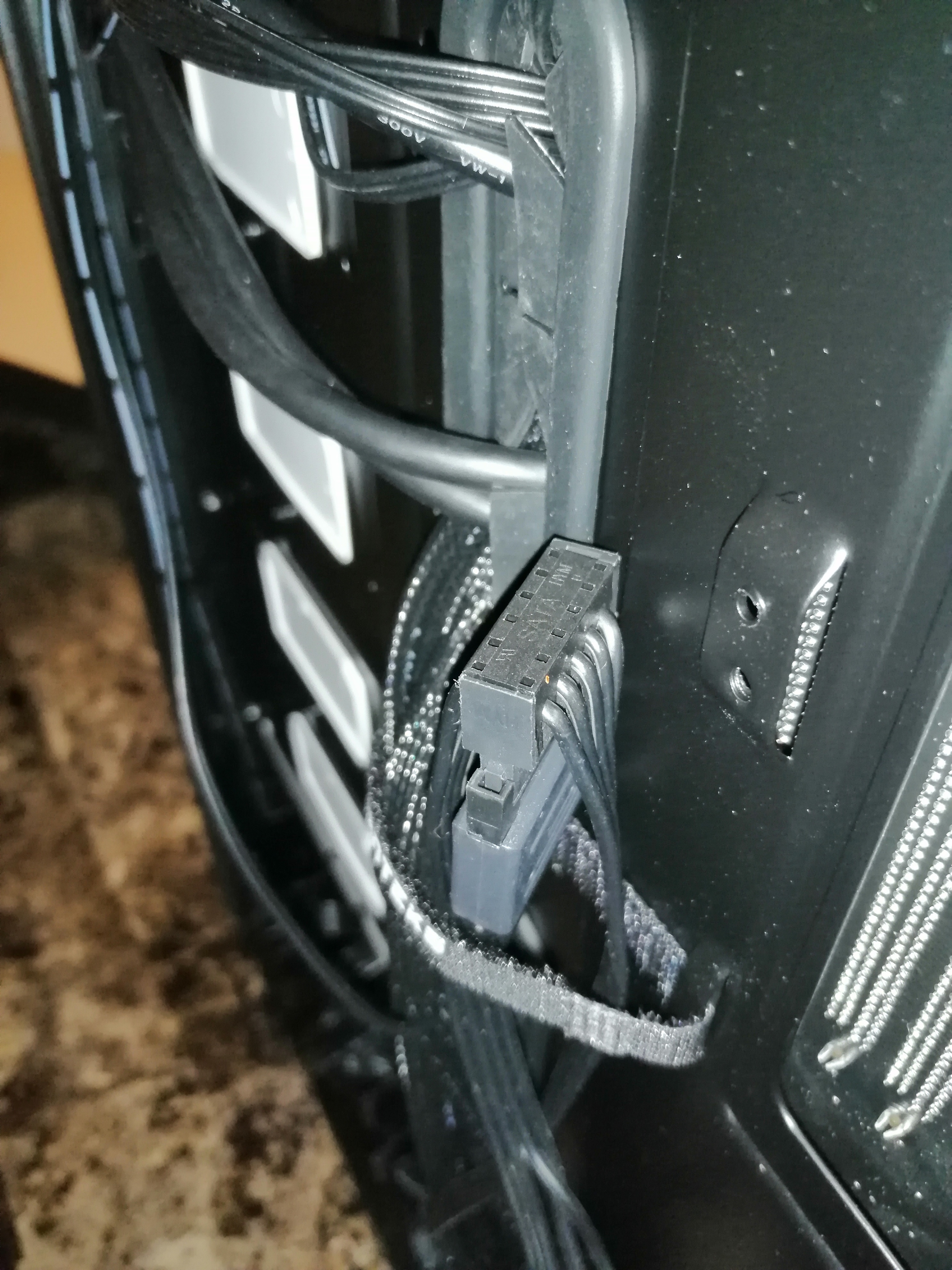 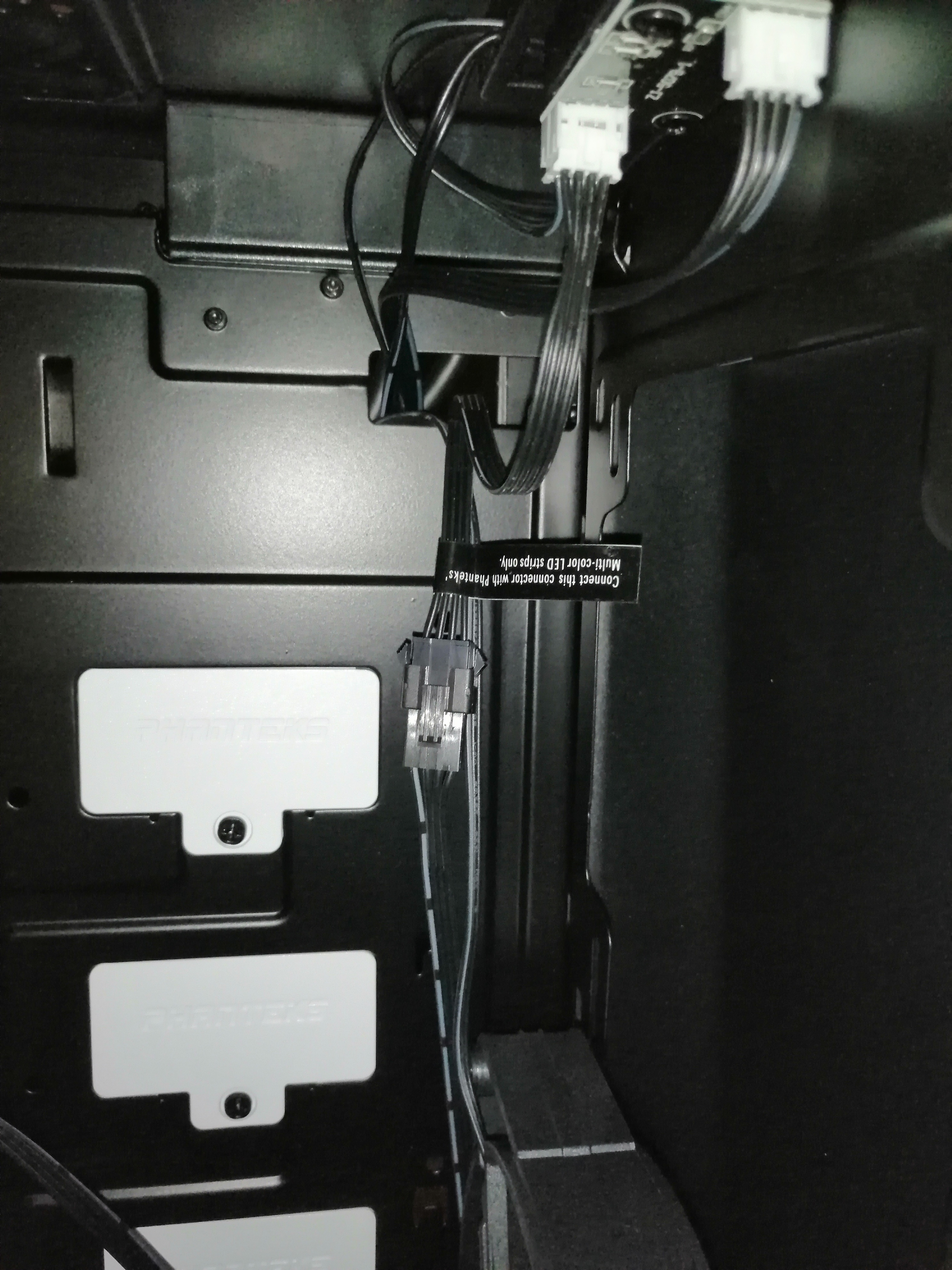 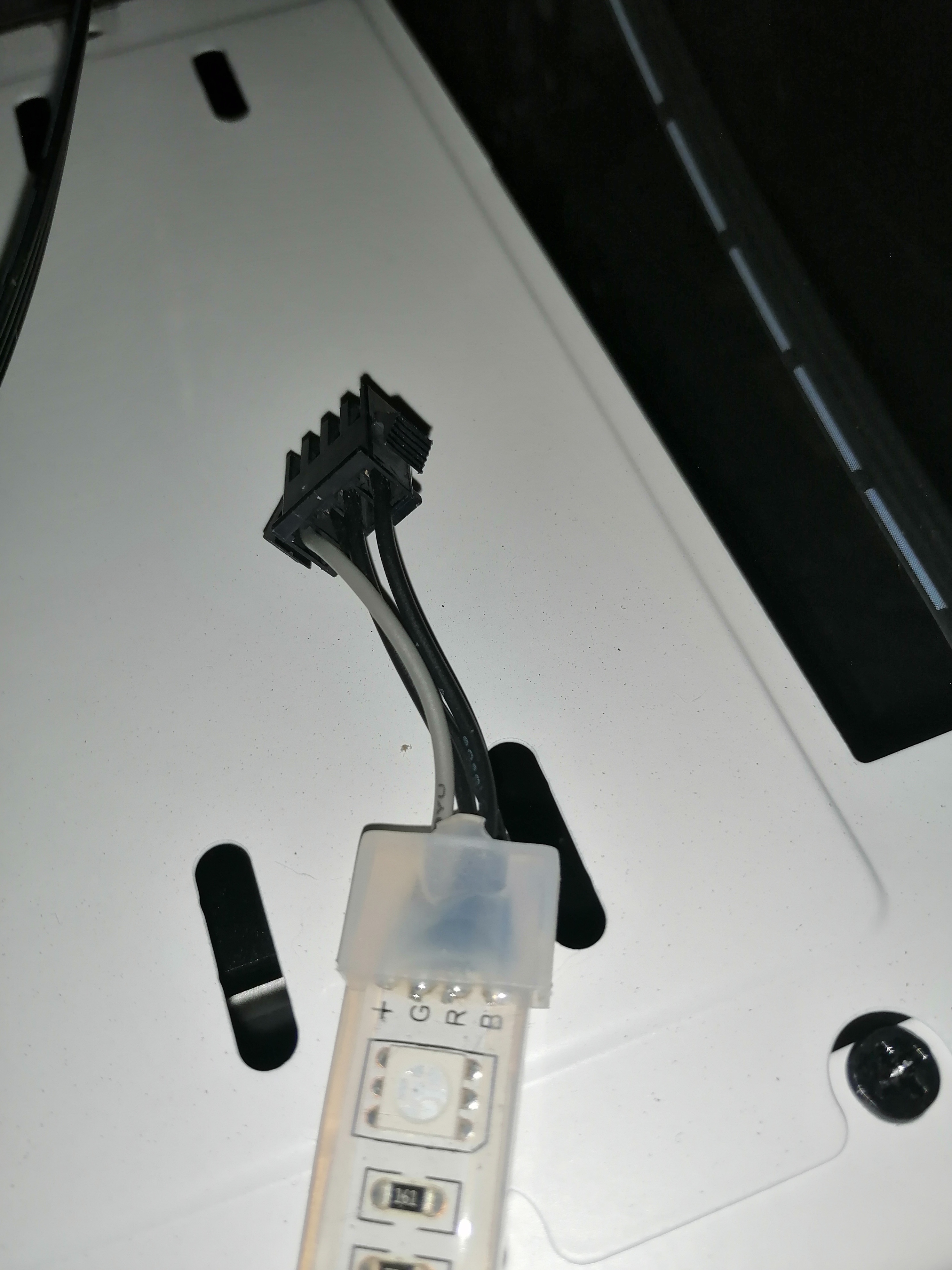 again all of it was fine and connected correctly besides of the RGB pin i had booted to windows on a old SSD /looking at bios for a hour or so , before plugging that in wrong at first it didn't turn on the lights so i turned it off then plugged it and put it back in then the frying happened i think it must of been because i didn't wait and unplug it from the PSU only powered it off

What exactly is printed on that black tape just before the connector?

I can make out some of it but not sure about the rest. Seems to imply some sort of proprietary connector requirement.

Not directly sure what went wrong. Overall, very likely that a short circuit was created and the resulting spark "hit" the motherboard as the current found a way out. The excessive current is what fried that area of the motherboard.

Re-read the motherboard's User Guide/Manual and all other documentation for installed components.

Even if connections physically fit/match that does not mean that the connections are correct.
0

Ralston18 said:
What exactly is printed on that black tape just before the connector?
Click to expand...

"Connect this connector with Phanteks' Multi-color LED strips only."

The last picture in post #3 looks like the LED strip - not plugged in
- but in the picture with the label, something is definately connected to the LED-strip only connector... and it doesn't really look like it is actually the RGB LED strip which is connected, but it is hard to tell for sure
Last edited: May 22, 2020
0

" in the picture with the label, something is definately connected to the connector for the LED strip-only connector"

Trace the wire to the other end: "something connected" (my quotes) should not be an open question.

You need to know what that "something" is, why is it connected, and should it be connected.

That is why the documentation becomes important. Including all notes and fine print.

All the more so if proprietary components are installed.
0

" in the picture with the label, something is definately connected to the connector for the LED strip-only connector"

Trace the wire to the other end: "something connected" (my quotes) should not be an open question.

You need to know what that "something" is, why is it connected, and should it be connected.

That is why the documentation becomes important. Including all notes and fine print.

All the more so if proprietary components are installed.
Click to expand...

I was a bit hesitant to reply because I didn't want to cause extra confusion, but I think I did anyway by replying.. -I apologize.

I didn't want to point fingers at OP, I just wanted to point out, that it looks like "something" isn't connected in the correct way, and should be investigated further - like you've been pointing out to OP the entire time

- it was meant a bit like "a second opinion" agreeing with you.

Sorry for the confusion I seem to have caused instead, that wasn't my intention.

However, it looks more like a pwm fan is connected to the RGB LED Strip only-connector, rather than an actual LED strip.
Last edited: May 22, 2020
0

Generally helpful to have a "second opinion" and/or additional input.

Also, all too easy on this end (for me anyway) to sometimes lose track of thread participants and their respective posts.

Overall, my response (#7) directed to the OP still stands.

to add to your question on 7 that picture with label is the same RGB strip in last picture just the other end that i had tried plugging in that's shown resting on the bottom of my case ,it's starting to sound like i did the most common thing you're not suppose to do plugging the fan RGB wrong ,outside of everything else that i read closely the rgb stuff was the only thing i wasn't to sure about and did look up and this is how i got here.

i ordered a psu tester as a start wont be a while till i can get another motherboard that i'm aiming for due to shortages everything seems to point towards it just being the MB from other people that have done it but you never really know.
You must log in or register to reply here.
Share:
Facebook Twitter Reddit Tumblr WhatsApp Email Link