I'm having a problem where my computer is just plain loud. I have a mini-itx case and it's way louder than the mid tower I built for my wife. I'm not sure whats causing it but I think it might have something to do with air pressure. When I take the front panel off it does get noticeably quieter but still loud. I think it's the pressure because when I go to put the front panel back on I can hover it about 1-2 inches and the air pressure will literally suck the panel back into place.

The case I am using is a Corsair Graphite 380t. I bought a Corsair H100i RGB PLATINUM AIO Liquid CPU Cooler, 240mm, Dual ML120 PRO RGB PWM Fans and 3 Corsair LL Series LL120 RGB 120mm Dual Light Loop RGB LED PWM Fans. I placed the two ML fans that came with the cooler on the front of the case for intake and the 3 LL fans at the rear and radiator as outtake. I also have a GIGABYTE GeForce RTX 2070 Super GAMING OC 8G Graphics Card, 3 x WINDFORCE Fans, 8GB 256-Bit GDDR6, GV-N207SGAMING OC-8GC Video Card. The card has 3 fans with I believe are intake as well. The 380t case has a fan controller button and I've hooked up the two front intake fans and the rear outtake fan to it while letting the radiator fans be controlled normally by the AIO cooler software.

The ML fans have a CFM of 75 and the LL fans have a CFM of 43.25 so I have a total of 150 CFM in and 129.75 CFM out. Im not sure if the graphics card is contributing to the pressure or if its isolated because for the most part the fans don't even spin while the graphics card is idle. Just based on the math I should be looking at positive pressure but I know thats not the case based on the front panel thing I mentioned earlier.

How can I fix this guys? Should I cut a fan off the front and run the radiator in push pull and make sure they are all LL fans so they have matching CFMs? Should I take the fans off the case fan controller? I don't know where to start but I am willing to buy more LL fans (not the ML fans for aesthetic reasons) if I need to.

Below is a picture with the panels off for better reference. 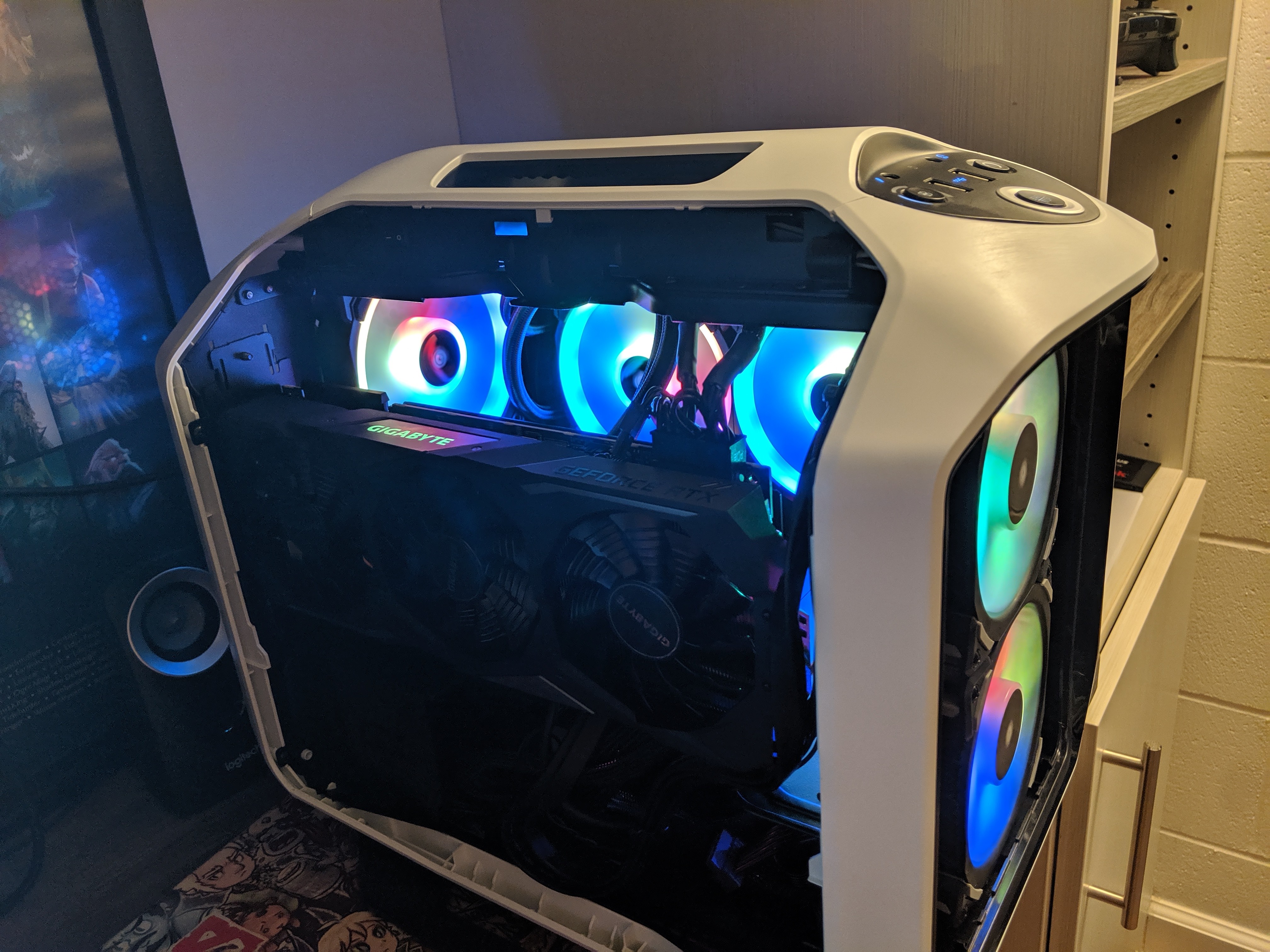 those are loud fans when operating at full speed. i would set the AiO cooler's fan curve profile to start @ ~25% & max at ~70%. the same with the GPU fan profile. and just leave the case fan controller at lowest or maybe medium speed.
what temps are the CPU & GPU hitting currently?

if you have the radiator's two fans + the rear fan blowing out and the front two fans drawing in, that leads to negative pressure. 3x out / 2x in. the GPU facing the side vent would probably add a bit more intake when at full speed so they may just even out. but pressure doesn't = noise.
it's disk drives and fan's operation that produce the noise. i would guess the sound diminishes when removing the panels because 1) there is less friction(air hitting the vents) and 2) better airflow which leads to better system-wide temps so the fans decrease in speed some.
Reactions: Phaaze88
0

So I did some troubleshooting when I got home and I discovered the cause of my problem. I ended up disconnecting the two ML intake fans on the front from the case fan controller and it became instantly quiet. I believe the corsair 380t fan controller is pumping too much juice for the ML fans even on its lowest setting and its causing the fans to have a high RPM. The LL fan in the rear that is also connected to the case fan controller is whisper quiet. I'm going to buy two LL fans tomorrow to swap out the loud ML fans.

As far as fan curves go what temp should I consider maxing the fan speed?