TL: DR-- I HIGHLIGHTED BLUE FOR MY QUESTION AND USEFUL INFO, JUST IN CASE YOU DONT WANT TO READ THE ENTIRE HARRY POTTER BOOK I POSTED, BUT I ALWAYS TRY TO BE CLEAR, EVEN IF THE POST IS LONG, TO GIVE EVERYONE EVERYTHING THEY NEED IN ORDER TO ANSWER EASILY. Thanks!

alright so let me start off by saying.. I'm in a discord group that basically solely posts fire sales for electronics, that's how I managed to get my 3090+3080 and a few other goodies at cost, even though Nvidia ROYALLY fudged up the launch!! (but that's for another time) anyway one of the sales I scooped up 2 Adata 1TB sx8200 pro's brand new for 79$ a piece, and registered them both to verify warranty, and also verified that hadn't had so much as a megabyte wrote on either, they were indeed brand spanking new so this isnt a "you got bad sticks" moment lol

Anyway, I didn't want to jump on the Samsung bandwagon and pay 130+ $ for a 970 Evo/Evo plus 1TB when I could almost get 2 for that and seeing the read/write claims, it was worth it seeing as they weren't far off from each other.

HOWEVER i did see/read that ADATA switched to a slower controller, and NAND on the sx8200 Pro, i was aware when i bought them. However, the real-world performance based on a few benchmarks i saw were completely negligible and didn't deem the 79$ price tag unworthy as its still a solid NVMe with solid middle of the road speeds. changing out the SM2262EN, for the slower-clocked SM2262G didn't seem like a deal-breaker.

I'm getting around 890 Mbps sustained writes on user benchmark. I know not the "best" benching program but still, it shows what OTHERS are getting with the exact same products so, therefore, shows where I'm at with the same products. I'm at 55% percentile with my sx8200pro's, one is 55% one is 58%, I've swapped m.2 ports, tried using a PCIe to nvme adapter in the x4 slot, everything I could think of, and nope! still horrid sustained writes.

So basically im asking for A) why doesn't my 970 Pro 512GB give a hoot about the size of the file, sustained write/reads are solid throughout, same with my WD Black NVMe.. but this adata sustained writes are horrid... so is it my PC/Setup?? B) can anyone with an sx8200 pro post their disk mark speeds??

I just cannot see a controller/nand change causing almost a third of the "quoted" performance that ADATA claims. honest 800Mbps sustained write from an NVMe is pure garbage nowadays and will gladly return them and jump on the unfortunate Samsung bandwagon but wanted to post to the geniuses on here to see what their speeds are...

system specs are in the signature as it could be something I'm doing as well, if so then I'm all ears.. ill attach my latest userbenchmark run as well ...

THANK YOU ALLL IN ADVANCE! YOUVE ALWAYS CAME IN CLUTCH AND I APPRECIATE IT!!!!!!!!

The SX8200 Pro is going to have poor steady state performance due to its design...you can read my Reddit posts for more information on that. You calling it "pure garbage" shows a lack of understanding - TLC mode when folding is going to be way slower than SLC. For example, SLC tPROG is around 200µs and might hit 130 MB/s per die (two-plane dies) while BiCS3 is rated at most for 55 MB/s for TLC mode which is then halved when folding - this is like 1000 MB/s (native TLC) vs. 500 MB/s (folding TLC) vs. SLC mode which can hit 3000 MB/s, at 1TB for example. This is the nature of SLC caching. The 970 PRO uses MLC and has no SLC specifically for good steady state performance.
Last edited: Dec 16, 2020
0

sorry for the late reply, been on vacation with the family.

very informative post, but i do have one question.. has this always been the case?? because i have seen benchmarks all over online of the exact same drive prior to adata swapping controllers, and the sustained writes were where they should be.. not under 1000mbps second and definitely not 800mbps.

looking at a few CDM runs right now and seeing an easy 1,500 sustained write on 4-5 different drives, but all were prior to the controller swap?? i didnt think it impacted performance that much real world, or they could of just got the "reviewers sample". just curious
0

It all comes down to how TLC and SLC caching works.

Here's from an Anandtech article that has your drive as part of the tests: 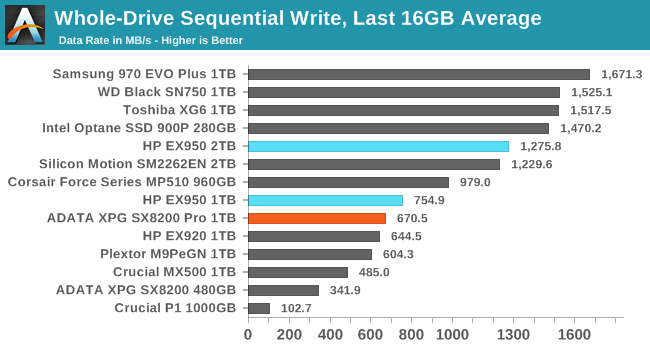