After many hours and days of testing in games and benchmarks , I finally found the sweet spot on oc and undervolting my rx 570. I use msi afterburner and I have 2 profiles for different type of games.

I use my profile 1 for light games and profile 2 for heavy games like cyberpunk 2077 for example. I always used msi afterburner instead of the adrenalin software from amd , cause I don't like it, msi afterburner is easy to use and monitor your temps/clocks and what not on screen display in games.

I've noticed that sometimes , msi afterburner won't apply the undervolting profile , interestingly it applies the oc profile but not the undervolting , then I quickly observe the high temps and I have to restart my pc and reapply the profile and test in games to see if the temps and voltages are good. It's annoying cause I don't know what causes it to not properly apply the entire profile when I chose to..

Any thoughts ? I always update msi to the latest version and always use latest version of amd driver even though I tested with older drivers and still the same. Feels like some kind of compatibility bug between msi and this particular gpu I have. I had in the past a 1050 ti and the undervolting/oc went smooth , profiles were applied properly every time.

I really don't wanna use adrenalin soft from amd cause that won't let me have a constant custom fan curve and overall it's annoying. I can live with this weird msi profile bug or whatever it is but maybe someone knows the exact cause.
0

If you hit Ctrl+Shift+O (the letter) you will activate radeon overlay which displays the performance metrics you've selected within the AMD Adrenalin "Performance" tab (eyeball icon next to the metrics that will be displayed in the overlay, click the eyeball to disable that metric which will change the icon to an eyeball with a strikethrough).

Are you sure you're not just using Afterburner because that's what you're used to and/or more familiar with compared to AMD Adrenalin? Cuz AMD Adrenalin does all the same things that Afterburner does, arguably in a more simplistic way for undervolting also. Hitting Ctrl+F in afterbuner to show the frequency/voltage curve to edit isn't something that most people know about from my experience. Most people are stuck using the offsets they see in the basic afterburner home screen. Whereas, AMD Adrenalin clearly shows toggle switches that let you know there's more functionality/granularity able to be activated, vs Afterburner's hidden hotkeys.

Windows can interfere with GPU profile settings in Afterburner and AMD Adrenalin on cold boots. I've had mixed success by turning off Windows' "fast startup" within the power options. A restart always fixes the issue, if/when it happens.
https://lifehacker.com/enable-this-setting-to-make-windows-10-boot-up-faster-1743697169

Not sure why you need a custom fan curve. I've never seen the need. The default 75C target has always served my needs just fine. After re-pasting my GPU, its inaudible at 1300Mhz, and at 1375Mhz the fans only ramp to audible levels in menu/load screens.
Last edited: Wednesday at 12:56 PM
0

I found a solution after all , I will use amd adrenalin soft to apply my oc profiles(without enabling fan control) and I'll use msi afterburner strictly to apply only the custom fan curve, now my profiles and voltages apply as it should and I'm also happy that I can still use my constant fan curve with msi.

If I could use a constant fan curve in amd adrenalin too , then I wouldn't need msi anymore. I don't like the fan gradually increasing with the temperature, cause at certain rpms it has a humming sound. I set my fan curve like this in msi. When gpu hits 60C , fan instantly goes from 0% to 46% and stays there until the card hits 85C then fan goes to 50% just to not hit 89C cause then it throttles.

@tennis2 Yeah I've seen people with 1290mhz doing lower than 1V , after many many tests those are my stable overclocks , weird but it works. Also gpu-z says my card has 80.7% ASIC quality "Your card's ASIC Quality is higher than 85.9% of similar GPUs in our validation database." don't know what kind of overclocks I should get with this asic rating.
Last edited: Wednesday at 2:37 PM
0

I don't put much stock in the AISC quality thing. I'm not sure how GPUz even determines that. The only thing that matters is what clocks you can hit at what voltages.

I'm sure you have, but in AMD Adrenalin, Performance, Tuning, did you activate: 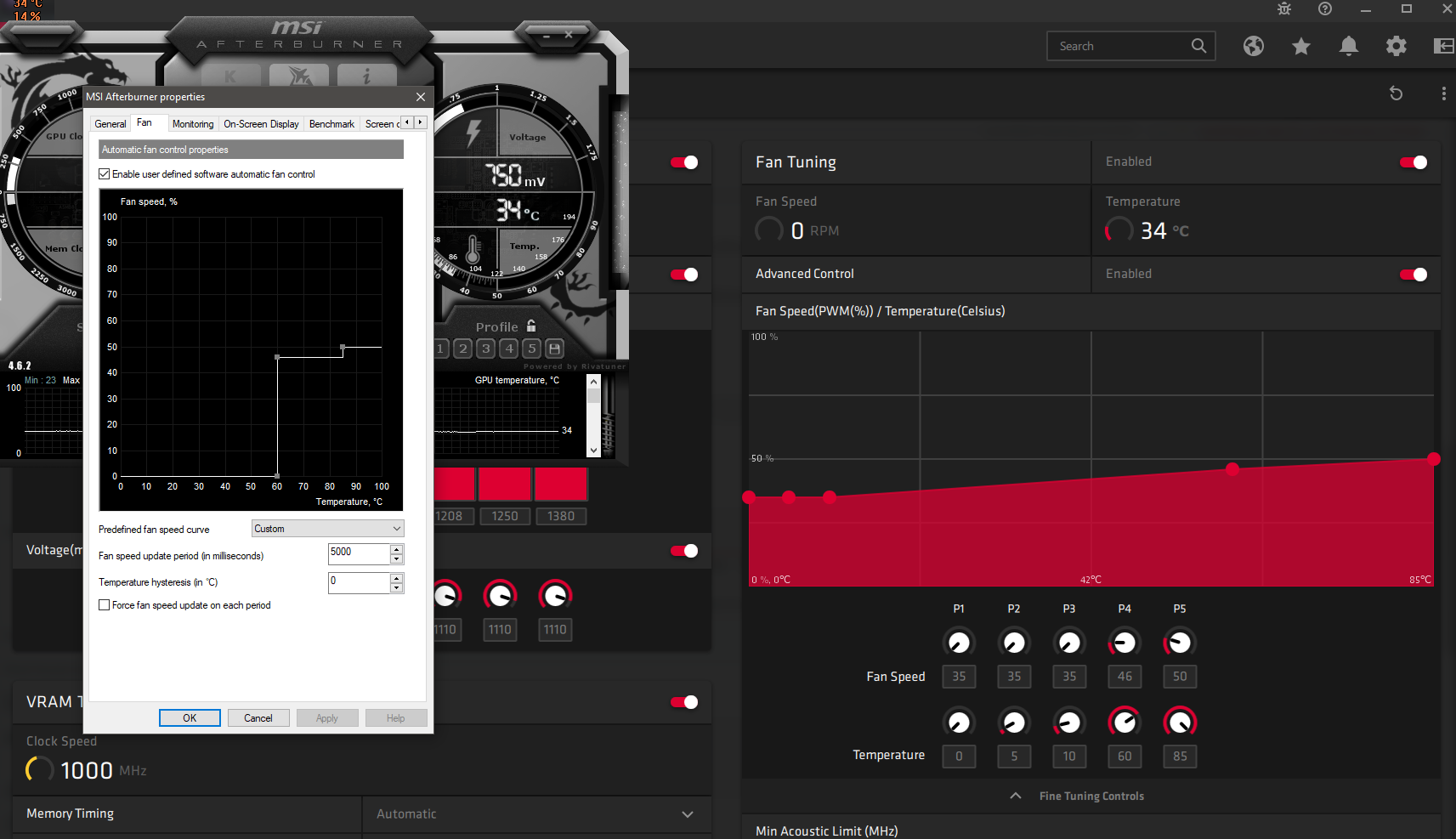 Yes, I activated fan tuning but I want the fan to turn on when gpu hits 60C and stay at 46% until it hits 85C then stay at 50%. I can't do that in amd adrenalin , but I'm happy I can still use the msi fan curve without anything bugging out between these two softwares.
0

Yeah, the closest you can drag the points in Adrenalin is 5C apart. If you set the ramps at temps your GPU is unlikely to hover around (ie, mine doesn't spend much time in the 63-68C range), you'd end up with the same result, but it sounds like you've got something that works for what you want, so nbd.
You must log in or register to reply here.
Share:
Facebook Twitter Reddit Tumblr WhatsApp Email Link