Yesterday when I got home from work, I discovered my PC in a sleep state and not logged in. I also discovered my mouse and keyboard were not working. I tried with some other USB devices and checked all ports (front and back) to find none of them working (code 19 error). I used teamviewer from another device to connect. After troubleshooting that for a while, I decided to check Windows update and installed some that were available. I also installed the optional update for version 2004. After that finished, I had a mouse and keyboard again. I figure some faulty drivers. Who knows.. its Windows. Don't know if relevant, but I'll mention that the PC also blue screened a few times while I was restarting and troubleshooting the original issue with the following stop codes: KMODE_EXCEPTION_NOT_HANDLED, MEMORY_MANAGEMENT, SYSTEM_SERVICE_EXCEPTION.

Anyways... the new update is in. I notice the computer is awfully slow when trying to open programs or install anything. I notice that Windows Cryptographic Services is running high disk usage in the task manager. No idea what cryptographic services is, googled a bunch, tried some troubleshooting (I couldn't tell you off hand what I did as I tried a bunch of things.. just can't remember), and came up with nothing. I try to do some more Windows updates and hope it fixes it. The updates fail: 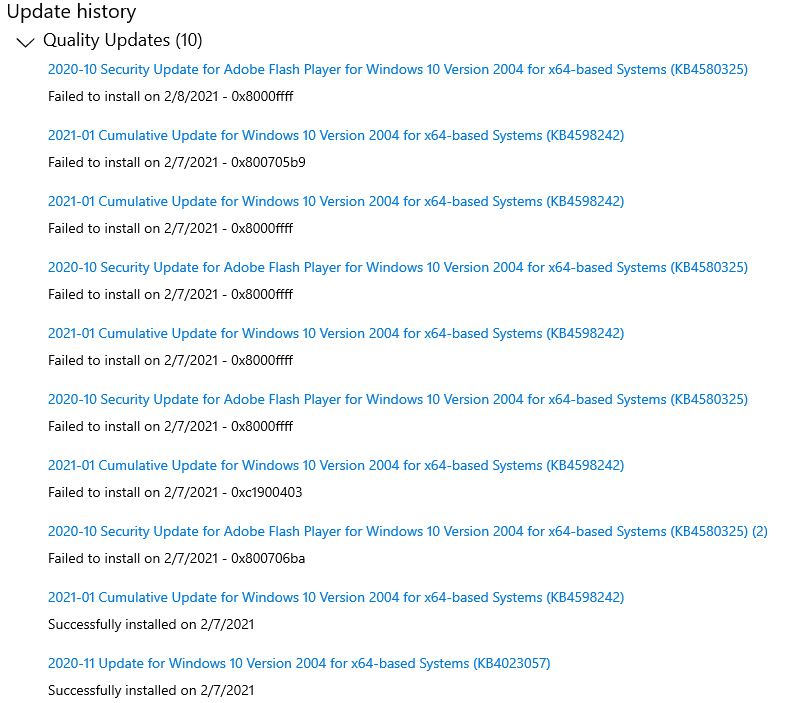 I try to go digging into some other Windows stuff (task scheduler, event viewer, etc..), it will take several seconds to load, and then I am met with User Account Control saying the app has been blocked for my protection: 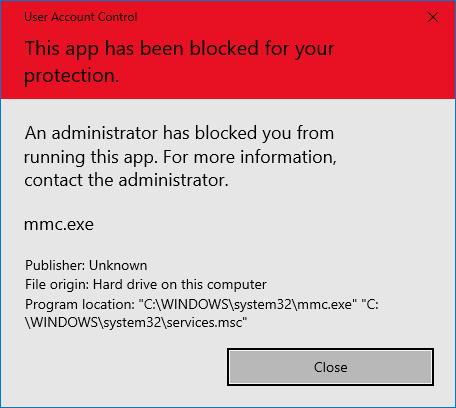 This is where I have given up. I have no idea what it wrong and I can't event dig around to find out much more info. Is this some type of malware, or is this just Windows being Windows? I figure my only option is to do a clean Windows install, but I wanted to post here and try to fix it before nuking it.

You might want to check and see what BIOS version you're on for your motherboard. If you are the administrator for the platform, you shouldn't be seeing the above errors. Regardless, since too much resources have been dropped into the system, IMHO, I'd advise on backing up any and/or all critical data, then making sure you're on the latest BIOS update and then reinstalling the OS after you've fabricated your installer using Windows Media Creation Tools.
0
M

Lutfij said:
Welcome to the forums, newcomer!
Click to expand...


Lutfij said:
You might want to check and see what BIOS version you're on for your motherboard.
Click to expand...

My ASUS utilities (how wonderful they are) said there was no need for an update, but I did a little digging. Turns out my BIOS version was pretty old. I just updated that (v0607 to v1003), but no improvement.


Lutfij said:
If you are the administrator for the platform, you shouldn't be seeing the above errors.
Click to expand...

This is especially what baffles me. This is my personal home computer. I am the only account on it, and I have UAC warnings disabled.

I think that's the only option left.

Little update to this.

I kept BSODing every now and then (multiple times a day, usually while away) with a MEMORY_MANAGEMENT stop code. I couldn't even back up any files without the drive usage maxing out (from cryptographic services) and/or BSOD killing the process before it could even begin. No spare drives to put a windows install onto, and I was just fed up at this point.

I had trouble even loading the windows media tool onto a USB. It kept failing for whatever reason, and fix 2 here is what solved that. Once I got that loaded onto the USB, I chose to install windows and keep files/settings in a last ditch effort to salvage what I have. This brought me up to version 20H2, and after about an hour of using it, it seems to be back to "normal" now. I am able to open programs (and they open instantly), nothing appears to be blocked by UAC, I can actually install updates through windows update, and I haven't seen cryptographic services in my task manager yet (hogging the top, or at least anywhere near it).

Time to cross my fingers and hope I can backup what I need and install a fresh copy of windows before things go haywire again.
0
P