This issue is essentially the same as USB Transfer Speeds Mystery but that thread is not open for further replies.

My setup
Corsair Flash Voyager GTX 1 TB
Lenovo T470 and T480 computers, both with internal SSD's
Windows 10 on both
Copying a 100 or 300 GB TrueCrypt file from the internal SSD to the USB stick 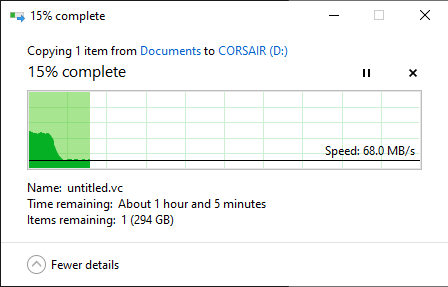 If I pause the transfer and resume, the speed briefly spike back up before quickly returning to the slower speed. 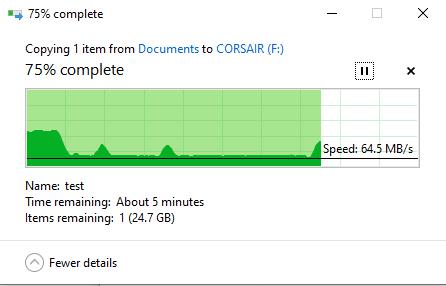 Attempted fixes
I had an issue with another manufacturer's USB stick write speed last year which was tied to it being formatted exFAT instead of NTFS. My Voyager was already formatted NTFS, but I tried exFAT anyway. Speeds were still slow after a few minutes.

It seemed like the write speeds stayed fast longer on the first try of the day but got slower in less time if I retried copies. The Voyager gets warm to the touch during these writes. Thinking perhaps it was related to heating, I tried to cool the Voyager but this didn't help.

I've searched other forums which had several suggestions:
Am I using USB 3.X not 1.0/2.0? Yes.
Tried different USB ports? Yes.
Is it just the cache running out? Clearly not if the transfer speed is fast for a few minutes at 300 MB/s.
I've tried disabling write cache on the drive.
Do I have a background process or antivirus slowing things down? ?Not that I can see - the Task Manager shows relatively low CPU and memory utilization. I've also tried booting into safe mode.
I've tried two computers.

Corsair claims 190-470 MB/s max write speed. The single file I'm using should be much faster than many small files.

Corsair support has offered a hardware swap under warranty, but isn't admitting a known hardware problem. Frankly, I'm doubting this would be fixed by simply replacing the drive.

I haven't exhaustively updated drivers, BIOS, etc. I was hoping for some guidance before investing a lot more time.

Thanks in advance for the help.
0

This is absolutely normal for these devices.
The cache fills up, and speed drops.
0
A

USAFRet said:
This is absolutely normal for these devices.
The cache fills up, and speed drops.
Click to expand...

Please explain further. It isn’t clear to me how cache explains what I’m seeing. Even just 1 minute (shorter than the time my drive sustains 300 MB/s before slowing) would be 18 GB of writing. Caches are much smaller than that, so why does the write speed slow after minutes of sustained high write speed?
You must log in or register to reply here.
Share:
Facebook Twitter Reddit Tumblr WhatsApp Email Link