[SOLVED] Vertical line changing from color to grayscale depending on position - why?

A strange problem -- just arose yesterday, I think, after no hardware or software changes that I am aware of.

If I draw a vertical line, either in Autocad or in CorelDraw, I can make it completely red, green, or blue. Then if it move or copy that same line over a few pixels, it turns gray. Copy it again a few pixels further over, it goes back to red, green, or blue. Seems to happen with other colors as well but since those are the pure pixel colors that is easiest to describe. This effect happens if i move the line over physically, or if I pan or zoom my view in the window -- so the color change seems to depend on which physical vertical line of pixels the line is in, rather than where it is in the conceptual "space" of the application. It only happens with vertical lines, not horizontal.

I can also see this effect somewhat in text on folder names, etc. in Windows. So it does not seem to be tied to a specific application.

Monitor is an LG 27UD60-B 27" 16:9 UHD IPS 4K Gaming Monitor LG27UD60B
Graphics card is NVIDIA Quadro P1000
Graphics driver just updated (same problem before and after update) current version is 461.09
OS is Windows 10 Pro, fully updated.
Display resolution 3840x2160 (native)
Since it is consistent across the entire screen, it seems to be a software/driver issue rather than hardware, but not sure. Does anyone have ideas?

Attached are some photos taken with my camera. First two are out a ways so you can see all the lines. Second two are zoomed in more. Dots on the screen are dust, not pixels. The vertical lines next two each other in all these are the same color -- so where a gray line is sitting right next to a red line, for instance, that gray line is actually red but is only displaying as gray.

Any ideas as to what is causing this, and how to fix it? Thank you! 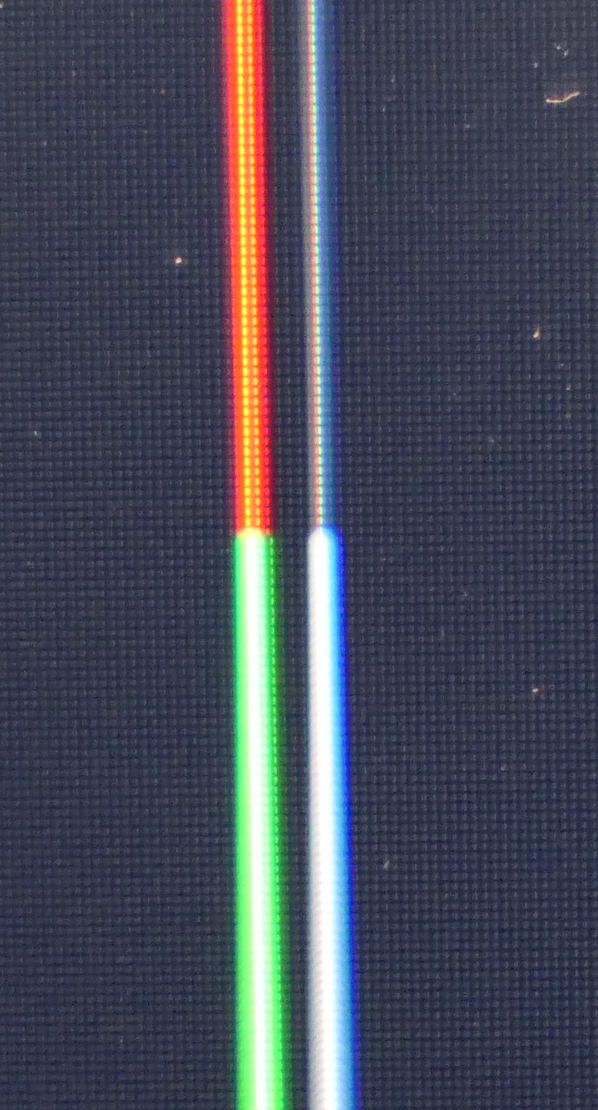 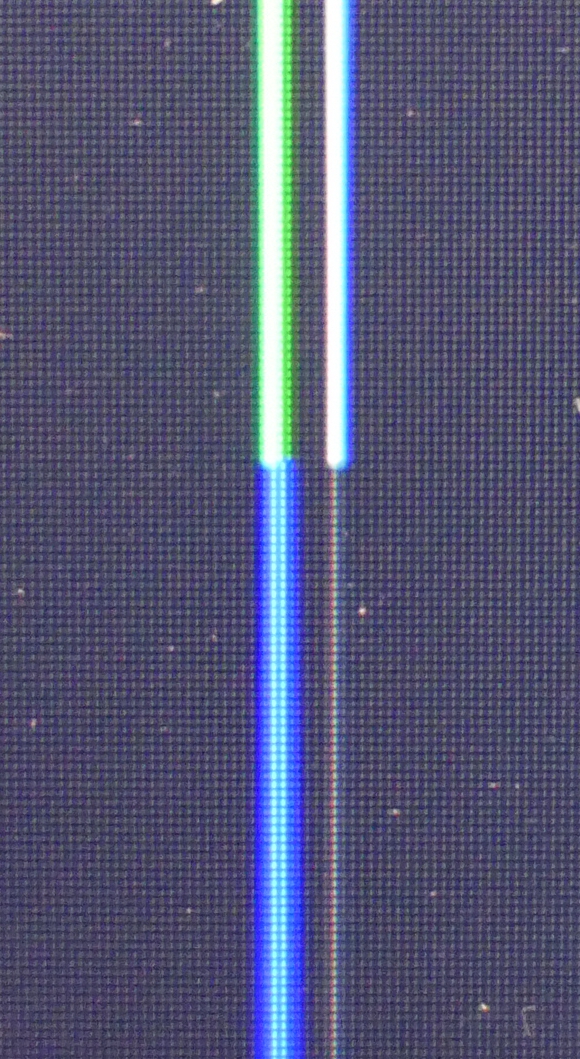 A postscript to this -- the problem only occurs when drawing a 1-pixel wide line. If I make the line 2 pixels wide, it appears correctly along both pixels, it seems.
0
R

I connected a second monitor (older, lower res) and it works fine, even when running a 2-monitor setup. Lines look ok on the second monitor.
0

Probably a sub-pixel sampling/anti-aliasing issue, ex.: the software/Windows/drivers apply anti-aliasing assuming the RGB pixel has one layout when the actual output device has a different RGB arrangement. Another possibility is sharpen and other filters causing subpixel weirdness.
0
R

Thank you for that reply. Do you have any idea why this would start being a problem, when it was not before? I did not change any settings before this happened, as far as I know. Any suggestions as to where there would be settings in Windows that I could check?
0
R

I think I found it -- went to the NVIDIA control panel > Change Resolution > Output color format (changed from to YCbCr422 to YCbCr444) and that fixed it. Don't know what happened there. I certainly did not change this earlier but maybe something else did.
0

Ok, yeah. RGB mode works as well and does seem a bit better color. I'll leave it there.