My Ryzen 5 2600 with the stock cooler is constantly going up to 90 degrees Celsius and at 60-70 degrees while idle. I have just ordered more case fans for better airflow in my case, and I am wondering if I should purchase an aftermarket CPU cooler. My GPU has temps at around 70-80 degrees while under load but i am experiencing frequent game crashes due to an error called d3d or something like that.

Every Ryzen CPU I've installed with the stock cooler has done poorly, despite so many out there saying they are capable enough and work fine. They don't. They don't manage thermals well enough and they have an annoying frequency/pitch to the hum they make. They are just not good enough for most Ryzen CPUs in my opinion.

You fan configured is wrong though. The ONLY fans that should EVER be configured as intake fans (Aside from in some few specialized mini ITX configurations) are the front, side and bottom fans. The top and rear fans should ALWAYS be exhaust fans and if you are using an air CPU cooler it would be wise to not use the middle or front fan locations in the top of your case. Stick to using the rear and top-rear fan locations as exhaust so that you are not "stealing" the cooler ambient airflow coming into the case from your front fans away from the CPU cooler and VRMs by sucking it directly out one of those middle or front top fans before it has a chance to offer any benefit to the CPU cooler or pass over the memory and VRMs to exchange heat away from those as well.

Top intake is not an acceptable configuration for any tower case regardless of CPU cooler type.

Your d3d error is probably related to outdated graphics drivers. There are a few other things that can cause it but that is the most prominent reason. Try doing ALL of the following:

make sure your motherboard has the MOST recent BIOS version installed. If it does not, then update. This solves a high number of issues even in cases where the release that is newer than yours makes no mention of improving graphics card or other hardware compatibility. They do not list every change they have made when they post a new BIOS release.

go to the product page for your motherboard on the manufacturer website. Download and install the latest driver versions for the chipset, storage controllers, audio and network adapters. Do not skip installing a newer driver just because you think it is not relevant to the problem you are having. The drivers for one device can often affect ALL other devices and a questionable driver release can cause instability in the OS itself. They don't release new drivers just for fun. If there is a new driver release for a component, there is a good reason for it. The same goes for BIOS updates.

Make sure your memory is running at the correct advertised speed in the BIOS. This may require that you set the memory to run at the XMP profile settings. Also, make sure you have the memory installed in the correct slots and that they are running in dual channel which you can check by installing CPU-Z and checking the Memory and SPD tabs. For all modern motherboards that are dual channel memory architectures, from the last ten years at least, if you have two sticks installed they should be in the A2 (Called DDR4_1 on some boards) or B2 (Called DDR4_2 on some boards) which are ALWAYS the SECOND and FOURTH slots over from the CPU socket, counting TOWARDS the edge of the motherboard EXCEPT on boards that only have two memory slots total. In that case, if you have two modules it's not rocket science, but if you have only one, then install it in the A1 or DDR4_1 slot.

The last thing we want to look at,

for now anyhow, is the graphics card drivers. Regardless of whether you "already installed the newest drivers" for your graphics card or not, it is OFTEN a good idea to do a CLEAN install of the graphics card drivers. Just installing over the old drivers OR trying to use what Nvidia and AMD consider a clean install is not good enough and does not usually give the same result as using the Display Driver Uninstaller utility. This has a very high success rate and is always worth a shot.

Also, upgrading to a better CPU cooler is a good idea and I can give you some recommendations on that if you like. As far as the case fans go, you should have three front intakes and one rear exhaust that came with that case. Adding a TOP-rear exhaust fan to help out the single rear exhaust fan it came with, would be a good idea. Case cooling, other than in unusual specialized configurations that are NOT standard tower style mid tower, full tower, microATX or similar configurations should pretty much always look like this for the most part, if air cooling is being used and for MOST AIO configurations. 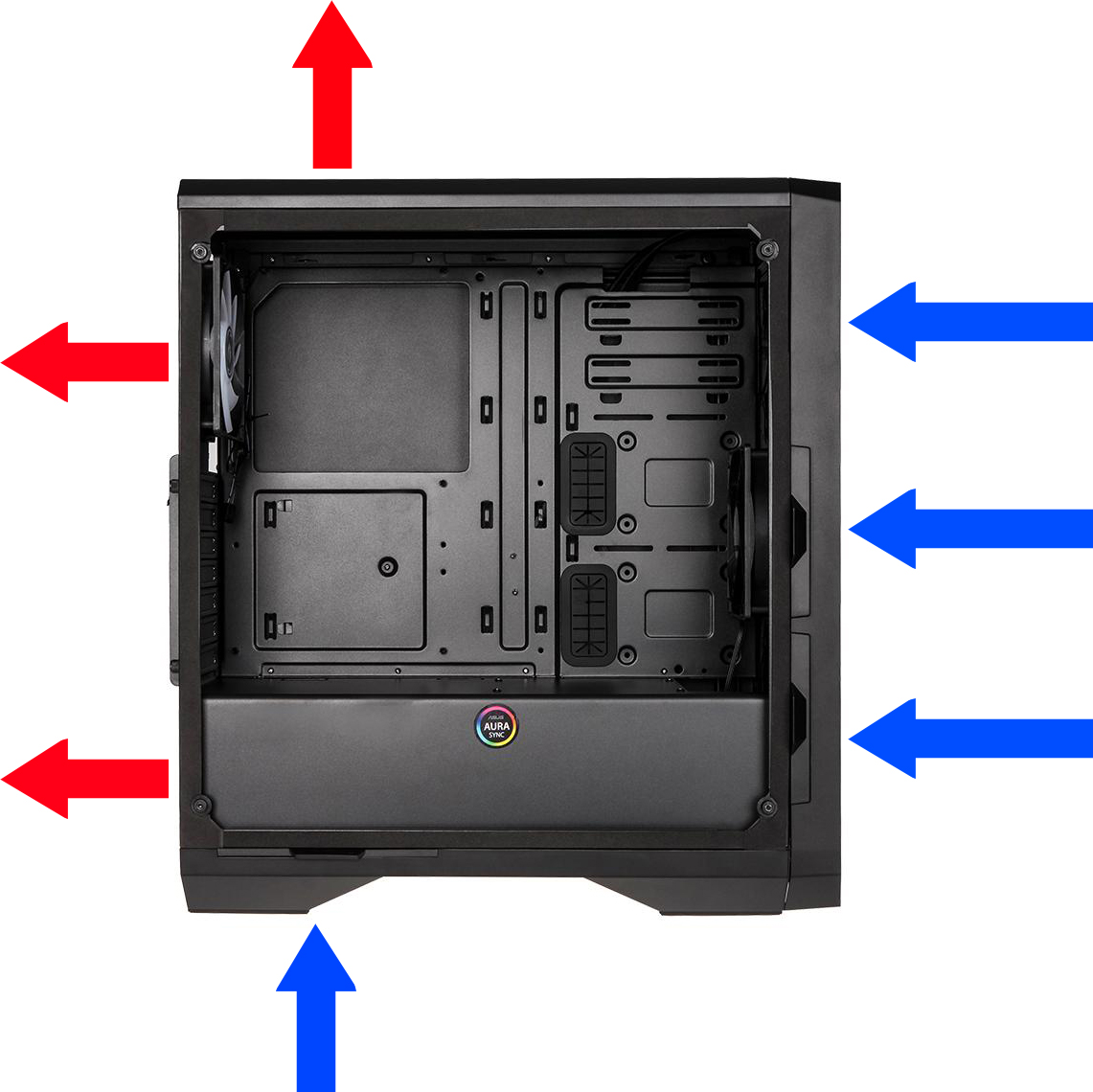 D3D would be the Direct 3D api - part of the GPU Drivers.

I replace the CPU cooler on the 2600 &2600x too, I used the "Artic Freezer 34 eSports Duo" for those on a budget but sadly the price is going up and they are often out of stock. The last time I bought some they were $38 shipped.

[edit] By the way, it typically drops the load temp to the mid 60's . I really like this cooler.
0

Darkbreeze said:
Every Ryzen CPU I've installed with the stock cooler has done poorly, despite so many out there saying they are capable enough and work fine. They don't. They don't manage thermals well enough and they have an annoying frequency/pitch to the hum they make. They are just not good enough for most Ryzen CPUs in my opinion.
Click to expand...

They're ok with the lower tier models in high airflow chassis. 2700X, 3700X and up, definitely replace it.
Granted, I've only had one build experience using one - Ryzen 2600 with a hand-me-down GTX 560Ti in a NZXT H500(stock configuration), for my mother, and she doesn't experience temperature problems.

But with the seemingly undying trend of choked airflow chassis - looks at the listed Thermaltake V200 - of course a barely adequate cooler will have problems.
Cooling is only going to be as efficient as what the chassis allows, and the V200 sucks in that department.


Agree about the gpu driver related crashing though.
0

Yes, that is a very good budget option. There are others as well.

The Deepcool Gammaxx 400 is better than the stock cooler, and better than a 212 EVO, and is about 30 bucks currently.

The Thermalright True Spirit direct 140 is just about the smallest 140mm cooler I've seen in a tower style heatsink, but it's performance is incredible, coming very close to matching the performance of some of Noctua's large dual finstack coolers. It's only about 43 bucks currently on Amazon. That is the cooler I've used on the three Ryzen 3000 series builds I did recently with one R5 3600 and two R5 3600x CPUs, and it brought all their max temps down by about 20°C and was WAY, WAY quieter.

I've compared the performance of the eSports duo with the Direct 140, and honestly it's no comparison. The Direct 140 is just a better cooler and for only five dollars more, if the Direct 140 will fit in a given case, it seems like a no brainer to me. But I'd definitely use the eSports duo if space or an extra five bucks, or availability, were issues.
0
J

Thank you for your advice, I will try everything that you said. Sorry that I am responding this late, because I did not think to check this thread until today.
0