Hi Everyone,
So very recently I bought a one month old IBuyPower build off of Craigslist.
-AsRock Phantom Gaming 4
-i9 9900k Cache Speed 4.5 Ghz BCLK Speed 100 Mhz Core Ratio 50 Cache Ratio 45 FCLK 800Mhz
-2080 ti
(I did have not changed any settings at this point, IBuyPower may have altered settings, but these settings were how I received the computer)

Now when I run Cinebench my CPU maintains a constant 5Ghz, but temps jump to 90C very fast. To make matters worse my fan speeds dont seem to be affected, furthermore I cannot alter the fan speeds in either the bios or through AsRocks proprietary software. These are IBuyPower RGB Fans.

I'm worried that the CPU Cooler which is a 120mm x 2 IBuyPower Radiator may have a proper connection to my CPU. Later today I'm going to take the computer apart to see if the contact is properly made to the CPU. I'll also check fan connections to try to diagnose my constant, low RPM, fan speeds.

Has anyone run into issues like this before? Why is my Mobo not thermal throttling my CPU? I'm not looking overclock I just want to achieve an average Cinebench Score with average temps.

Your CPU will only start to throttle around 100c, though 90c can be detrimental to your CPU in the long term.

The issue is the I9 9900kf runs INSANELY hot. No 240mm aio is sufficient to cool the 9900kf, and certainly not whatever cheap 240mm AIO IBuyPower used in this PC.
Reactions: CalmlyTilted
0
C

So what are the solutions regarding my issue? Should I lower CPU core voltage? I definitely don't want my computer hitting 100C.

I can revert to my previous settings, yet I will only achieve 3.6 Ghz during high loads (benchmarks...ect).
0

You can try a CPU undervolt, as long as you do it correctly and stress for stability.

What case does this PC use? You may be able to throw in a beefier cooler, but this will be expensive.
0
C

This is the case, its an IBuyPower Case called Element Pro. I just looked an I cannot find any retailers selling the case alone. 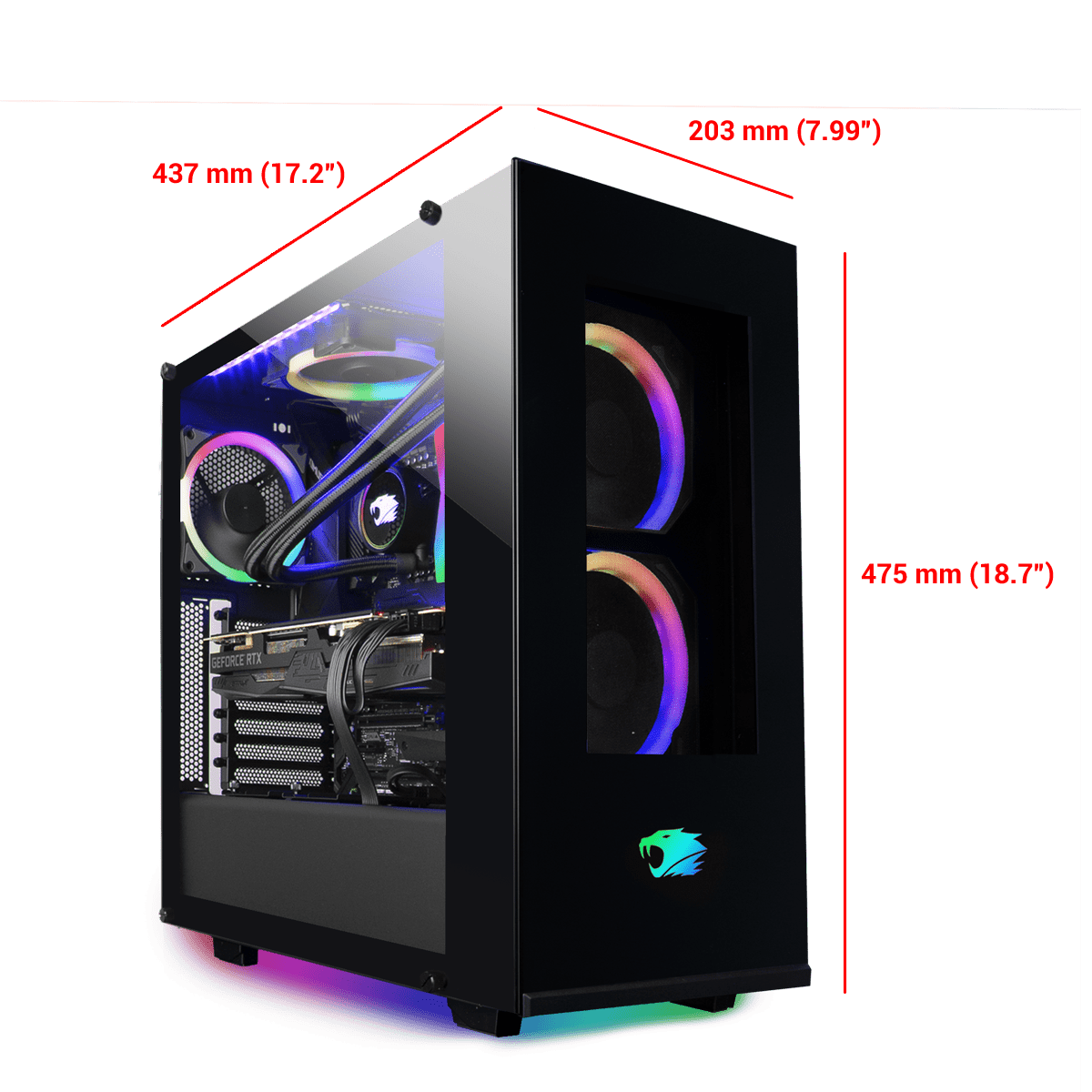 Mine actually has the exact same setup with the radiator coming from the front and the same ROG 2080Ti.
0

Pretty sure this case is just an Ibuypower modified NZXT S340 elite.

The standard NZXT S340 elite (not sold anymore) can only fit up to 280mm aios. Since the S340 elite cannot fit large air coolers, so the best performing cooler supported by that case would be a 280mm aio.

However, a 280mm will not improve temps enough to justify the extra money.

Also, under an all core Cinebench run, the 9900k should not run at 5.0ghz, so i suspect MCE is enabled in bios automaticallly overclocking the CPU and raising temps. Disable MCE in bios.

Then undervolt if needed.
0
M

You have the all-core turbo set to 5 GHz via MCE mode (which generates 9900KS levels of heat!), or was that was a single core speed?

You can, within Intel's XTU, easily step down from default 4.6 GHz all-core turbo to whatever (4400 MHz?) keeps temps at ~80-85C within your current cooling budget/capabilities...
0
C

So I just looked through the bios and searched online about MCE. Apparently AsRock's phantom gaming 4 does not have this feature available in the bios.

I think it has to do with me changing the power and current limits.

Which would be more appropriate, changing the power and current limits back or bringing the core speeds down. In both situations I am able to achieve 5ghz. But with the limits so high, my temps are outrageous.
0

You have a top end PC with the 9900KF but sadly the case is not that great with airflow at a minimum and not very flexible. I would look to a new case at some point especially something with a mesh front like the Fractal Design Meshifi C, Cooler Master H500P Mesh etc which will make a fairly decent difference and will allow for better cooling options.

As others have mentioned you can drop the MHz down to something more manageable and probably looking at reducing vcore would be a good option as I would not be surprised if it was on some auto setting that always tends to add more vcore than necessary.
Reactions: CalmlyTilted
0

Also the Phantom Gaming 4 is not the best for overclocking the 9900K...but it has a 'advanced Turbo' setting in OC Tweaker within the BIOS, make sure this is not on but off...Also I have noticed it does have MCE again on the OC Tweaker section of the BIOS page 59 of your manual. Also drop the AVX by 2 if AVX is fully on...

MCE should be under OC Tweaker and then CPU Configuration and the CPU Performance mode...
Reactions: CalmlyTilted
0

This is a prime example of why NOT to buy a prebuilt like this.
Insufficient motherboard, cooler, and case for the components housed therein.

First, undervolt the CPU and ram up fan and pump speed (pump should always be max). This is free and may help your CPU out.

Next, if that doesnt solve it, either underclock and undervolt CPU further, or buy a better case and 360mm aio.
0

NightHawkRMX said:
This is a prime example of why NOT to buy a prebuilt like this.
Insufficient motherboard, cooler, and case for the components housed therein.

First, undervolt the CPU and ram up fan and pump speed (pump should always be max). This is free and may help your CPU out.

Next, if that doesnt solve it, either underclock and undervolt CPU further, or buy a better case and 360mm aio.
Click to expand...

I think it depends especially if he got it for a good price as he bought this of Craig's List...If he did get it at a good saving with iBuyPower already being fairly cost effective then it will be a good foundation which he can fine tune and upgrade as he goes along and have one hell of a system with a 9900K..changing the case and a better AIO down the road should not be too difficult...for the moment even at stock it will still provide fairly stellar performance and you do learn.
0
C

I'd like to say thank you all for your support and guidance here.

I'm not particularly interested in overclocking. I just want to benchmark average scores for a 9900KF with average temperatures.

For those interested I payed 1600 for the build. Which is why I was able to rationalize the Mobo and case/fans.

I read through the manual for the Phantom Gaming 4 and while it mentioned that in the CPU Overclocking tab I should be able to manage MCE, I couldn't find it. I included pictures of my bios for proof. I just updated the bios which gave me no new options.

With the settings available do you have any recommendations?

I would like to add:
When I updated my bios all of my settings reverted to default. I just ran Cinebench and achieved a score slightly below average with max temps of 78. Maybe I should just leave my settings as is. Although still my fan speeds appear to be constant. I'd imagine if I was able to increase the fan speeds I could squeeze some more performance out of this guy.

Although my issue is now fixed... is it even worth messing with it?
0
C

Attached is the EZ mode of the bios. As you can see the top right corner says advanced mode. Which is the mode I was in when the pictures were taken. Try updating the bios to the latest version.
1

I think you are fine now especially as you are not overclocking....When you do upgrade, go for something like the Gigabyte Aorus Pro or Aorus Elite which are fairly cost effective but have great VRM's...best of luck.....
Reactions: CalmlyTilted
0
C

I did a bit of research before buying the board and apparently this board only has 10 VRMs while most have 12. Rather disappointing seeing as the processor is a beast.

I appreciate your help.
0
C

NightHawkRMX:
This is the site for the manual for reference. Page 58.
https://www.asrock.com/MB/Intel/Z390 Phantom Gaming 4/index.asp#Manual
0

I did a bit of research before buying the board and apparently this board only has 10 VRMs while most have 12. Rather disappointing seeing as the processor is a beast.

No problems at all....And yes both the Gigabyte Aorus Pro and Aorus Elite have 12 phase VRM's and have been reviewed very well on the Z390 side..
0
C

NightHawkRMX said:
Try updating the bios to the latest version.
Click to expand...