I recently bought two WD Elements portable HDDs. Both are MFFZDA WDBU6Y0020BBK and both are identified by Windows and HD Tune as "WD Elements 2621 (2000 GB)".

I am a bit puzzled by the shape of the graphs (see screenshots below) and by the huge difference between the two. The first transfer rate anyway is disappointing.
I tried more times, getting same results and same graphs.

Block size is the default 64KB, in HD Tune. I also connected the USB drives to a different PC, different USB3 ports, tried different levels of test speed / accuracy, different versions of the program (HD Tune 2.55 and 5.75), and even a different USB cable, but the transfer results and the graphs did not substantially change. 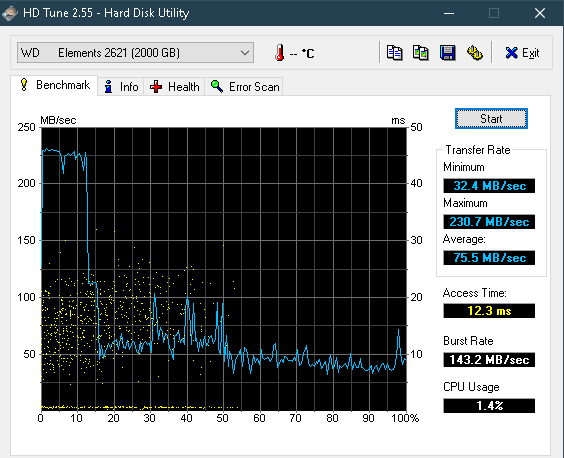 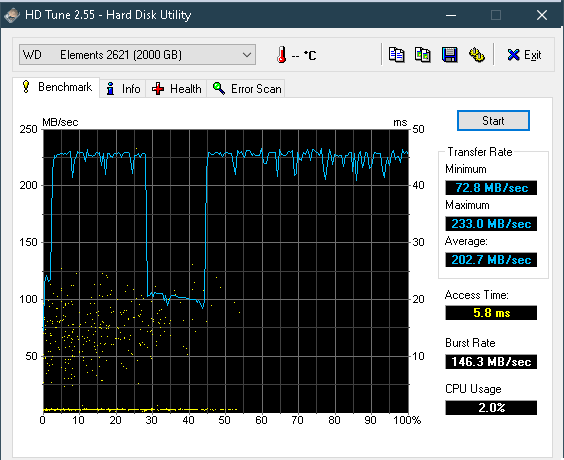 P.s.#2 I am testing the drives with HddScan too. It takes hours if not days. Both disks passed the Extended S.M.A.R.T. Test, but disk "A" took roughly double the time than disk "B". Now I am running the VR-Verify surface test and disk "A" seems to have a good deal of "slow blocks" (that is, not bad blocks, but blocks with longer processing time in ms) which disk "B" does not have, or just very few).
Last edited: Jul 26, 2021
0

Very strange.
It could be the connector/adapter used in each of the portable enclosures. It could be that one of the drives has an issue that isn't readily identifiable by software.
In either case, I would return the slow one and see if you can get another 'fast' one.
0
F

I would have thought that a sustained transfer rate of 233MB/s was far in excess of what a 2.5" drive is capable of. Moreover, the transfer rate near the spindle should be half the rate at the outermost cylinders, not a flat line.

The maximum internal transfer rate is 149MB/s. I don't know if the WD20SDRW is significantly faster, but 233 MB/s is fast even for a 3.5" drive.

Your drive an SMR model: