Here's a list I don't know how current it is.

As mentioned look at the cpu support list for your mobo.
0
M

Instead of a partially vague '2011 mainboard' description, better to post the actual manufacturer with model number and revision, and you or others can find the actual list of supported CPUs...

(Unsure what the cost of some of these formerly $1000+ CPUs is today, but, naturally one would not want to spend much more than $50-70 on one what with the B660/i512400F combos available that are more than 2x as fast)
Reactions: Karadjgne
0

Do you already have a lga2011 motherboard?
What is your budget and what do you need to buy.

The workstation processors are good for multithreaded batch apps.
But the single thread performance is not what you would want for good gaming.
0

thanks I have a x79 so this will be helpful
0

this is what i have 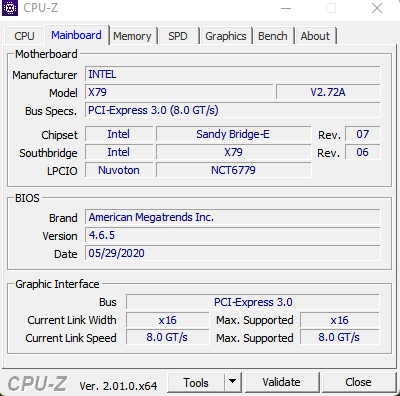 Do you only have the motherboard?
Do you also have ram, case, psu, and the rest?

The CPU-Z does not seem to identify the motherboard exactly.
Since the only manufacturer ID is Intel,
I suspect you may have an old dell or hp workstation which can be bought cheaply these days. Such vendors would have bought the motherboards in bulk directly from Intel, hence the lack of an ID.
The Xeon ES-2667 v2 can be bought on ebay for about $40.
It could work. But, games depend on good single thread performance, and the single thread passmark rating of that chip is 2017.
By comparison, a new $60 G7400 processor single thread rating is 3085.
Even with only threads, the G7400 is possibly a better gamer.
I would really suggest stronger though to match up with a very nice graphics card.
You must log in or register to reply here.
Share:
Facebook Twitter Reddit Tumblr WhatsApp Email Link