Question What is wrong with my mainboard? - Lenovo Y50-70

Hey everyone! I am currently diagnosing (or rather trying to diagnose) a fault on my Lenovo Y50-70 Laptop's mainboard (LA-B111P ZIVY2) but I really need someone more experienced to confirm my diagnosis before I attempt to fix it. Let me describe first what led up to this point:
My Laptop suddenly shut down while in use and would not turn on again. I opened it to unplug the battery , wait and plug it back in as that had fixed it before, and when that did not work, did the same with the CMOS battery and then one by one unplugged all the other boards and components that are not needed for getting a bootscreen and finally the RAM sticks. Still no boot, no fans, no powering on. But the charging LED does still light when plugged in. The only sound it made when pressing the power button was a very quiet high pitched fast beeping that becomes slower until it stops.

First question is just a sanity check: Am I correctly assuming that the mainboard is the culprit here? With all components unplugged and 20 V from the power adapter, it has to be, right? It should at least do something when I turn it on, right? 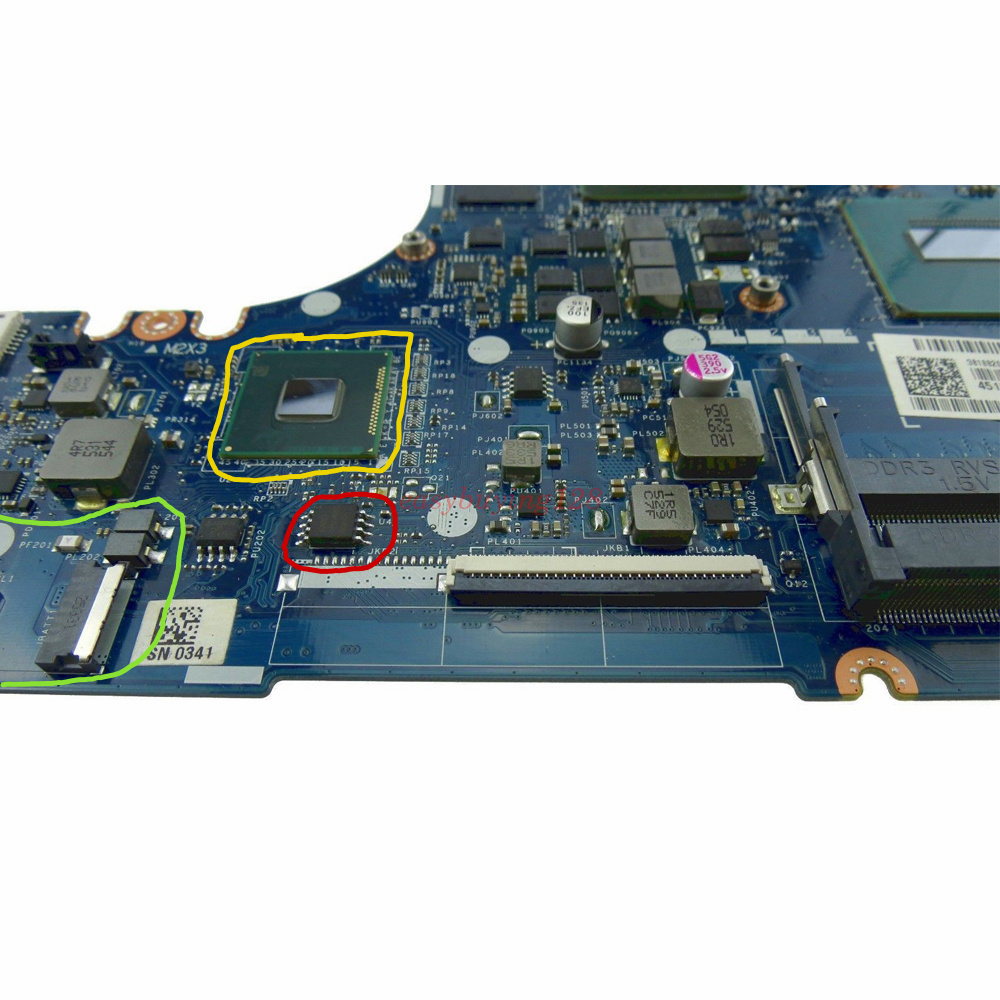 I then measured what I could on the board and found a dead short between the VCC and GND pins of the CMOS chip (MX 25L6473E, marked in red on the picture) which is near the PCH (DH82HM87 SR17D, marked in yellow) and directly on the opposite side of the board (from the CMOS) is the SIO chip (KB9022Q D). I do not know which of these chips share a common 3,3 V supply but I did check if any of them get hot and miserably burned my finger on the PCH. I did the following tests spraying IPA on the chips instead of using my finger and every time I plugged the power in, the PCH immediately got so hot that it spit liquid and steam. After a while of letting it plugged in it cools down again. None of the other chips get very hot. If I plug in the battery the area marked in green (the connector inside the green outline is from the battery) is getting quite warm but not hot.

Second question: Is it normal that the PCH is getting so hot without the Laptop even running or is it faulty? My current explanation for that is that there is probably a short in the PCH itself and some other circuit cuts power to it after a short time. Is that plausible or could it still be another chip?

And finally the third question: Would it be doable for an amateur to replace the PCH using a hot air station and other common tools?

Thanks for your time!

Of course I left out a lot of other details and findings I could not interpret in any useful way or which did not seem connected to this issue. For example, if I remember right, the board pulled 20 mA while plugged in and doing nothing. That is after the PCH stops burning up. That process is apparently too quick for my multimeter (or my eyes) to catch. That current did not seem unreasonable to me and my meter probably has an inaccuracy around 10 mA since that is the last digit is shows. I can measure it again if that value would be helpful.
Also both fuses are good and there is absolutely no visible damage or scorch marks on the board apart from a USB connector which is missing a bit of plastic on the corner of the "plastic slab" inside the connector which carries the contacts but the latter seem intact. In the past some of the USB connectors acted up regularly and lose connection when a plugged in cable is moved. The network card has also been faulty for a long time now. Either that or it was a driver issue which I could not solve. I have used an external wifi adapter which was cheaper than a new card and had better range anyway. And then, as I mentioned in the first post, the laptop had already shut down once and would not start which I solved by unplugging the battery from the board and waiting.

If there are some other diagnostics or measurements I should make, please let me know. I also found schematics for the board but I cannot make sense of most of it apart from the first few pages which give a general overview of the board.