Question Why does write speed on my SSD drop so much?

I have Samsung as well as Adata SSDs. On Adata sometimes when I copy a very large single file say 4 GB file, it starts with say 190MB/s but during copy as it proceeds speed suddenly drops to as low as 15 MB/s then fluctuates a lot but many a times it stays at 15 - 20 or sometimes goes back to 180 – 190MB/s again varies.
It feels as if it’s copying data to a pen drive rather than SSD.
I have run sstoolbox app and it reports good status as well as smart is also fine. It says firmware is latest. What causes so much drop in write speed on SSD? What I have is Su630 and to my knowledge it does not have dram.
I never faced this issue with Samsung one.
Yet when I run speed test on adata it shows > 400 MB/ Read as well as Write speeds!
So speed test appears deceptive to me.
On paper there's nothing wrong with this SSD!! So I am clueless. Any help is much appreciated. 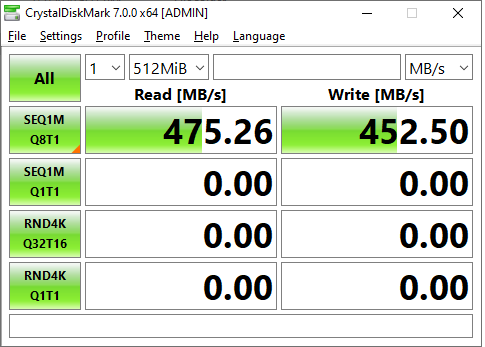 How full is the drive?
SSD performance can drop significantly, when drive doesn't have enough free space.
0
L

Likely has to do with the caching capability of that particular drive. Some caches are relatively small and fill up quickly. That can slow you down when transferring large amounts of data, but you might not notice it at all in other operations.
Reactions: Nighthawk117
0
N

As suggested by @Lafong it's probably related to caching, SSD's typically have a faster SLC cache that they write to when you first perform a write operation. The data is then transferred in the background to the slower NAND for storage, if you are writing a large amount of data that exceeds the cache size your speeds will drop significantly afterwards. A lack of free space can also hurt performance as there is less room for the wear levelling algorithms to work with.

What model drive do you have and how much free space is on it?
0
M

Free space may not much matter.

What counts is how much you ask it to copy or move in a single operation. If you ask it to do more than the cache will hold, expect temporary slowdowns.
You must log in or register to reply here.
Share:
Facebook Twitter Reddit Tumblr WhatsApp Email Link