can win 10 add itself to boot details in a win 7 install that only has 1 partition?
0
G

Colif said:
Win 10 will reactivate itself when installed. The details of that PC + a copy of the licence key are saved on Microsoft servers. When you reinstall win 10 and get to part of install asking for a key, you click "I don't have one" and win 10 will continue to install and once you reach desktop, will contact servers and check activation. And if it finds it, reactivate. You don't have to do anything.
Click to expand...

Okay, does it then require the hardware configuration (including the HDD) of the laptop to remain the same when reactivating?
And could it somehow impact my plan to install the Windows 10 Pro on the 2.5" SSD? Could the Microsoft servers maybe recognize it as the same hardware configuration and then use the Windows 10 Home license to activate the new Win 10 install? Do I then need to have the new Windows 10 Pro key ready to enter when Windows asks for one in order to avoid getting in conflict with the original Windows 10 install? And is it possible to have two Windows 10 licenses to be associated with the same hardware (only different target drive)? Many questions at once, I know, I'm just trying to think through all potential traps and how to circumvent them in advance, so that I don't get stuck halfway through the process and have to start over again...


ex_bubblehead said:
Nope. Linux installs its own boot (GRUB). It should (once in a while it misses) add already present Windows installations to the GRUB menu.
Click to expand...

I just need some kind of OS selection screen when I turn the laptop on, I'm largely indifferent as to how it looks and whether it's based on Windows or Linux. But thanks for confirming that installing Linux after Windows should work.
Last edited: Jul 6, 2022
0

Windows 10 is free, just download a copy, install it, skip the registration then add any extra drivers after completing any updates. Best to do this before resale, that way the buyer needs to purchase his own registration key and doesn't walk away with one of yours. What's on the drive now is registered to someone else, in some fashion.

Doing it that way deletes any prior info of yours when windows partitions the drive. Only then reinstall any other drives, so Win10 remains seperate.

Win7 is standalone, doesn't spread to include other drives. Win10 isn't. If you have more than a single drive present, Win10 will incorporate the extra drives into an extended C drive, even if it has a different label. If you remove a dependant drive, Windows gets bricked. So if you intend to install 3 OS on 3 seperate drives (doesn't matter if physical or logical or virtual, a partition counts as a drive) remove all other drives to install 10 by itself.
0

Karadjgne said:
If you have more than a single drive present, Win10 will incorporate the extra drives into an extended C drive, even if it has a different label.
Click to expand...

not that I have ever seen.

What it does is it might put other partitions on any empty space it finds. Sure, that extra partition could be the boot partition but it never makes the drives appear to be one big C drive.


Karadjgne said:
So if you intend to install 3 OS on 3 seperate drives (doesn't matter if physical or logical or virtual, a partition counts as a drive) remove all other drives to install 10 by itself.
Click to expand...

NO, you install 7 on 1 drive, leave it in PC
then install win 10 on another drive and it will add itself to the boot info that win 7 created.
then install linux and it will make grub and do its own thing.

if you install 10 by itself it has no idea the other ones exist. you do it all in a process to get them to see each other right.
0
G

Sorry for the lack of updates lately, I had very little time to continue working with the laptop.

Yesterday, I temporarily removed the 250 GB M.2 SSD with the broken Windows 10 in order to test whether I could boot from the Win10 USB now. After removing the SSD, I started the laptop once into the BIOS and then shut it down (I suppose, this was the suggested UEFI mode boot?). And indeed, I seem to be able to boot from the Win10 USB - I got to the language selection menu and then to the 'Install Windows 10' screen, so I think I could proceed with installing Windows 10 Pro. I stopped there for now.

Next, I tried to boot from the Windows 7 USB in order to set up the intended triple boot - unfortunately, with the same result as always (as posted in #15: https://forums.tomshardware.com/threads/windows-10-boot-error-kmode-exception-not-handled.3768755/#post-22736340 ). I made a clean new bootable USB drive in order to rule out any hardware problems with the one I had used before, but the result remains the same.

My procedure for creating the Windows 7 bootable USB: 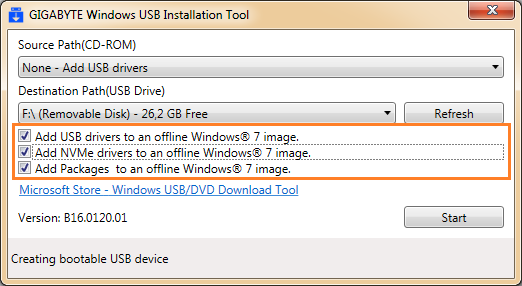 As I had previously written in this thread, I could intiate the boot process from the source Windows 7 DVD in an external DVD drive (USB connection). At some point though (when the 'starting Windows' screen with the Win7 logo appears), the connection to the DVD seems to stop, and then the laptop freezes, with no visible progress (at least not within ~30 minutes). But this is still the furthest I got with trying to boot Windows 7; USB has never worked.
I even tried once to start the Windows 7 installation (from DVD) from the running Windows 10 system, and while it would copy the files and initiates the required system restart, the result would still be the same - the 'starting Windows' screen with the logo appears, and then it's frozen for all eternity. And I've been stuck with a broken "Windows Setup" in the boot selection menu in the first position since, so whenever I was not paying attention to actively select Windows 10 instead, I would enter the broken setup again. I couldn't remove the broken entry at all - it's still on the 250 GB SSD with the non-functional Win 10.
Strangely enough, the issue with booting from a DVD also occured when I first tried to install Windows 10 from a DVD: I could boot into the menu, select the target drive to install Windows 10, even create the target partition (this is where I noticed that Windows 10 always creates 2-3 additional, smaller partitions next to the target one), but when I hit install, an error prompt would tell that the connection to the source medium is not found.


Any ideas on what might still cause this issue? What should I try, test or change next in order to proceed? Did I do the suggested UEFI mode boot correctly, or did I overlook something?
And is there maybe a clean, trusted Windows 7 Pro x64 image from a safe source that I could try instead of mine? I know that Microsoft stopped supporting Windows 7 a long time ago, but I recon there should be a mirror somewhere...
Last edited: Jul 18, 2022
You must log in or register to reply here.
Share:
Facebook Twitter Reddit Tumblr WhatsApp Email Link