Let me first say, I know software based encryption is going to cause drives to be slower. With that said, I am running an 11th gen Intel Nuc so everything is 100% supported. I was initially dual booting, and Windows 11 enabled Bit Locker. At first it seemed fine, although I did notice some drastic drops, particularly in write speeds. I decided to get rid of the other partition to boot strictly to Windows 11 with no dual booting. I was able to delete the volume, couldn't extend the drive using Disk Management so used Partition Wizard AFTER disabling Bit Locker on the C drive. After that I identified the recovery partition from the old OS by running "reagentc /info" in PowerShell for Windows 11, deleted the recovery partition for the other OS, and then extended my boot partition again. After that I re-enabled Bit Locker. I own a Sabrent 1TB Rocket Q4 NVMe PCIe 4.0 M.2 2280

I noticed an EXTREME drop in write speeds with Bit locker enabled so I've disabled it, which makes TMP useless as it's a physical hardware key used by Bit locker for encryption as hardware solutions are always more secure, but BL is still software based. I knew software based hard drive encryption slows down the drive, but I went from 3600MB/s read with BL enabled to 4700MB/s read when disabled. Read and Write speeds looked fine in Crystal Disk Mark after a reboot with BL enabled (3600MB/s read and 19000MB/s write, but after some time, my write speeds would drop to 550MB/s on my Sabrent Nvme m.2 gen4 SSD. After disabling, I get around 4600MB/s read and 2200MB/s write for both sequential tests (random read/write tests are closer, but still faster with BL disasbled). It stays that way and is noticeable after you use the OS more... The odd thing is I didn't notice this at first when I was dual booting. Only after disabling BL to delete the partition of the OS I didn't want to use anymore, extending the C drive using MiniTool Partition Wizard as Disk Management wouldn't allow this. After encrypting again and choosing "Entire Drive" instead of just data, I noticed how much slower it was so I'm not sure if it's due to encrypting the entire drive. When upgrading to 11, or in particular when doing a new install, it only encrypts the data on there, not the entire drive. MS recommends the entire drive after the OS is installed to encrypt anything that may of been deleted but I can say for certainty that it slows down my SSD. I'm willing to accept a drop, but losing 1500MB/s on sequential writes is just to big of an impact. It's noticeable also as I have a Samsung X5 external TB3 drive as my performance drive in Storage Spaces, and before that I go much faster write speeds on a Gen3 Nvme drive, which had BL disabled immediately after it was plugged in.

I may go back and re-enable it, but only for existing data to see what happens. I can deal with the loss in read speeds, even it is by 1000MB/s. It's the write speeds, it is most noticeable with large file transfers. From my Samsung X5 external SSD, it would go from 1.4 GB/s to 550MB/s after roughly 10 gigs transferred with BL enabled, Disabled, it gets to 40GB before slowing down to 800MB/s on a 50GB file (both test done with the same file and same testing scenario). Has anyone else noticed extreme drops like this? Like I said, I know it's going to be slower with BL disabled but the extreme drop in sequential write speeds is making me leave it off for now. I wish I had taken more screenshots using Crystal Disk Mark but here are Sabrent's software utility results. The top are with BL enabled, first has cache disabled, second has cache enabled. Second row is no BL. I don't trust the Sabrent tool, but it does show the differences between when disabled and enabled (not the read speed difference I see in Disk Mark). If I have to enable it again to do more test in Disk Mark then I will but I am only encrypting data already on the drive, it seems like encrypting the entire drive made it even slower then after first upgrading to Windows 11 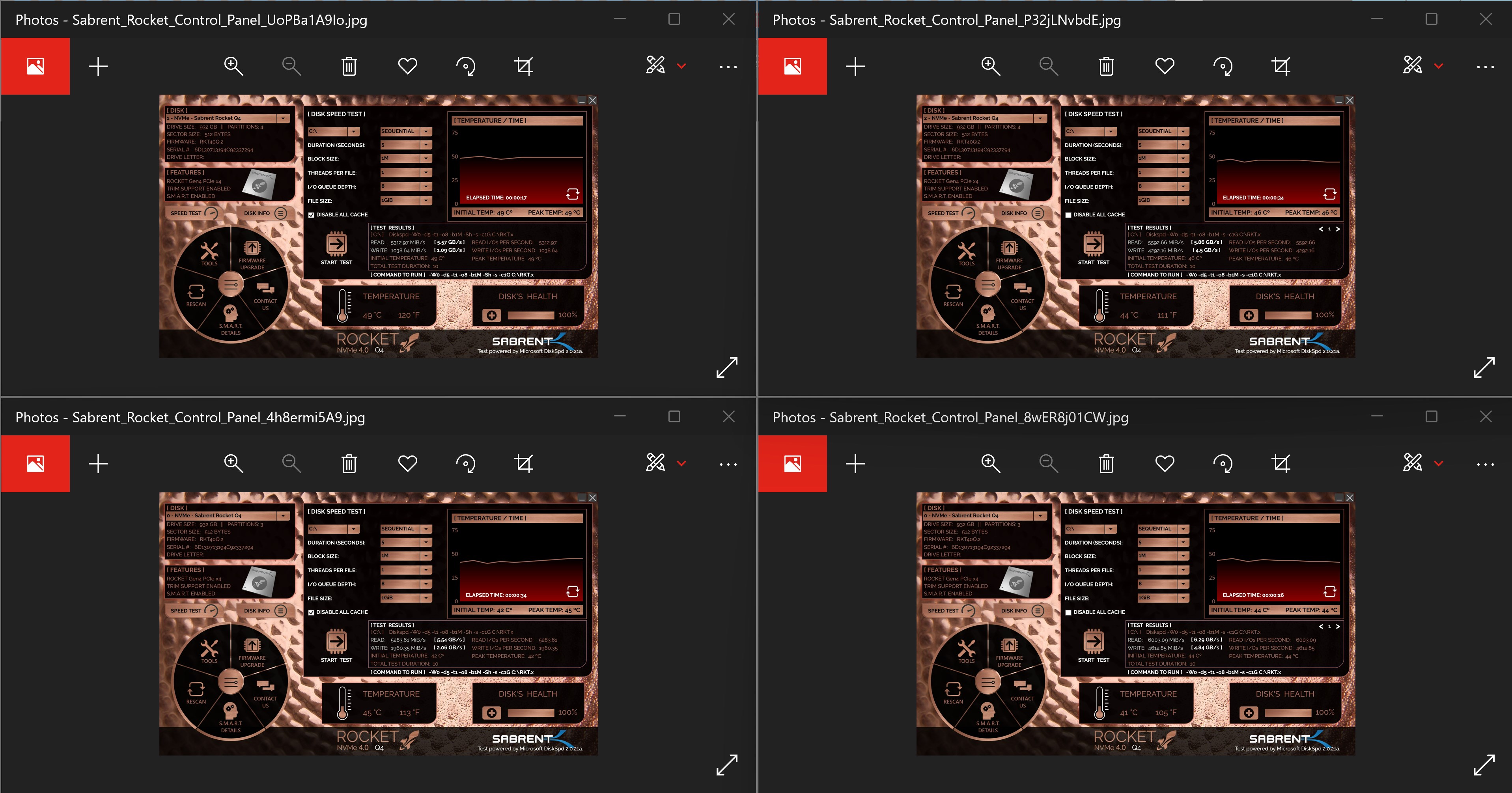 Okay, after some more testing, the read speeds are consistent. I get 3600/3800 MB/s when Bit Locker is enabled for large sequential reads. Disabled I get 4600/4800 MB/s. The writes are roughly the same and I have experienced write speeds drastically slowing down to 500/600 MB/s from 2000/2200 MB/s regardless if Bit Locker is enabled or not, so that may be a hardware issue. I need to investigate further. You can go ahead and delete this post but I would be interested to see if others get similar results with the reduced read speeds on their OS's Nvme drive.

Speaking only for myself, but I've been using BitLocker from the moment it became available for use many years ago and have never seen a slowdown when it's in use. Yes, there is a small, measurable difference, but nothing visible in normal operation. This includes using it on self encrypting drives.
0

Any idea if Bitlocker is being expanded into Home or is it still Pro only? I thought that since TPM is necessary they might have expansed Bitlocker to all of 11.

I haven't looked myself.
0

Colif said:
Any idea if Bitlocker is being expanded into Home or is it still Pro only? I thought that since TPM is necessary they might have expansed Bitlocker to all of 11.

Windows 10 Home does have 'device encryption' which is just a watered down bitlocker tied to your Microsoft account. Big differences are the amount of control you have over them and the encryption of removable disks.
My guess is that they will continue to keep them separate.
You must log in or register to reply here.
Share:
Facebook Twitter Reddit Tumblr WhatsApp Email Link