Been noticing some odd behavior from anti-malware executable lately.
About every 6 hours, MsMpEng.exe will take as much CPU as it can manage for about 20-30 seconds, overtaking all other processes as it does so.

I don't remember having enabled any kind of scheduled scans, but then again I suppose that's just standard and maybe windows 10 figured it'd enable that on it's own... But even if I had, this is a recent issue. I heard rumors that if it scans it's own folder it can cause resource hogging, so If I exclude it's home folder it might be fine? But why would that start now?

I was playing GW2 while I managed to capture this image, having the resource monitor open on my second monitor to see what was causing the CPU spikes. Any ideas what can cause it to hog the entire system? 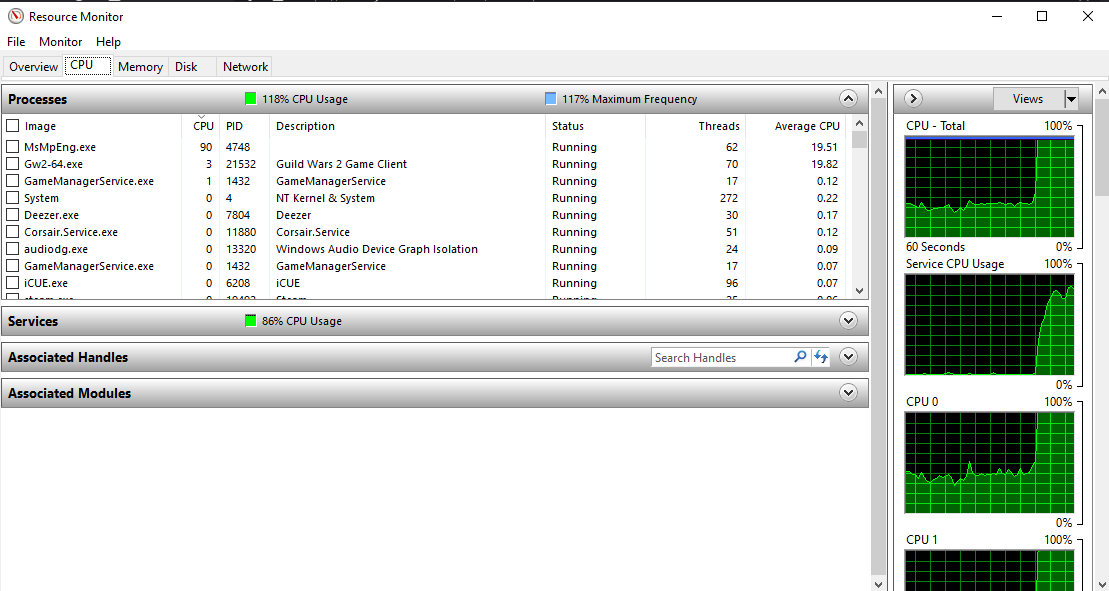 could be running an update.
What was the disk/memory usage.
0
L

rgd1101 said:
could be running an update.
What was the disk/memory usage.
Click to expand...

Looks like this, kinda spazzy too. I only managed to get the graphs though and not a screenshot of what was going on while it happened. It doesn't last very long, only about 10-20 seconds.

I tried adding Windows Defenders folder to the scan exclusions but that didnt seem to fix it. 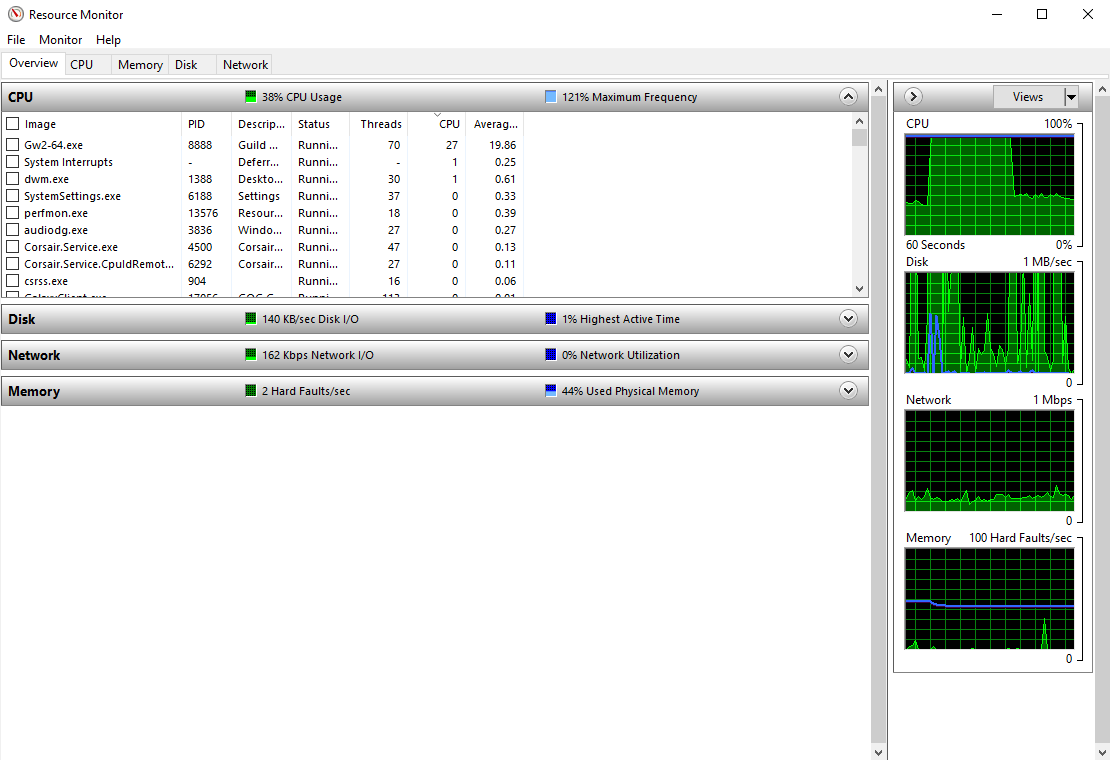 Could indeed be trying to update as posted by @rgd1101.

Remember that Task Manager is another tool you can use to help find the reason/culprit.

Also take a look in Task Scheduler for any Defender related triggers.

Try running "sfc /scannow" and "dism" - could be some file corruption involved.

Another way to observe what may be happening is to use Microsoft's Process Explorer (free from Microsoft).

Watch that on the second monitor as well.
Reactions: Hellfire13
0
L

Updated it to the latest version.
sfc /scannow found some corrupted files, they were fixed. Dism didn't really do anything.
Task Scheduler had nothing, so I added my own that ran fine without hogging the entire CPU.

And the problem still persists. Every 6 hours, just about, it will hog the entire CPU for about 20 seconds and then it will just go back to normal.

I've used various monitoring programs to see if there is ANY other processes that could be pulling some shenanigans, but nothing pops up. MsMpEng.exe is always the top-scorer.

There's no schedule shenanigans though. There's no notifications and there's no other process trying to hog anything. Windows Defender just craps itself for a while.

So I am just going to disable it entirely and find an alternative AV. I don't want to, I've found most third-party AV's to be highly intrusive to an obnoxious degree, but it's better than nothing. I'll post in a couple days to see if that helps.

I would've tried to simple limit the CPU usage allowed for, but Windows won't let me do that through task manager. Probably way more involved than a simple process.
0

anything thing running on the background?
checking email, etc? the scanner might just be scanner new stuff downloaded
0
L

Driver programs are the only real constant.
Razer Synapse
iCue
Logitech HUB
Sidenote: I don't really like any of these, but because I made some poor decisions in hardware purchases I have to use them to get the mileage advertised.
I'll also listen to music on programs like Foobar and Deezer.

I check my e-mail daily through Firefox, and log-out afterwards. I can't imagine that is the issue because this is such a recent problem that started about a day before I opened this thread.

I have a good habit of deleting downloads after they have served their purpose, so I don't imagine there's anything to really scan. Also doesn't real-time protection already do that? Then again a lot of gaming libraries like Steam and GOG automatically update their stuff as soon as they've launched so I guess I can't rule that out.
0

Try Fix #3 - Objective being to determine if you can alter the 6 hour time pattern.

I think I might have found a culprit, being Deezer. I tried to turn off everything I could aside from the driver-related stuff for the past few days (iCue, Logitech, etc) and things have actually been fine. Then I started using the Firefox browser while playing games again and still everything was fine. Then I started using Deezer again, and then it happened again after a certain time had passed.

I can't explain why that program sends MsMpEng.exe skyrocketing on the CPU charts, but what I am going to try is add Deezer to exceptions and go from there. Thank you for trying to help guys, ill try to update this when I figure out more. It's a bit hard to narrow down though because of the random time-frames.
0
L

No that was not it. At this point I am suspecting GW2 itself.
At the end of the day I dropped Windows Defender for a different AV and I haven't had a problem since.
You must log in or register to reply here.
Share:
Facebook Twitter Reddit Tumblr WhatsApp Email Link