I have a Windows 10 system which when left running for about 3 or so days will start to show odd behaviour in Windows Explorer. What happens is, Windows Explorer will randomly restart itself. Then, it will fail to load thumbnails and it will start to freeze/lock-up whenever I click on something. Has anyone had this issue before?

I've tried killing Windows Explorer from the Task Manager and killing off other programs that are open but nothing seems to restore its functionality other than a full system restart. It's a very annoying bug because it means I need to close all my work down and re-launch everything and it's especially annoying when I have several Windows Explorer folders open and they all just die.

I'm running the latest Windows updates and this issue has been happening for a while but it's got to the point where it's starting to eat into my work time and cause me a great deal of frustration. Yes, I've tried re-building the thumbnail cache which every site recommends when doing some research on the issue, but that doesn't fix it.

It's almost like a process of some sort of hooked into the Explorer task, but I don't know which program to kill that's running.


Try a clean boot and see if it changes anything - make sure to read instructions and make sure NOT to disable any microsoft services or windows won't load right - https://support.microsoft.com/en-au/help/929135/how-to-perform-a-clean-boot-in-windows

all it does is stops programs running with windows, it doesn't remove anything. Easily reversed

if clean boot fixes it, it shows its likely a startup program. You should, over a number of startups. restart the programs you stopped to isolate the one that is to blame.
0

No issues with any of those commands. My system is clean and healthy.

Sorry, but I'm not going to be executing a clean boot. I'd prefer to try and fix the issue now while the bug has triggered so I can find the root cause of it.
0

clean boot just sets up start so that its only windows programs running. it would at least tell us if its windows or maybe a driver.
it doesn't remove anything from PC. Its not a reset.

what are specs of PC? Could check health the drives in PC.
0 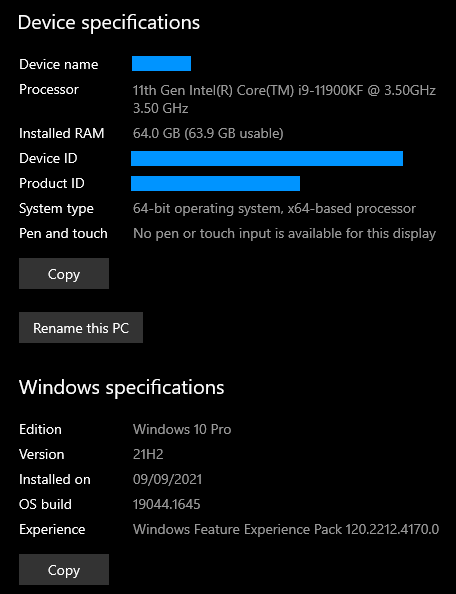 Also have an RTX-3070 and my Samsung 980 Pro is healthy (scanned it before posting this topic using Samsung's tool and using Windows' CHKDSK).
0

does the pro use the Samsung NVMe drivers? on same site as Magician is.
0

Yes, latest BIOS on the motherboard. The driver for my 980 Pro is from Microsoft and it's been using the same drive and been working fine for the past several months.
0

Okay, after spending some time using Process Explorer I found an SVCHOST process which seemed to be handling all the iconcache DB events. I killed that and then restarted Windows Explorer and everything has restored back to working order. When it happens again, I will take a screenshot of the exact process so others who stumble across this thread will know exactly what to look for.
You must log in or register to reply here.
Share:
Facebook Twitter Reddit Tumblr WhatsApp Email Link