This thread features a comprehensive list of X570/X470/X370/B550/B450/B350/A520/A320 motherboards with an AM4-socket (supporting AMD Ryzen CPUs). It is a sortable database aimed at easily comparing detailed specifications of all the different motherboard brands and models. The database can be viewed in the following link (opens to a google spreadsheet):

High traffic volume viewing the spreadsheet may render the above link inaccessible, or may disable the sorting/filtering features, or may not properly load the images/text format/pop-up notes. If so, go to this mirror link instead: MIRROR LINK
​
Note: The table is best viewed on a desktop or laptop computer using an FHD (1920x1080), UW-FHD (2560x1080), WQHD (2560x1440), or UW-QHD (3440x1440) screen resolution (sorting/filtering may be disabled and text/table format may appear irregular when viewed on a mobile phone, tablet, or Smart TV).

Each viewer can arrange or hide any data in the table to show only the models being considered through sorting/fitlering the specific features and components one is looking for in a motherboard.

All information found in the table were researched and verified to the best of my ability based on manufacturer's data, user manuals, and reviews. I may update the table from time to time when new information are made available. If there are discrepancies/errors, let me know.

HOW TO SORT & FILTER
(General instructions are included in the table; detailed instructions and examples to be provided here soon).

DEFAULT ARRANGEMENT OF THE DATABASE
When first viewed, the database is arranged in the following order of priority:
The above data can be seen in the left-most columns. Apart from the Brand/Model Name, Chipset, and Size of the motherboard, a few other data are included at the main columns: Photo of the motherboard, the Year (and Quarter) when the motherboard was made available, the Price Range, and a Subjective Tier ("ranking").

PRICE RANGE
This data shows the average approximate retail cost of the motherboard, indicated by a $ symbol. The first $ symbol means the board costs around $80 or lower, while the succeeding $ symbol thereafter is equivalent to an additional $40 each symbol over and above the $80 price tag. So,
Update: As of 15 October 2020, the data shown on the "price range" column has been revised to show MSRP (Manufacturer's Suggested Retail Price) in US Dollars (USD) upon launch. This revision is to simplify the sorting/filtering and readability of the prices when comparing motherboards.

SUBJECTIVE TIER
This is a personal and subjective assessment on how the motherboard is "ranked" based on its features, specs, and quality compared to the models of the same brand. I have generally categorized motherboards in four (4) tiers, named and color-coded as:
Important note: The "subjective tier" column only shows GENERAL categories which indicates the USAGE LEVEL of a motherboard, based on features, quality, and pricing of a particular model when compared to other models of the SAME BRAND (i.e., WITHIN the manufacturer's OWN line-up). It is NOT recommended to use "tiers" in determining which motherboard is "better", especially if compared with competitor brands/models.

Motherboards with a 4-pin, an 8-pin, a 4-pin + 8-pin, and an 8-pin + 8-pin ATX12V socket/s.​
Update: As of 28 October 2020, a VRM Phases Diagram is created on the Power Section columns of the spreadsheet. These diagrams will complement the text-based data on the quantities of MOSFETs/Power Stages, Gate Drivers, and Phase Doublers (if any) used per motherboard model, and shows how the PWM Controller's signal flows to the CPU and SoC VCC phases, respectively.

great work man.
I wonder if you could add a little piece of info on the power phases: what arrangements they I using.
by that I mean that for example some 3+3 means using doublers, while others just use double amount of components per phase without doublers which is basically useless for power delivery quality. the only real life benefit is slightly lower VRM temps.

oooh, now when you explained it, it's very clear. guess worth to put a note about how to read the VRM arrangement

I was just wondering, is the information supposed to be in a table? It is slightly hard to read right now.

luigipro101 :
I was just wondering, is the information supposed to be in a table? It is slightly hard to read right now.

Yes, these are all tables. Not sure how they appear in your browser but it should look like this: 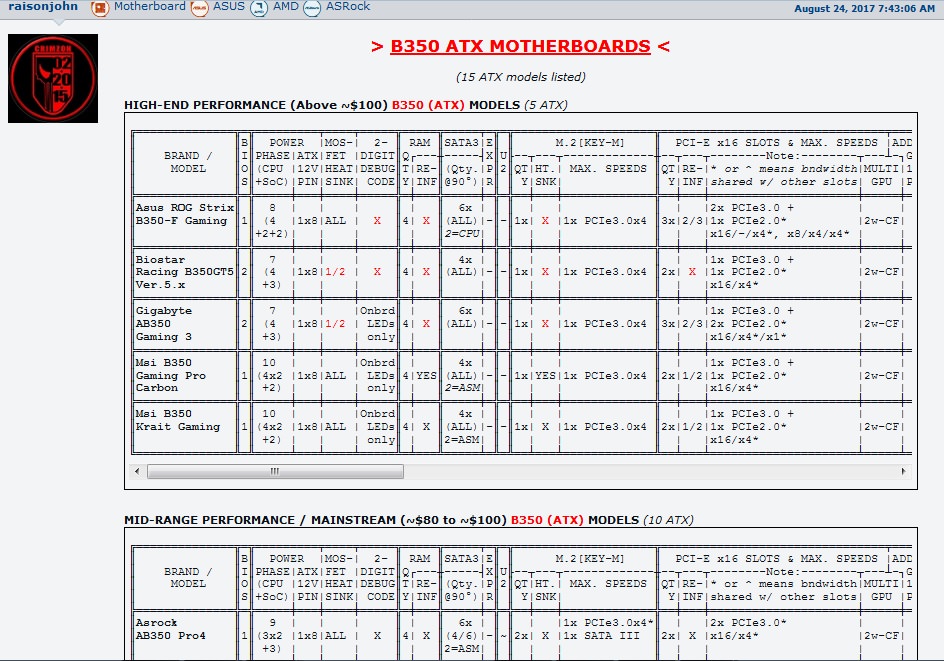 Fantastic spreadsheet. Would you consider adding the Warranty information? E.G. number of years. I think it would be very good information and not take up much room. Only be a single number 1-5

Thanks. Note that almost all of the motherboard models listed in the table have 3-year warranty (with the exception of an Asus TUF board that has 5). I have updated the table and included a warranty column. Thanks again for the suggestion!

Awesome. I didn't realize there was so little deviation on warranty length.

Latest X570-chipset mobos have been added!

Some data/photos will be provided once information is available.
G

Awesome work here @raisonjohn! Thank you for all the work you put in here. I only registered into this Tomshardware to congratulate you. This post of yours has been an enormous help on my mobo research for my new build. Just wonder why you make some usb 3.1 type c "equivalent" between gen 1 and gen 2 since gen 2 is double gen's 1 speed. All the best!

gdanielz said:
Awesome work here @raisonjohn! Thank you for all the work you put in here. I only registered into this Tomshardware to congratulate you. This post of yours has been an enormous help on my mobo research for my new build. Just wonder why you make some usb 3.1 type c "equivalent" between gen 1 and gen 2 since gen 2 is double gen's 1 speed. All the best!
Click to expand...

Thanks for dropping a message here, I really appreciate it! Let me formally welcome you to Tom's Hardware!

To clarify my notes in the USB ports/headers columns, which can be read in the table as follows:

It might be a bit confusing due to how USB renamed their versions. When 3.0 was replaced by 3.1 in 2013 and then by 3.2 in 2017, the older versions they replaced were "renamed" to the same nomenclature of the current version, i.e., 3.1 or 3.2, but with the added suffix "Genx." So, the confusing updates went like this:

Hope this clear things up. Thanks again and hope you'll stick around in the forum threads!

Based on the licensing, I understand that commercial use of this comparison table is prohibited. I am, however, currently working on building a SQL-based product/benchmark relational database for my tech review website TechAndTiny.com and much of your design could be useful and extremely time-saving. I have already scoured the web visiting sites like NotebookCheck, PCPartPicker and TechPowerUp in searching for the best designs for building a thorough and well-organized tech product database and your format here is extremely well-thought and prolific. In particular, for the motherboard table design that I am developing in my database, these column categories would be most excellent. Let me know your thoughts either here or via PM. Thanks!
L

Could you enable copying of the sheet please? I'd like to chop it up to decide my next board. It's quite ironic to put a CC license on it and then block all sharing 😁
Reactions: alkaAdeluxx and quizzicus
Q

Amazing spreadsheet. I've been using it all week to strategize my Zen 2 upgrade. But as of today, it keeps redirecting me to htmlview. Is anyone else having this issue?

Also, are you sure that the X570 Aorus Xtreme/Master have Thunderbolt headers? I can't find any mention of them on the website or in the manual.
Last edited: Jul 7, 2019

Wonderful work @raisonjohn
Do you or any other dweller of this thread know what's the distance between the mounting holes of the chipset and if it's standardized?
9

I noticed one mistake in the sheet. Seems like Asrock x570 Steel Legend does not have USB3.1 Header (20-pin) connector. Sheet has it marked as 1x.

@raisonjohn first a big thanks for sharing this with us


Larwood said:
Could you enable copying of the sheet please? I'd like to chop it up to decide my next board. It's quite ironic to put a CC license on it and then block all sharing 😁
Click to expand...

I have to agree with him.

For example, i use the the list to found the best price / performance board from the point of view of the vrms.
now i sort it by price range, here are already the first mistakes
The ASUS Pro WS X570-Ace is cheaper than both Strix and the C8H,
The ASUS ROG Strix X570-E is cheaper too than the C8H,
when there are numbers insteed the $$$$ icons, make it a lot easier to read.
(or I can copy the list and enter the numbers myself ) 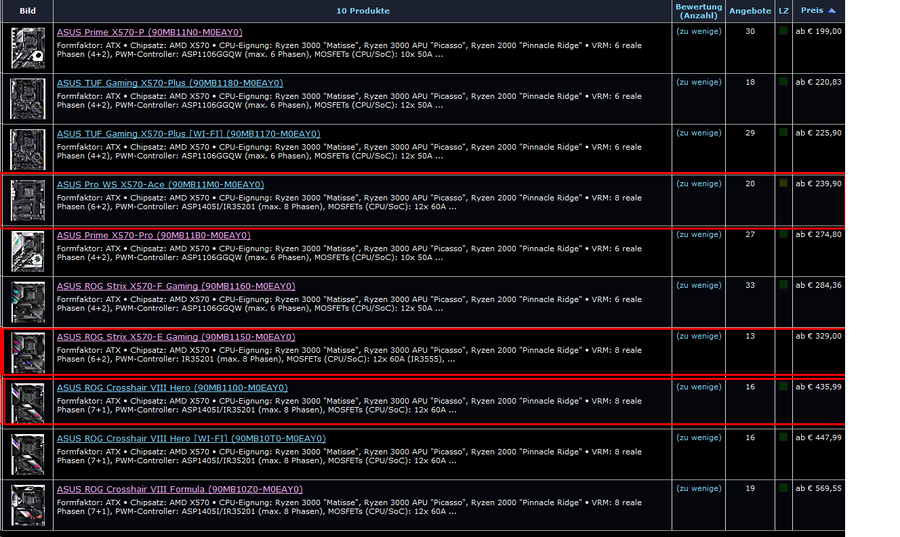 @raisonjohn is there any problem with the spreadsheet? I cannot click / sort the columns. I keep getting htlm view even after being redirected to the correct link (/edit yellow top link).
X

I was searching on the gsheet if there was an other X570 motherboard without a pch-fan like the Gigabyte X570 Aorus Xtreme.
Last edited: Jul 15, 2019
S

Hello,
in terms of memory topology seems to be an error in the table:
Can you please check the "ASUS ROG Strix X470-F Gaming"? It should be a Daisy Chain motherboard...