No bubbles to be heard from the pump, pump runs at around 2.400rpm with performance mode on. Already tried reseating the cpu pump, applying new thermal paste (AS5), tried moving the radiator a bit more low or higher (I need to have it front mounted, with the tubes on top). The cpu pump is well below the tubes of the radiator, so should be good (I know it's better to have the tubes at bottom, but not possible in my case/gpu combo).

Also tried running temp benchmarks with case open/closed, no difference. Liquid temps usually stay around 40°C max (or a little bit over under heavy stress). So a bit at a loss here, idle temps seem a bit too high, but especially stress tests seem very high, this is after all an X62 AIO, not some cheap air cooler. The X62 is about 3yrs old now, give or take a few months. It all 'seems' to run fine, but I have a feeling cooling performance isn't quite ok.

Or maybe my case just is very bad for airflow, but it got very good reviews so that's why I bought it together with the mainboard/cpu etc. Never noticed these high temps, but only recently started checking them. PC is pretty stable though, but no overclock. I though using an AIO like the X62 would indeed allow me to get a pretty good oc, but with these temps I don't even consider trying it.

1)Pump speed is maxed out?
It likely is, from what you've provided so far, but I want to be sure.

2)Liquid is flowing normally?
While the PC is running, feel the cpu block, both tubes, and the radiator. All should feel fairly warm, save for the return to pump tube.

3)Remove the bottom intake and move it top exhaust next to the other fan. There's just too many restrictions at the the bottom for it to be effective.

4)If you run the system with the door closed, then why do you have the fans in front of the rad?
They should be used as pull fans, not push.
Hybrid coolers are just as dependent on good airflow, perhaps even more so than air coolers are. The closer the fans are to a solid surface, the harder they're going to have to work to get air through that radiator.
If they're being choked, then the liquid flow is basically working alone, and that only works for so long...

5)Are you using Dragon Center? Remove it.
If you still need Mystic Light to control RGBs, it can be installed without DC.

6)https://en.wikichip.org/wiki/intel/core_i7/i7-9700k#Frequencies
This is the 9700K's stock operation according to Intel's guidelines. When you run a stress test, are you seeing these numbers? This is assuming Dragon Center needed to be removed.
0
L

edit :
So I changed some things around, put the original NZXT fans behind the radiator, so case>rad>fans, and moved my bottom noctua to the rear, replacing the stock Fractal fan that came with the case (so it's PWM now too). No exhaus (yet) on the top.

Sadly...no change... Idle temps are pretty much the same (even with case fully open), cpu temps jump around a bit from 38°C > 50°C and back when there's some background activity (I suppose because one core is getting more to do, and then it settles back).
Last edited: Sep 9, 2020
0
L 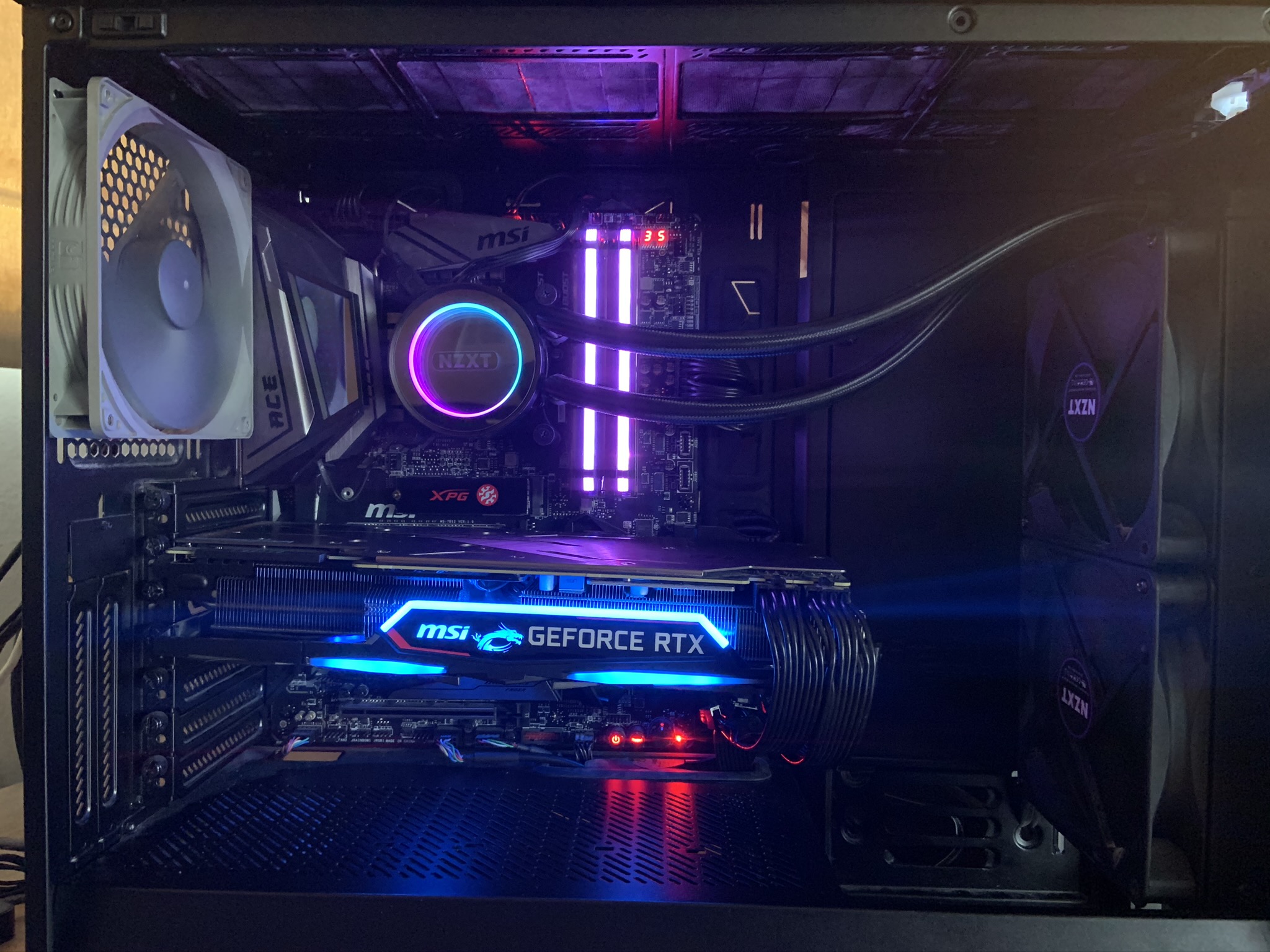 Video of the temp fluctuating : (just by moving some windows around)

Can you mount the radiator to the top of the case, rather than the front?

There's always air inside an AIO and with the tubes 'up' like you have the radiator mounted, air can collect at the inlet/outlet tank and you might not get very good flow. The pump is lower than the inlet I/O, so that helps the pump from being airlocked, but if there is an air bubble preventing cooling being returned to the pump, it would still be an issue.

Even if you cannot mount to the top of the case, remove the radiator and hold it horizontally and higher than the pump during operation. This can tell you if the mount location you are using now (front) is causing your issue.
0
L

lapinobel said:
The tubes do feel a bit (luke)warm, as does the top of the radiator. Both tubes feel different though, one is clearly hotter than the other
Click to expand...

This would indicate clogged cpu block or failing pump. Both tubes should be same temperature.
0
L

Anything I can do about this? There seems to be no strange noises.
0

lapinobel said:
Anything I can do about this? There seems to be no strange noises.
Click to expand...

Either open up/clean it or get a new one.
AIOs are not really meant to be user serviceable.
0
L

Just re-checked, both tubes actually feel pretty cool, even the top of the radiator isn't exactly "hot". Liquid temp shows around 36°C. But the idle temp never drops below 40°C (with door open), and usually over somewhere between 45°C-55°C. It's really not static, at all. Checked performance monitor, got almost no cpu load.

Hm, guess I'll need a new one then. Should I get the X53 and mount it on top, or the X63 and mount it in front, keeping in mind that my case isn't the great for airflow. Noise is a big factor for me, but of course cooling needs to be decent too.
Last edited: Sep 9, 2020
0

lapinobel said:
so I should put the fans behind the rad (so case > rad > fans as intake) ?
Click to expand...

Also, about the tubes: one should be warmer than the other. You know, the heat being carried away from the cpu block to the radiator, the rad being cooled by the fans, the cooled down liquid returning back to the cpu block.
I don't know why someone said they should be the same temp, because they shouldn't; that would mean the fans aren't cooling down the liquid fast enough as it passes through the radiator.


lapinobel said:
nope, dragon center is installed but I'm not using it
Click to expand...

You should still remove it. As I understand it, that blasted app applies custom cpu profiles against your permission.
That's why I posted that link to the 9700K's stock operating frequencies.
Again, if you need Mystic Light, remove Dragon Center and install ML separately.
0
L

Yep, done that. Still, no difference in temps. When I do nothing, idle is now around 41°C (with front door open). But from time to time jumps to 55°C+ and then gets back down. Liquid temp is 35°C. Not sure why it fluctuates this much. Still, any bencharm which puts large stress on the cpu, gets me into the upper 90's...

Just ran furmark cpu burner for a few mins... temps immediately shoot to 100°C, top tube feels pretty warm, bottom tube feels very cool. Almost seems that the coolant is indeed cooled through the radiator (one tube warm, one pretty cool) but the cpu block doesn't seem to cool the cpu all that much. It's definitely mounted correctly, already re-did it three times, each time applying a pea of AS5 paste after cleaning the cpu/block clean.
0

Done what? The fan placement?
Or did you mean remove Dragon Center?
0
L

Removed Dragon Center and still no change, eh?
You've also moved the radiator fans to pull and still nothing.
The liquid temp isn't running amok, so there isn't a problem with the cpu block mount, or the liquid flow rate.

What's still consistent is that temps go to heck under a cpu stress test and specific games.
Ok, 2 more suggestions:
1)Please do as Rubix_1011 suggested: "remove the radiator and hold it horizontally and higher than the pump during operation. This can tell you if the mount location you are using now (front) is causing your issue."

2)Check the cpu's frequencies while idle on the desktop, in Doom, and BF V. If the cpu is truly running at stock operation, there should be dynamic changes in frequency, save for perhaps BF V, which appears to be hitting the cpu the hardest.
There is still one other variable I can think of that may be at fault: the motherboard. The manufacturer could've tweaked the bios for this board out of the box to squeeze some extra performance from the cpu.
You get screwed over, because those tweaks make it run hotter than it should be.
0

Phaaze88 said:
I don't know why someone said they should be the same temp, because they shouldn't; that would mean the fans aren't cooling down the liquid fast enough as it passes through the radiator.
Click to expand...

The difference is VERY significant. When running the cpu under stress, one tube is pretty hot, the other almost cool to touch. I can order a new one, and see if that is a big difference. If not, I can send it back. Question though, should I go for one that can be top mounted, or should I go with a 280mm again?
0

lapinobel said:
The difference is VERY significant.
Click to expand...

But you didn't post the liquid temp when the cpu was running crazy hot.
Ambient temp : +- 24°C
Liquid temp after boot : +- 35°C
That's what you posted, then you proceeded with the cpu core temperatures. 35C liquid temp is good.

Does the liquid temp also go bananas when the cpu is pushing those high thermals?
0
L

Nope, liquid gets up to around 43 max. Anyway, ordered an x63. Turns out this x62 is still in warranty, so will send that back, possibly get replaced and I can send back the x63 if the x62 is repaired (I suppose they will replace it instead of repairing)
0

rubix_1011 said:
Can you mount the radiator to the top of the case, rather than the front?

There's always air inside an AIO and with the tubes 'up' like you have the radiator mounted, air can collect at the inlet/outlet tank and you might not get very good flow. The pump is lower than the inlet I/O, so that helps the pump from being airlocked, but if there is an air bubble preventing cooling being returned to the pump, it would still be an issue.

Even if you cannot mount to the top of the case, remove the radiator and hold it horizontally and higher than the pump during operation. This can tell you if the mount location you are using now (front) is causing your issue.
Click to expand...

Has this been attempted, it not the ability to mount to the top, but just moving into a similar position?

Your issue doesn't necessarily mean the AIO is broken, but we cannot confirm until you rule out the possibility that the pump isn't battling an air pocket, first.

Simply buying a new AIO and mounting it in the same position might result in the same exact issue.
Reactions: Phaaze88
0
M

If one tube is very warm, the other cool, the pump....is not pumping...

The fluid is stagnant fixed pool, gradually increasing in temp....

Break out the credit card, and get the Noctua one should have gotten the first time.

Noctua one?? Ordered an x63, will keep you posted
0

No, don't break out the credit card until my test can be ran/confirmed.

We haven't been able to determine anything without removing all doubt this is an airlock in the radiator I/O tanks.