10 Inexpensive Automotive USB Adapters Tested -- Are They Any Good?

When you see those USB adapters everywhere for only a few dollars, the convenience factor makes it difficult to resist buying a few. But are they any good?

10 Inexpensive Automotive USB Adapters Tested -- Are They Any Good? : Read more
A

I really enjoyed this piece. Thank you.

Tho have the knoledge to test all of that myself i never bothered as my intuition always pointed that generic are beter next to nothing only. Genuine branded is what i always used for the all explained and revealed in your article; like samsung charger, htc charger and so on... and i always used 12 spliters... with the incovenience of the space...
T

No Anker in the review is a bummer, still, thanks for doing this!

very interesting read. never thought it through this much but always assumed the $1 adapters were junk and generally bought name brand adapters for around $10 or so.

but now i wonder and almost feel like taking one apart just to see what's inside.

tom10167 :
No Anker in the review is a bummer, still, thanks for doing this!
Math Geek :
but now i wonder and almost feel like taking one apart just to see what's inside.

At least one of Anker's Amazon listings has a 3D render showing the internals. At a glance, it seems quite similar to the LDNIO. 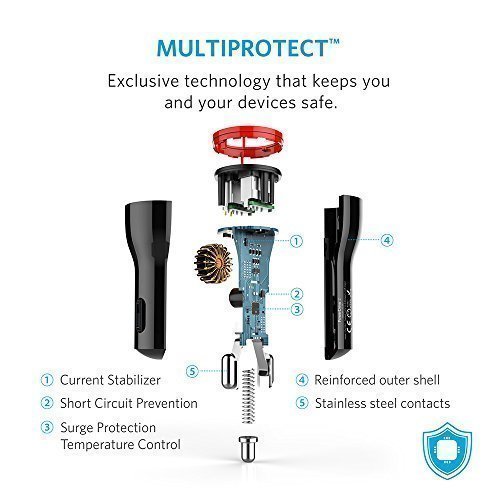 If I do another one of these roundups, I'll try to get my hands on one.

i have a couple of the belkin and griffin brands in my cars. they are common adapters found at walmart for $10-15 depending on the model. seems like a decent trade off form the super cheap ones and the super expensive ones.

but now you got the topic started, i wonder if they are worth the price and better than the junk ones i avoided.

Well, throw adapter models/brands at me and I'll look around to see which ones I can grab for a reasonable price for Round 2.

my next trip to walmart/target i'll make some notes. they carry roughly the same type stuff as best buy as far as brands go. will look for the midrange models i'd likely buy and post some for you

All of these have really high ripple. The ATX spec alone (and I know these don't have to follow that) defines 50mv max for the 5VSB rail. These all chill above 100mv.
C

Love these kinds of tear downs. I would really like to see how these adapters compare to the built in USB chargers that have been appearing on vehicles in the past decade.
D

I've bought several for $1 at Dollar Tree. No problems. Work great. And all of those "if's" are more chicken little shit then anything else. They were quite funny. Next you'll be telling us to worry about solar showers effecting the outlets.

turkey3_scratch :
All of these have really high ripple. The ATX spec alone (and I know these don't have to follow that) defines 50mv max for the 5VSB rail. These all chill above 100mv.
Most of them aren't above 50mV. The 100mV peak present three divisions to the right of the center in all waveforms is the common-mode noise from my test rig (different ground reference voltage between the adapter and the oscilloscope's input amplifiers) which I said needed to be subtracted from the output. That's what the baseline waveform was for: identify noise caused by the test rig so it can be ignored in future measurements.

Not ideal but the main concern there was verifying that the adapters would maintain stable operation through the low-going and high-going input transients. As far as I can tell, all adapters passed that part of my test: their noise profile followed the reference waveform with no obvious anomaly to indicate a malfunction or unstable behavior.

dmitche3 :
I've bought several for $1 at Dollar Tree. No problems. Work great. And all of those "if's" are more chicken little shit then anything else. They were quite funny. Next you'll be telling us to worry about solar showers effecting the outlets.
Plenty of people have also used $1 AC adapters. Most people have survived doing so but a few have been severely burnt or electrocuted to death by poorly made generic adapters. Just because you haven't personally been victim to a specific failure mode does not mean that it does not exist.

Load dumps in automotive systems are a real concern. Many people have had to have their engine management computer or other expensive electronics because of them.

Interesting piece. I've suspected my adapter had some issues for a while. It can charge an iPad and MS Band just fine, but my phone gets very hot when using it.
W

Hello,
Thank you for this test and yes I want to buy one of this thing for 10$. What do you think about this http://m.gearbest.com/iphone-cables-adapters/pp_269157.html

If you want to test, I can try to have one piece for you

Xiaomi made great product but don't know about this don't found any review.

Than you for the time past for us

I'd say for round 2 look at the top few on Amazon. Amazon basics, Maxboost, Anker, Aukey, etc
N

How about a follow up on factory installed USB ports?

Update:
Don't overestimate the importance of the input rectifier rating. It only has to meet the minimum requirements of the circuit. A 5A diode on a 1A max circuit isn't a problem. It was probably a financial decision only and possibly a substitute made during assembly. If they had a surplus reel of 5A Schottky diodes in stock then that's what they used.

Very interesting. I've been using an inexpensive 2-outlet Rosewill in my car, but I think I will replace it with something at least "likely" to be a little better. I've got some bullet ones that came with things, but haven't used them; now I won't.

I'm curious about this $99 adapter:

I've just ordered this one: http://www.newegg.com/Product/Product.aspx?Item=0S8-00TY-00018
I'm hoping the compatibility it claims implies more robust protections as well, but I suspect it will be just "ok."
I've had good results with Orico products in the past, and some of their car USB adapters carry an 18-month warranty, but they have no pilot LED, which I think I'd like to have. If you test one of these and see that the warranty is explained by superior parts all around, I'll get one of those too, and maybe use one of those illuminated cables with it.

NinjaNerd56 :
How about a follow up on factory installed USB ports?

That's what I have and use....
That would be interesting discussions with the dealerships or people I try to get to volunteer their vehicles from: "May I test your car's built-in USB ports please? I will only be running them at their maximum sustainable load for several minutes, test their maximum overload current, their short-circuit current, overheat protection, etc. Yes, any of these tests may potentially kill the ports."

jhansonxi :
The LDNIO resistor is using EIA96 code marking:
http://www.radio-electronics.com/info/data/resistor/smd_resistor/smt-resistor-markings-systems.php
E96 uses lower-case 'b' for the multiplier? With a 2.43k resistor, the current limit would have indeed been 5.1A, not the 17A (still wiring-limited) I measured. Something still isn't right in that circuit.

For the diodes, I didn't say that there was anything wrong with using one with excessive current rating. Going moderately overkill is actually good since higher current diodes have lower internal resistance. Too much overkill though and you pay the toll in increased junction capacitance and other parasitics.

Onus :
I've got some bullet ones that came with things, but haven't used them; now I won't.
That's probably a wise decision.

I'm curious about this $99 adapter:

http://www.apple.com/shop/product/HJDQ2ZM/A/belkin-dual-car-power-valet-charger?fnode=85
Apple proves once again that sky is the limit for Apple device accessories' pricing by taking most of the competition's prices and raising them by more than 100%.

One problem with those fancy adapters (including QuickCharge 3 and USB-PD) is that I'll need a chip to fake the handshake and unlock the high current/voltage limits for testing.

Onus :
I've just ordered this one: http://www.newegg.com/Product/Product.aspx?Item=0S8-00TY-00018
I'm hoping the compatibility it claims implies more robust protections as well, but I suspect it will be just "ok."
That looks like practically the same body as the unit with the blue anodized aluminum trim. If it follows the pattern of the multi-ports units I had here, all three ports are wired directly across the 5V bus and the only difference between ports are the D+/D- resistors (replaced by "Smart Sense" chips in the adapter you picked) telling the device how much current it should be able to draw.. Just like the LDNIO, I suspect you'll be able to pull the maximum total current the adapter is capable of through a single port.

With things like USB-PD and QuickCharge, a multi-outlet charger will actually need one independent voltage regulator for each variable ouptut. I'd be curious to see generic adapter manufacturers cheat their way out of that. (If they happen to be reading this: please don't take it as a challenge. And no, this isn't an attempt at reverse-psychology. Really.)