Question Can skipped A1 & B1 RAM slots cause BSOD errors?

Hi everyone. I have built a new PC recently, but since then I have got a lot of random BSOD errors. Most of the errors mention the VBoxNetLwf driver: The driver detected an internal driver error on \Device\VBoxNetLwf, but some of the error messages mention some BugCheck The bugcheck was: 0x0000001a
When I was building the PC the CPU fan was blocking access to the A1 RAM slot, so I installed two RAM sticks to the A2 and B2 slots. May this be the cause of the random BSOD errors?
This's the error events file, this zip archive contains two dmp files from C;\Windows\minidump and this is the System Info file 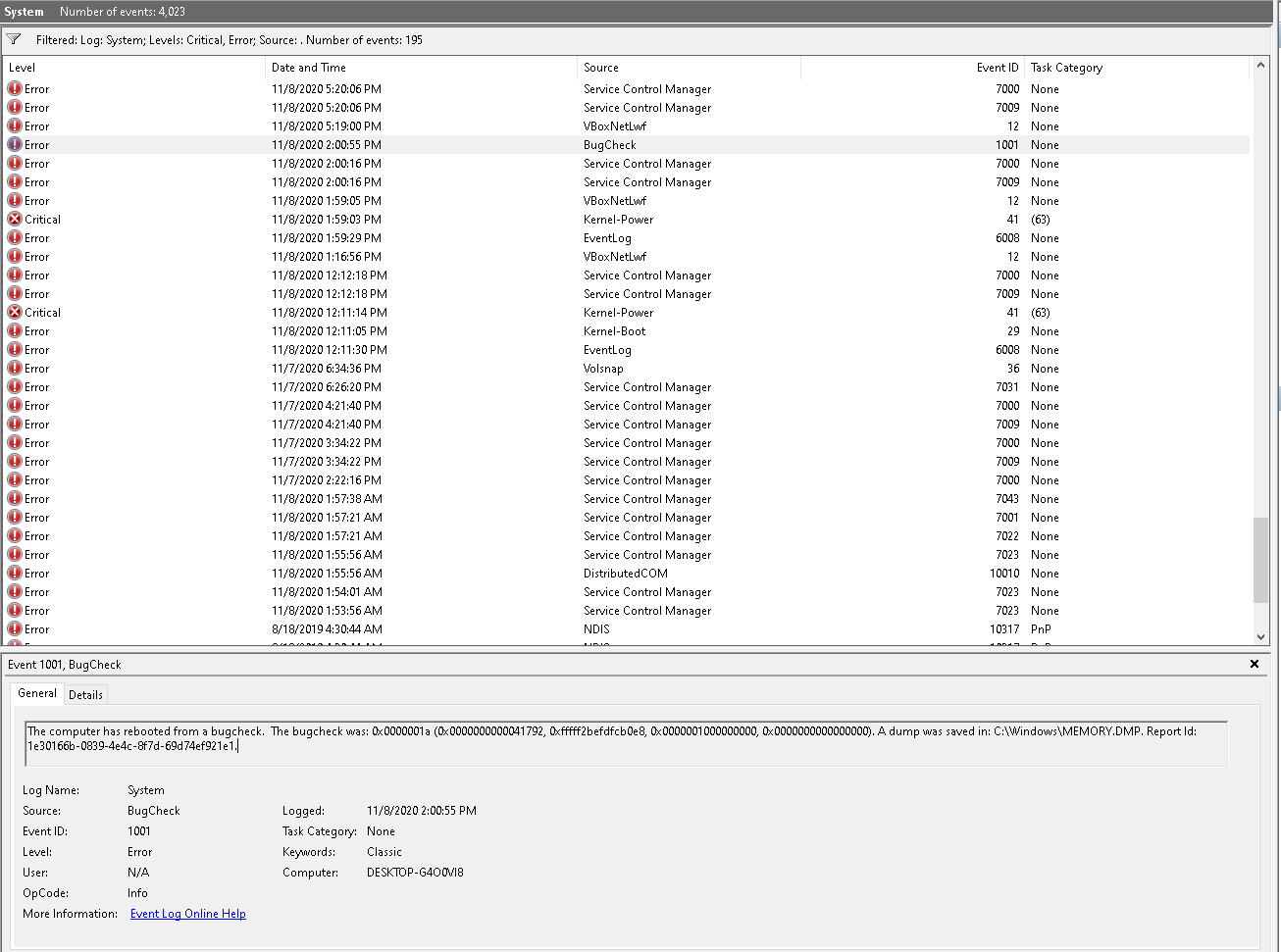 Your motherboard manual will tell you where two ram sticks should be installed.
There should be one stick per channel.
I so not know in your case if a2/b2 represents different channels.

Depending on the motherboard, the other two slots may be ok.

I suspect ram is not your issue.

Run memtest86.
It boots from a usb stick and does not use windows.
You can download the free edition here:
https://www.memtest86.com/download.htm

If you can run a full pass with NO errors, your ram should be ok.
0

Thank you for the reply. Here's is the manual for my motherboard. It doesn't say anything whether the RAM sticks should be installed into the A1 and B1 slots or A1 and A2, but from the motherboard layout diagram as I understand it I installed the RAM sticks in the correct set of slots. Here's the except about the RAM: 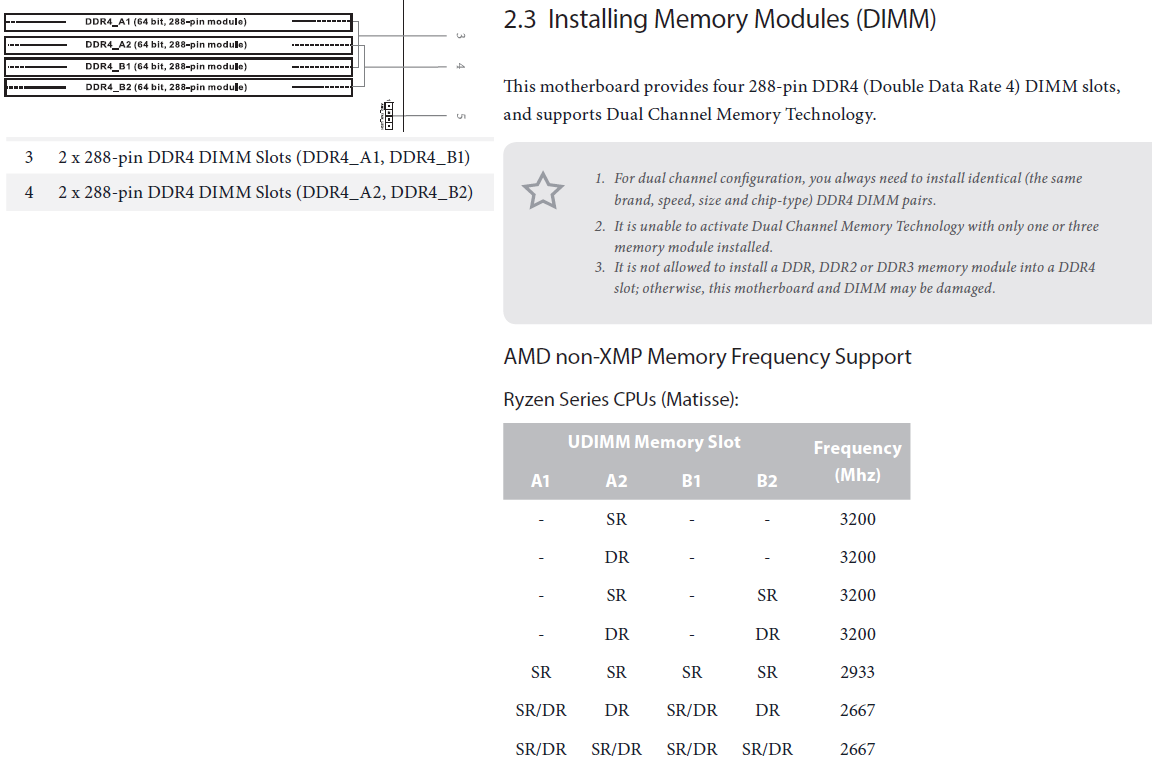 Part list:
Today I scanned my HDD disk and not a single bad sector was found.
Tomorrow I will start the memory test to run while I'm at work. If it's not because of the RAM sticks, then I'm really running out of guesses. If ram is not the problem then what else can it be?
0

Looks to me like you should be using A2/B2 regardless.
I doubt that the ram is the issue.

Is there a setting in the bios that is needed to run virtualbox?
0

The only setting I'm aware of is the SVM mode that I have enabled in the BIOS. The problem is still persist even after I uninstalled Virtual Machine though. It happens very randomly someday it crashes few times in a row another day it may crash only once and sometimes it doesn't crash throughout a whole day of using my PC. I'm really confused.
0

Update: I've run the memtest86 for 9 hours and no errors were found. The system still crashes.
0

blablaalb said:
Update: I've run the memtest86 for 9 hours and no errors were found. The system still crashes.
Click to expand...

The answer to your original question is that ram is not the cause.

I think the answer will be found in the virtual box app or a patch.
Read this thread:

Hi, can somebody help me please? Does Ryzen 5 1600 support hardware virtualization? I thought it was when I read its spec sheet. I am using MSI B350M Mortar and enabled SVM on BIOS. When I go to Task Manager it says Virtualization is enabled. When I check CPU-Z, it doesnt state there AMD-V or any...

I read the whole discussion and the issue I'm having is really different from what the OP on the other forum has. I don't think the crashes are related to the virtual machine because I was able to run emulators and virtual machines with no issue. The system crashes very randomly even after I deleted the VirtualBox. It may crash while I'm surfing the web or when the PC is on idle. I checked the file system with /sfc scannow and it detected some corrupted files and repaired them. It's strange because I reinstalled the Windows several times because of the constant system crashes. This's almost a fresh windows installation. I installed the Windows from DVD disk. I'm planning to buy a flesh drive in few days and try to install Windows from it, maybe it help...
1

Download and install windows directly from microsoft.
Any other source may contain malware and will not be current.

Update: Yesterday I installed and used Ubuntu throughout the whole day without any issue. Today I installed Windows 10 from a flash drive with GPT partition table and the Windows crashed after few hours of using the PC. I have no idea what makes it crash
0

So I was looking for an answer on the web and found a list of supported CPUs by the motherboard. I noticed that the AMD 5 1600(YD1600BBM6IAF) is supported starting from the BIOS version P2.0.

As I understood, based on this source, the only difference between the YD1600BBM6IAF and YD1600BBAFBOX part numbers is that the YD1600BBAFBOX is a boxed microprocessor with fan and heatsink, but it basically identical to the YD1600BBM6IAF .
So, my question is: maybe the crashes my system experiences from the first day I built it are because of the outdated BIOS version?I have never updated BIOS before and don't know if I should try to do it. I'm afraid I can damage the motherboard. I would like to hear some advice from experienced people, can the BIOS version be related to the crashes? Is it worth to try to update the BIOS? How risky is this?
0

I updated the BIOS, but the system still crashes
0

I have run the memtest86 for 9 hours and it didn't found any errors, but the Windows still crashes with MEMORY_MANAGEMENT (1a) error

No, that's not the difference.
The model number differs by a letter and there's a fundamental difference between the 2 chips.

That is also the reason why the 1600AF needs a BIOS update to work with the board... if you had an earlier version of the BIOS (like the P1.60 you mentioned) with it you wouldn't even be able to POST, let alone getting into Windows with the AF.

Just wanted to clear that up for you. As far as the minidumps go, maybe some guys with more experience on these might chime in.

EDIT: Have you tried the memory modules individually (each one of them separately) ?
Last edited: Nov 26, 2020
0

Thanks for clarification the @ChumP .

ChumP said:
The model ending in AE (which is the one you have) is the the first gen Ryzen 5 1600 based on the 14nm Zen architecture
Click to expand...

The CPU-Z says that my CPU uses 12nm Technology. 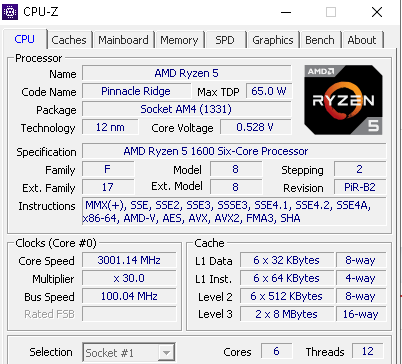 Doesn't it mean that the CPU is based on the Zen+ microarchitecture? Even the core's name (Pinnacle Ridge) is the same as in the list.

ChumP said:
Have you tried the memory modules individually (each one of them separately)
Click to expand...

Not yet, but I'm planning to do so. I have some suspicions that the GPU is also be might related somehow to these crashes.
0

blablaalb said:
Doesn't it mean that the CPU is based on the Zen+ microarchitecture? Even the core's name (Pinnacle Ridge) is the same as in the list.
Click to expand...

Yeah, that's the AF... when you posted your specs you mentioned:

That's why I thought you had the 14nm first gen one.
0

I disabled the Secure Boot and NX Bit options in the BIOS settings and since then my PC hasn't crashed for two days. I think I solved the issue.
0