Long story short, I have an 11 years old Medion Erazer x6815 laptop . It still works fine for what I need, so I've decided to upgrade it with SSD (Crucial MX500).

And of course, after that I've updated my system to Windows 10.

And the problems began. The critical one was that Win10 doesn't support Intel HD3000 GPU. Microsoft has some drivers for this GPU, for some they even work, but I've tried dozens of versions and nothing helped. I NEEDED to upgrade BIOS. So I did it.

Problem with GPU has gone, but I've got a more serious one instead. The system cannot start from my SSD. It just hangs on Medion logo, unable even to enter BIOS. I've even made full CMOS reset (and changed the battery to a new one). But it didn't help (it has fixed a 10-years old bug, however, where my system couldn't normally shut down - I was using restart with the laptop unplugged - restart didn't work normally either - it first used to shut down computer completely and then power it up somehow, but the power on part wasn't working if unplugged).

The weird thing is, if I swap my SSD with my old HDD, enter BIOS, swap again and exit without saving - the system loads and works perfectly! Moreover, the old HDD also works (I am using this laptop with it right now), despite it has WIn7 on board and the new BIOS claimed it is for Win8 only.

After CMOS reset and rebuilding MBR I don't know what to do. Constantly swapping is not an option 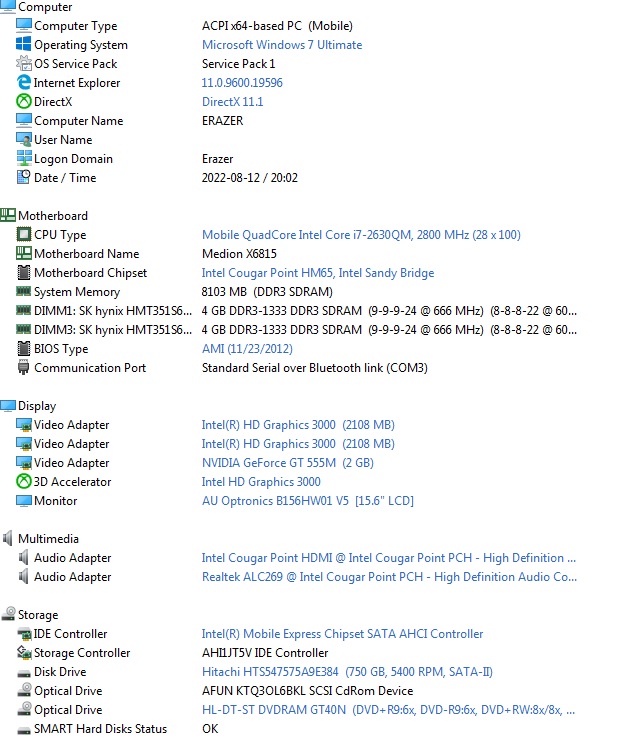 SSDs cant work with all mainboards, some old mainboards expects for drive to report some HDD specific data
0

Yeah, except it worked, have you even read the question?
0

if it worked with old bios, then downgrade bios
0

Impossible. Manufacturer has restricted this. It was first thing I've tried.
0
E

Have you checked for upgraded chipset and SATA drivers here ?
https://www.driverscape.com/manufacturers/medion/laptops-desktops/x6815/29146
The new Bios could need a newer one.
0

^Yes, but some of my drivers are newer then those.
Unfortunately, a newer bios does not exist. There was version 2.09 made by some enthusiasts, but it had its own bugs and it's not available atm.
Moreover, I highly doubt BIOS is to blame. In fact, I am writing this message from my new SSD with Win10 right now (booted by swapping). Everything works perfectly. I begin to believe there are some issues with partitions deeper than just MBR. And I want to try radical solution - to destroy 3 days of my work and to clone SSD again from my old HDD with Win7, and if it boots then upgrade to Win10 all over again.
0

So, it's done. The reason/cause was so simple, yet I could hardly believe it. This thread wasn't meant for bashing, but what else is left. It was all Crucial default cloning app - Acronis True Image. All along. It failed multiply times in creating right partitions and MBR. It somehow managed to create partialy working SSD for the first time, so I haven't noticed anything before trying to replicate the process 2 more times. I've switched to AOMEI solution - maybe not the best out there, but I now have fully updated and working Win10 on my 11 years old laptop. The end.
Reactions: Faust-RSI
You must log in or register to reply here.
Share:
Facebook Twitter Reddit Tumblr WhatsApp Email Link