Just in case you are now aware of this news, according to a recent leaked slide posted by Videocardz, we now finally have the full and proper lineup of Intel's upcoming 12th Gen Alder Lake-HX CPUs for enthusiast workstation & high-end gaming laptops. The lineup includes various SKUs which are aimed at the fastest laptops for content creators and gamers. These chips seem to pack some punch if your ask me. Though, pricing and availability still remains in the dark.

Anyway, some of you might be aware that for the Alder Lake-HX mobile processor lineup, Intel is bringing/using the desktop 12th Gen dies to the laptop segment in a BGA form factor. For this purpose alone, Intel will be using the Alder Lake 'C0' die which rocks a total of 8 P-Cores and 8 E-Cores. These chips will come in the same package size as the desktop parts which are 45 x 37.5mm but have been thinned out to reduce the height from 4.4mm, down to 2.0mm.

Since these are based on the same silicon as the desktop parts, one should also expect similar core count, cache sizes, and clock speeds.

One major feature is that Intel's Alder Lake-HX CPUs are going to be the first PCIe Gen 5.0 platform for laptops, featuring a total of 48 PCIe lanes. These comprise 16 PCIe Gen 5, 20 PCIe Gen 4, and 12 PCIe Gen 3. As one would guess, these would allow for better I/O capabilities than the existing Alder Lake-H lineup which only offers 28 PCIe lanes, which include 16 Gen 4 and 12 Gen 3.

As for the other significant feature of the Intel Alder Lake-HX lineup, we are looking at full overclock support for both the CPU and DDR5 memory. These will be made possible through an updated ETU (Extreme Tuning Utility), while XMP 3.0 profiles will be available across a wide range of mobility HX chips. All HX CPUs ship with the same base power of 55W and boost power limit up to 157W. 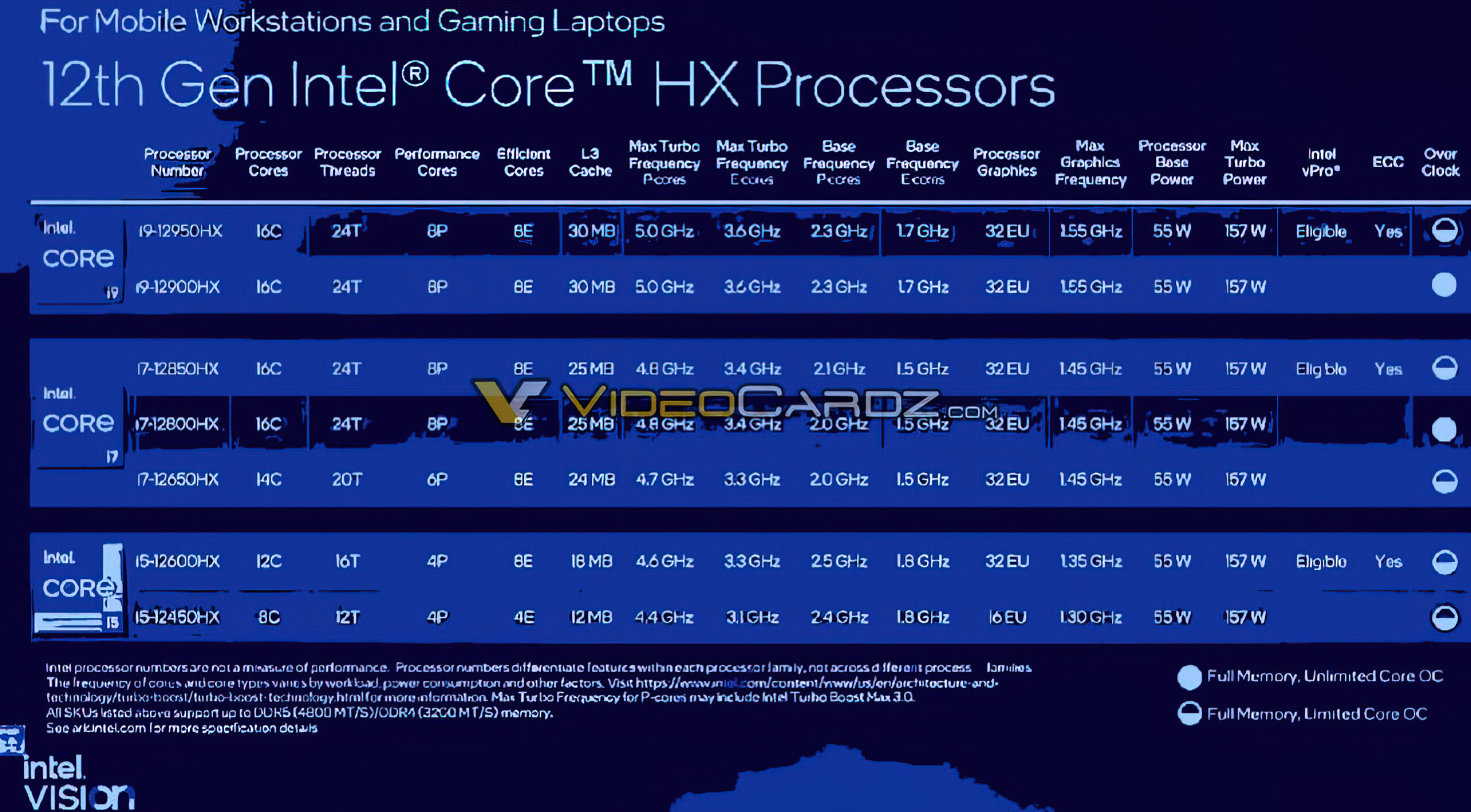 Speaking of the SKUs, there are 7 in total which starts from 8 cores and goes all the way up to 16 cores as shown in the above official slide. There's not a single SKU that doesn't feature E-cores enabled on die. What's really interesting is that certain top-tier SKUs in each segment are ECC and vPRO compliant while the 2nd tier SKUs offer full memory and unlimited core overclocks, while the rest feature limited core OC.

The only department where these chips lack against the Alder Lake-H lineup is the 32-16 EU iGPU which is similar to the desktop parts. We can expect these chips to land in several laptops in the coming months leading to and after Computex 2022, & a formal announcement can be expected at Intel's Vision Event next week.
Reactions: KyaraM and Why_Me
0

If this is anything like the recent test I saw from Derbau8r, at their base speed this should be very comparable to Ryzen's top CPUs at 54W.

Segmenting ECC, when will they learn...
0

Eximo said:
If this is anything like the recent test I saw from Derbau8r, at their base speed this should be very comparable to Ryzen's top CPUs at 54W.
Click to expand...

Which CPU test did he actually do ? Is there a Video as well ?
0

Metal Messiah. said:
Which CPU test did he actually do ? Is there a Video as well ?
Click to expand...

Yes, it was two days ago maybe. Set equal power limits at like 50 ish watts and then test performance. Intel was slightly winning in gaming. It was between the 5800X3D and i9 I think.
0

Uh, okay thanks. I will check it out when I get some free time.
0

It was this one:


Undervolting of the 5800X3D and then the same with an i9-12900K. Last section of the video has a gaming benchmark where it shows nearly equal performance sub-50W. So it should translate very well to the mobile versions of the chip.
Reactions: Metal Messiah.
0
M

Someone actually posted an early review of the Core i7-12800HX CPU. Though these early performance results don’t show a big leap forward.

This leak comes courtesy of the Golden Pig Upgrade Pack team on a Chinese social media website. The testing was done on Lenovo Legion Y9000 with identical specs (other than the CPU of course).

One laptop had the Core i7-12700H (14-core) and the other had the Core i7-12800HX (16-core). Both laptops include 16GB of DDR5-4800 RAM and an Nvidia GeForce RTX 3070 Ti. There were a number of benchmarks shown comparing the CPUs to each other. Those hoping for a major performance increase with the HX variant will likely be disappointed as the 12800HX is only marginally faster than the 12700H in some tests.

Both productivity and gaming benchmarks yielded similar or slightly higher performance. But I think with updated drivers, and firmware the performance might increase in future.

Interestingly, the Core i9-12900HX was also benchmarked, though it wasn’t compared to the Core i7 chips. It was combined with an RTX 3080 Ti. Unsurprisingly, it’s a powerful chip achieving a score of 1927 (single-core) and 23019 (multi-core) on Cinebench R20.

Golden Pig Upgrade noted that because the power consumption is higher in the HX, only flagship laptops will likely include these CPUs due to the cooling requirements. Intel announced a number of upcoming laptops with HX chips including the Dell Prevision 7670, Lenovo Legion 7, and MSI GE77 Raider.