We put Intel's new Core i7-12700K through the testing wringer with DDR4 and DDR5 memory to see if it comes out on top.

Lol no comment on the productivity benchmarks, an absolutely totally not biased preselection of intel-not-friendly benchmark </irony coughcough*
no further comment
And by the way comparing ADL to RL, and giving Intel credits for being more efficient than Rocket-lake, you really gotta have some balls considering RL was just a burning hot-plate.
Reactions: phenomiix6 and VforV

Nice review. MB007 above is just hurt because facts are hard to accept for fanboys, but what ever. Looking at his past posts everything he posts about is Intel bashing.
Reactions: Why_Me and rtoaht

MB007 said:
And by the way comparing ADL to RL, and giving Intel credits for being more efficient than Rocket-lake, you really gotta have some balls considering RL was just a burning hot-plate.
Click to expand...

Lol @ your post. Nothing wrong with comparing previous gen with new gen. Intel managed to almost double their efficiency and is now reasonably competitive with AMD on efficiency. Everyone knows Zen 3 is a unicorn of efficiency. For Intel to get more competitive in efficiency vs Zen 3 is/was a huge focus for them. They've done that with a first gen hybrid CPU. And they are beating the competition in perf/price (although total platform costs remain similar). Too bad the H and B series boards aren't yet available. Let's face it - competition is raging! But yes, Rocket Lake was a huge failure, so everything is better than that. No extra points there from me...

Still Zen3 wins in efficiency and I expect Zen3D will match or beat Alder Lake, while also being more efficient, which will make it even better. I like that a lot in a CPU, because I don't have to buy a better cooler each time I upgrade.

I went from Ryzen 2600 to 3600 to 5600x now on the same budget CPU cooler and the heat and noise is the same. Theoretically I can go to 5950x (not that I intend to) and still be in my 200W cooler's performance bracket and have low noise and good cooling.

Just because the cooler is rated 200W does not mean I should put a 200W CPU on it, the noise from going full ham would make me throw the PC out of the window, so I would need a more expensive cooler for Alder Lake and probably a bigger PSU (besides the MB, CPU and RAM - last one optional). Yeah, Zen still has the win for me now and more so with Zen3D.
Reactions: artk2219, fball922 and Jim90 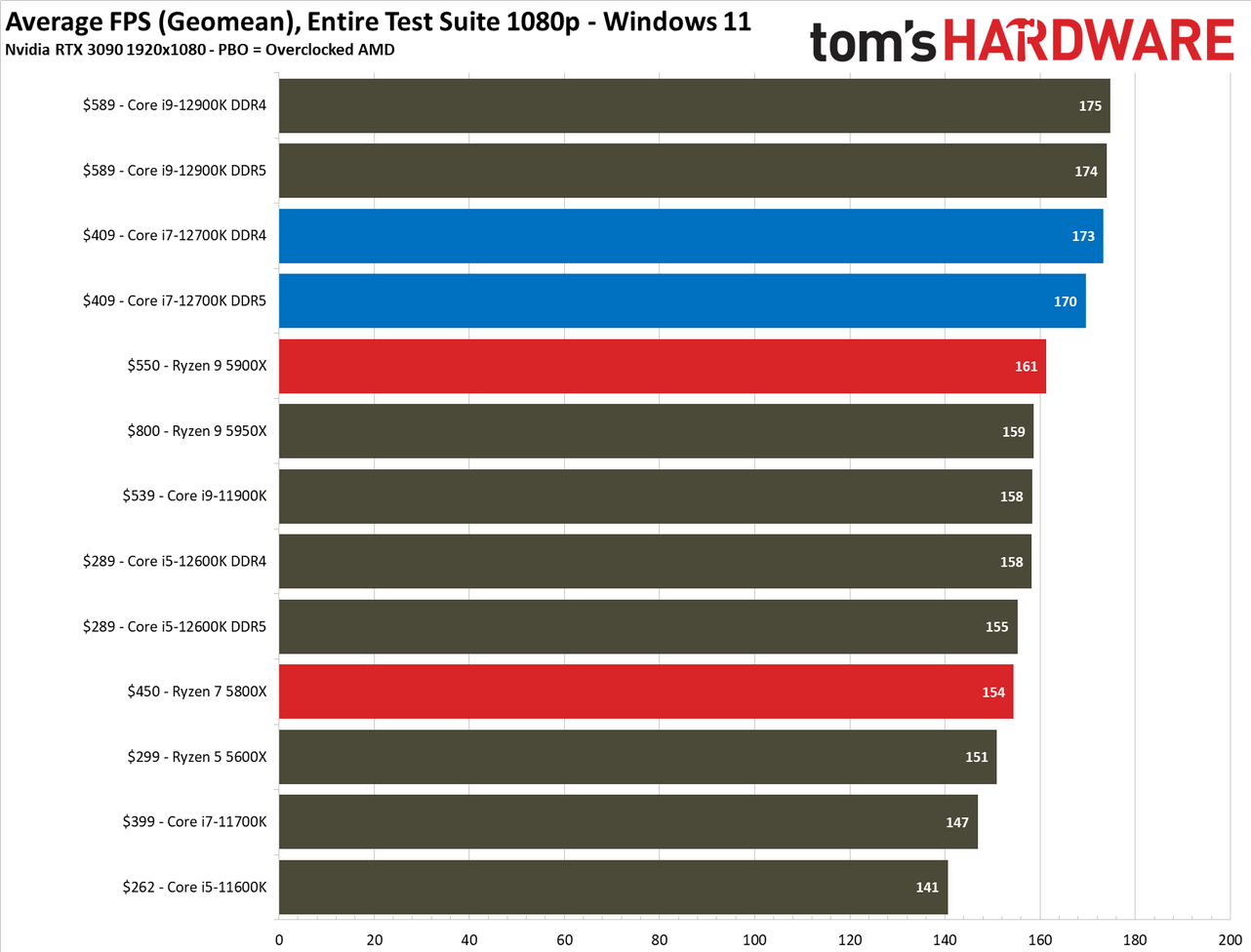 Might want to adjust the charts to reflect the 5800X's lower price, it still shows $450.
Reactions: artk2219 and VforV
S

Might want to adjust the charts to reflect the 5800X's lower price, it still shows $450.
Click to expand...

All prices listed are MSRP. Do you expect them to constantly monitor prices and update the chart every day as prices move around?
Reactions: Howardohyea, Why_Me, rtoaht and 1 other person

spongiemaster said:
All prices listed are MSRP. Do you expect them to constantly monitor prices and update the chart every day as prices move around?
Click to expand...

That was a really fine article, but the problem is DDR5 supply which is NON-EXISTENT.
DDR5 is essentially UNOBTAINIUM, except for reviewers on the interwebs.

"Sources said that the PMIC chip is currently in very short supply, while the purchase price of the PMIC chip to be used in DDR5 memory is 10 times more expensive than the corresponding chip in D4, and the procurement cycle is at least 35 weeks."

35 weeks is well out until June/July 2022 so if one is building a system NOW, that is a long time!

And no one at Intel figured there was a supply chain issue with PMIC chips before they released all these motherboards for sale?

Sorry but that situation is beyond stupid.

Fortunately, the most critical piece a graphics card I got from EVGA 3080 FTW3 Ultra came two weeks ago after being on the waiting list for ONE YEAR!

Good review but I did find this paragraph amusing.

"The Core i7-12700K also has a much more modern platform than AMD's AM4 ecosystem. Leading-edge DDR5 and PCIe 5.0 interfaces will add some cost in the early days, but support for DDR4 can help reduce that overhead. It's also clear that you won't need to adopt pricey DDR5 memory to unlock the best gaming performance — unless you have a very specific need for DDR5 throughput, it's probably best to skip it until it matures further. "

It starts off saying LGA 1700 is a much more modern platform. Then the rest of the paragraph is saying it will add cost and you should skip it until it matures.

Haha Intel wins, but you cannot actually buy the test build anywhere! Glad I bought my Ryzen 9 5900X build when I did. Significantly cheaper than what's available now.
Reactions: spentshells

What is the power consumption in gaming?

spongiemaster said:
One minute of searching on AMD.com reveals the current MSRP of a 5800x is $449.00

The price on AMD's store does not necessarily mean current MSRP.

It's from AMD, so it's exactly that. Amds suggested msrp.
Reactions: Why_Me, rtoaht, Memnarchon and 1 other person

My point was, as VforV already stated, just right after me, this here:
"But yes, Rocket Lake was a huge failure, so everything is better than that. No extra points there from me... "
You can not really give credit for that sorry. If you call me a fanboy for that, whaaaatever dude.

And if you want it or not, if you ignore biased synthetic benchmarks like geekbench or cinebench (after R15 they just started bending the charts to intels pleasement) you will notice, that the ryzens are still faster than ADL in proper multi core scenarios (e.g. blender), and yes in single core workloads (e.g. gaming and plenty of non-scalable applications) ADL clearly has an advantage due to its ipc and tdp scaling so they rather easily win.

And yet dont forget, how old the "latest" ryzens cpus already are while ADL still did not really hit properly the market in big numbers.
It took Intel quite a while to make their own proper cat-and-mouse-game move and AMD already has a response to it starting in 2022 (3dvcache).
This will be practically mere a shortterm comeback of Intel.
Reactions: VforV

Wow, Intel 12900K is upping desktop performance even with DDR4 memory. I think it was a mistake that I recently built a 5950X system. Sure, it's fast, but I should have waited for Alder Lake.

M42 said:
I think it was a mistake that I recently built a 5950X system. Sure, it's fast, but I should have waited for Alder Lake.
Click to expand...

Nah, that thing is a beast in MT. Depending on workload, you can also get a boost from upgrading to the equivalent Zen 3D CPU sometime in the future. While you could've waited a bit and (probably) gotten a better price on the 5950x, I don't think any rational person would say it was a mistake. Unless of course you bought it specifically for gaming...
V

M42 said:
Wow, Intel 12900K is upping desktop performance even with DDR4 memory. I think it was a mistake that I recently built a 5950X system. Sure, it's fast, but I should have waited for Alder Lake.

You should have waited for Zen3D if you have that kind of cash to throw around (though you can still upgrade, so not a big deal). Or better yet buy both, an Alder Lake kit and a Zen3D one and then you could see which reviews are shilling/unprofessional and which are good.
Reactions: Jim90

VforV said:
You should have waited for Zen3D if you have that kind of cash to throw around (though you can still upgrade, so not a big deal). Or better yet buy both, an Alder Lake kit and a Zen3D one and then you could see which reviews are shilling/unprofessional and which are good.
Click to expand...

Yes, that could be true about Zen3D, but it's not here today and Alder Lake is. The Alder Lake reviews and benchmarks across many websites seem to be consistent, so I don't think there is any Intel bias.

I think it is great for us consumers. I have built mostly Intel systems until this very recent (literally a month ago) 5950x system. I justified the 5950x because I figured that DDR5 memory was going to be expensive and difficult to find, but I didn't count on the cheaper Intel Z690 motherboards using DDR4 memory clobbering Zen3 in most benchmarks.
Reactions: Why_Me, rtoaht, CorpRebel and 2 others
J

The avx2 performance looks pretty decent in these benchmarks. It will be interesting to see how Golden Cove's avx512 will perform in the server chips.
Reactions: rtoaht

larkspur said:
Everyone knows Zen 3 is a unicorn of efficiency.
Click to expand...

Unicorn?? There's only two horses in the x86 stable. And one of them is running a fever.
Reactions: deesider and spentshells

On my Ryzen/X570 based system I have 6 devices connected via USB: Keyboard, camera, sound system, mouse, headset, and more. AMD recently and finally addressed and fixed a major USB problem in the X570 chipset. But the issue existed well prior to AMD even acknowledging it. I spend some very frustrating hours, days, weeks, and months trying to fix it on my own including RMA's on my rig's new RAM, PSU, memory and CPU. I even spoke on the phone with AMD tech support but all they did was just give me some vague generic suggestions: lower my RAM's clock speed, etc. Eventually AMD acknowledged the USB issue and later fixed it via MB firmware updates. Afterwards things became mostly normal but even today my Sound Blaster Katana isn't flawless. So when Alder Lake was launched and Microsoft announced their specific support for it with Windows 11, I decided to move back to INTEL. INTEL has longevity and maturity working together with Microsoft and Windows. Prior to the release of this article I had ordered an i7-12700KF because I suspected the same thing that this article has confirmed: The i7-12700K(F) is the power gamer's CPU. This new X-86 hybrid architecture seems amazing. I knew it was just a matter of time when INTEL, the sleeping giant, would respond. Sure, AMD might throw a larger cache on the next round of Ryzen's, but after I all went through I lost some trust with AMD. Regardless, we consumers win with healthy competition. I do not believe Alder Lake would be here today without AMD's Ryzen.
Reactions: rtoaht and bolweval

Great review & article. I really appreciate the efficiency & power draw under a variety of loads: very few outlets will do that! Have you been able to reproduce AnandTech's significant Speedometer & Geekbench 5 nT boosts from DDR5 vs DDR4?

However, the Core i7 12700K has four fewer E-cores than the Core i9-12900K and a 300 MHz lower boost clock, marking the return of meaningful segmentation between the Core i7 and i9 lineups.
Click to expand...

Should be "200 MHz" lower boost, not 300 MHz. This issue seems to be repeated in two tables and a few times throughout the article, but then it's corrected once:

The Core i7-12700K has eight P-cores and four E-cores, for a total of 20 threads. The P-cores run at a 3.6 / 5.0 GHz base/boost, but that isn't too important given the entirely new hybrid architecture — the P-cores process roughly 19% more instructions per cycle and the SoC realizes performance gains from using different core types for different tasks.
Click to expand...

For "Office and Productivity on Core i7-12700K, the Outlook bench's CPU labels were cut off. Not a big deal, but unsure which one is DDR4 and which is DDR5. @ikjadoon
Anadtech used CL22 DDR4 for some reason, looked like they wanted to have bad results on that front. CL16 or even 18 (which also comes close) is available at very good prices and perform near or better than DDR5 4800 sets.