New build a couple of weeks ago.

PBO is enabled in the BIOS, D.O.C.P RAM profile is enabled. BIOS is updated to the most recent 2203. Windows 10 Power Plan is set to Ryzen High Performance.

Following on from this thread I have now replaced the stock AMD Wraith Prism cooler with a Corsair Hydro H100i RGB.

CPU Temp?
Screenshot showing HWMonitor and Corsair iCUE fan settings during a 1hr x264 encode below. For 95% of the time the CPU was at 71-75 degrees.

The machine will be doing a lot of x264/x265 video encoding , and so the CPU will be under heavy load. Is there an acceptable idle/full load temp range for a Ryzen 3900x, after a bit of research am I correct in assuming that mid 40's idle, mid 70's full load, is acceptable? I read somewhere that 88 is the wall?

Air Flow?
The H100i is mounted at the top of the case and currently blowing out. The manual states "For the best cooling performance, we recommend mounting the fans as an air-intake to your PC case." This means that to have the fans as an air-intake, the fans would have to be mounted with the lighting rings against the radiator and the ugly side of the fans facing into the case!? I see no other way than to have it blowing out of the case?

Auto Boosting?
As in HWMonitor screenshot below, is that correct?

Tightening the thumbscrews holding the pump block onto the CPU is nerve racking! Tightened with fingers then just a couple of turns with small screwdriver to take the pinch. 😱 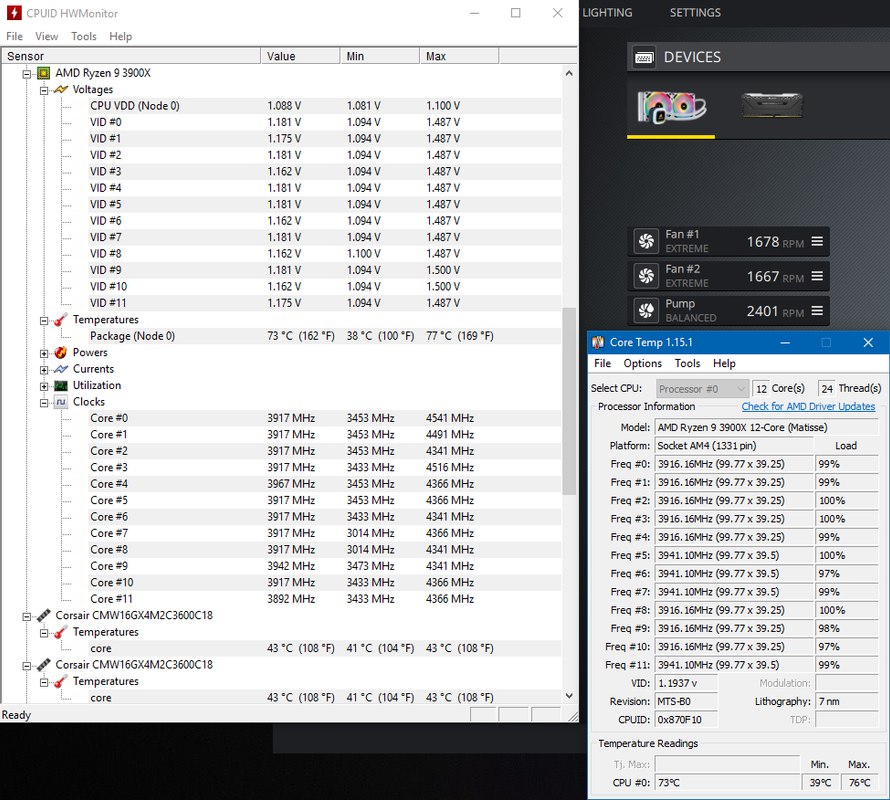 CPU temp looks okay to me. After a 1 hour stress test it looks like the cooling system is keeping up with the CPU very well.

Air flow is probably fine. It might do a little better with the rad mounted on the front with fresh air blowing through. I don't think it's a huge advantage though. You might want to turn up the speed of the front intake fans to compensate for the restricted air flow.

As for autoboosting I think the top speed on the X is 4600. But that might be only for a single core. If you run a single threaded app you might see it boost to 4600 on a single core. Which you do see a few cores boost up towards that. (core 0, 1, and 3)

My only other comments would be to set the pump speed to a fixed percentage. As fast as it will go without you being able to hear it over the fans when the system is idle. Likely 100%. When set to "balanced" the pump speed will vary with the temp of the processor which is not good for the pump. Pumps want to spin the same speed all the time. If you can set the fan speeds to vary based on the fluid temp. That will prevent them from "Sawing" up and down when doing something that only loads the processor for a second. That's not always an option with AIOs.
Reactions: Nucleus01
0
N

Really appreciate the detailed answer and advice, thank you. I'm by no means a tech head, in fact I'm new to all these settings, I had a look at Ryzen Master, scratched my head and uninstalled it - for now!

I'll increase the pump speed as you suggest, it's very quiet and cant be heard. Obviously being new to this I'll be monitoring things for some time to come, and as confidence grows I'll be more inclined to try different things. Thank you, really appreciated.
0
G

@Nucleus01 That's the best way to learn. Start simple and slowly work your way into more complex things as you gain confidence and experience. This forum will be here for you too.
Reactions: Nucleus01
You must log in or register to reply here.
Share:
Facebook Twitter Reddit Tumblr WhatsApp Email Link