Question Smartphone hotspot is connected & secured but no internet access on laptop ?

So I used to be able to easily use my Motorola Moto e6 (XT2005DL) smartphone as a hotspot for my Windows 10 Dell Inspiron 5502 Laptop.

Back when the hotspot was working properly, I had Mcafee antivirus installed on Laptop. Now I have Webroot SecureAnywhere. However, I tried turning off the Webroot "Realtime Shield, Web Shield, and Firewall" protection, and I still can't access internet.


I tried another Windows 10 computer (also with same Webroot software installed) with same results. Tried both Firefox and Microsoft Edge browsers, both nothing. Firefox will give a "performing a TLS handshake to browser xxxx and just sit there.

I tried "forgetting" the Smartphone hotspot network on the Laptop, and re-connecting again. No good.

I just have no clue if the issue is with Windows 10, or the Smartphone. Weird.

Uninstall Webroot SecureAnywhere from the laptop, then make sure Windows Defender is turned on.

If internet access is now okay, Webroot SecureAnywhere was the cause of the problem.

Provided you stay away from "dodgy" websites, Windows Defender is all you need on Windows 10.
0
F

Phillip Corcoran said:
Uninstall Webroot SecureAnywhere from the laptop, then make sure Windows Defender is turned on.

If internet access is now okay, Webroot SecureAnywhere was the cause of the problem.

Provided you stay away from "dodgy" websites, Windows Defender is all you need on Windows 10.
Click to expand...

Thanks for the reply.

I tried uninstalling Webroot. No good. It still doesn't work.

When trying to connect to a website, it just sits there. It never 'times out'.

When I right-click the network icon (system tray) and choose "troubleshoot problems", it says it couldn't identify the problem. It never gives me the option to choose, "I'm trying to reach a specific website...."

Something has changed on the smartphone perhaps. But why would it be "connected and secured" (indicating the laptop senses internet access) yet I can't access the internet? lol

I also had Avira security app on my smartphone, which I uninstalled (thinking that may be blocking things). No good. Still doesn't work.

I tried connecting an old tablet to the Moto e6 hotspot. Tablet is an ACER model B3-A30 running Android 6.0. No Good.
Similar to the Windows 10 laptop and desktop computers, it connects, but there is no internet access.

The following screenshots are of the tablet.

FIRST IMAGE: is while the tablet is connected to the Moto e6 hotspot.

SECOND IMAGE: While there is no connection.

Notice in the first image, the tablet is simply indicating this site can't be reached, yet in the second image, while no connection at all, it indicates no internet

It's as if the computers and the tablet connected to the hotspot 'sense' the internet connection, but something is preventing actual internet access.

At this point, I'm guessing the Smartphone is the culprit. Maybe an update has changed a network/security setting....Maybe I somehow inadvertently changed something. Going through all the settings I can't see anything obvious.

I'm stumped. It was so easy to switch to the hotspot a month or 2 ago. 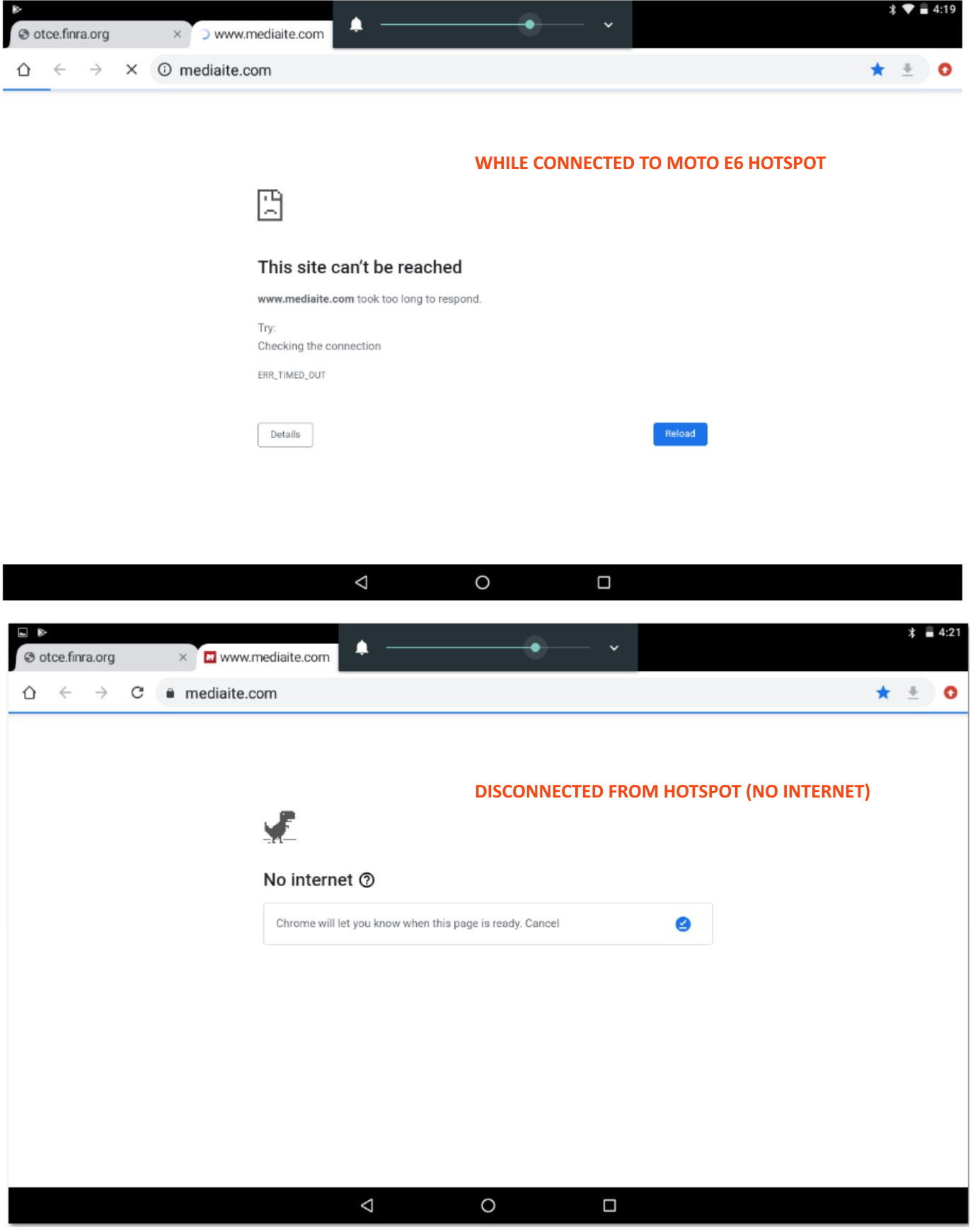 
According to the tech representative, it is Tracfone which is restricting the Hotstpot capability. It was hard to understand him, and always a bad phone connection it seems, so I will have to call back a few times to get the entire picture, but I was told my Tracfone "PLAN" doesn't include Hotspot usage.

Maybe something has changed with the Tracfone plans, or maybe, you get just a small amount of Hotspot capability for a short time after adding.

Anyway, At least it's not a setting that I inadvertently changed, or a hardware problem, or Windows 10 update issue.