I'm having some strange issues with lag recently. I have noticed it when playing games such as Counter Strike and Diablo, but also seems to affect discord (Others in the chat say I cut in and out at times -- Where as I seem to not have any issues hearing them). It could also be happening at other times but its so inconsequential that I don't notice. It seems to be a very sharp lag spike for a very brief moment. It occurs at random times, sometimes just once, sometimes in spurts, but does seem to become more frequent when in-game compared to idling on desktop or surfing the web (Though it still occurs). The lag spike is just for an instant which generally leads to rubber banding, commands not being sent to server, etc. I have attached screenshots of a constant ping to both google and my isp. The first and second photos are a constant ping to google. The third and fourth are to google and my isp at the same time. I have tried pinging my router as well, but I don't have any latency from it, even when I have the spikes. 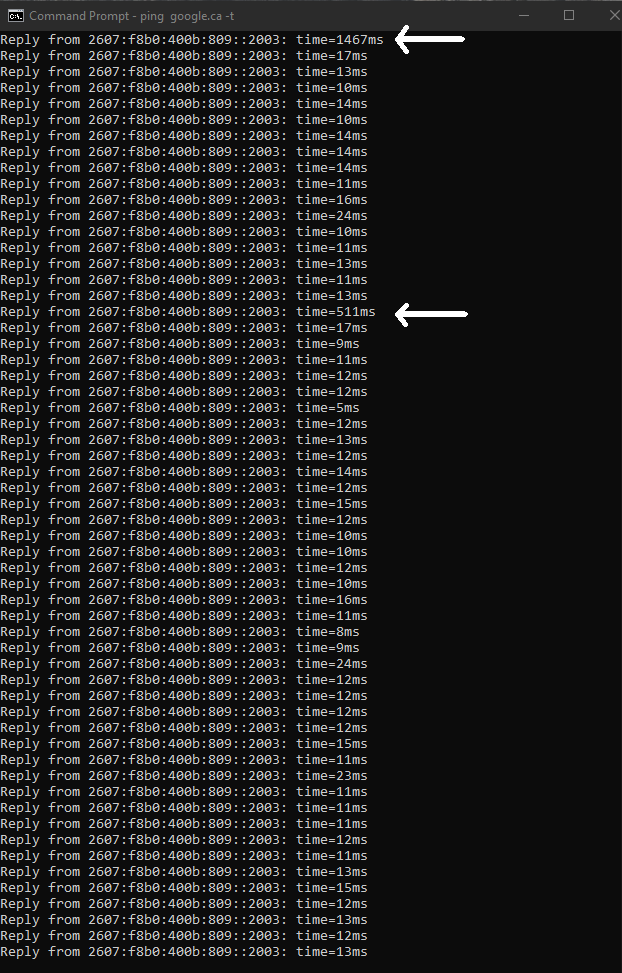 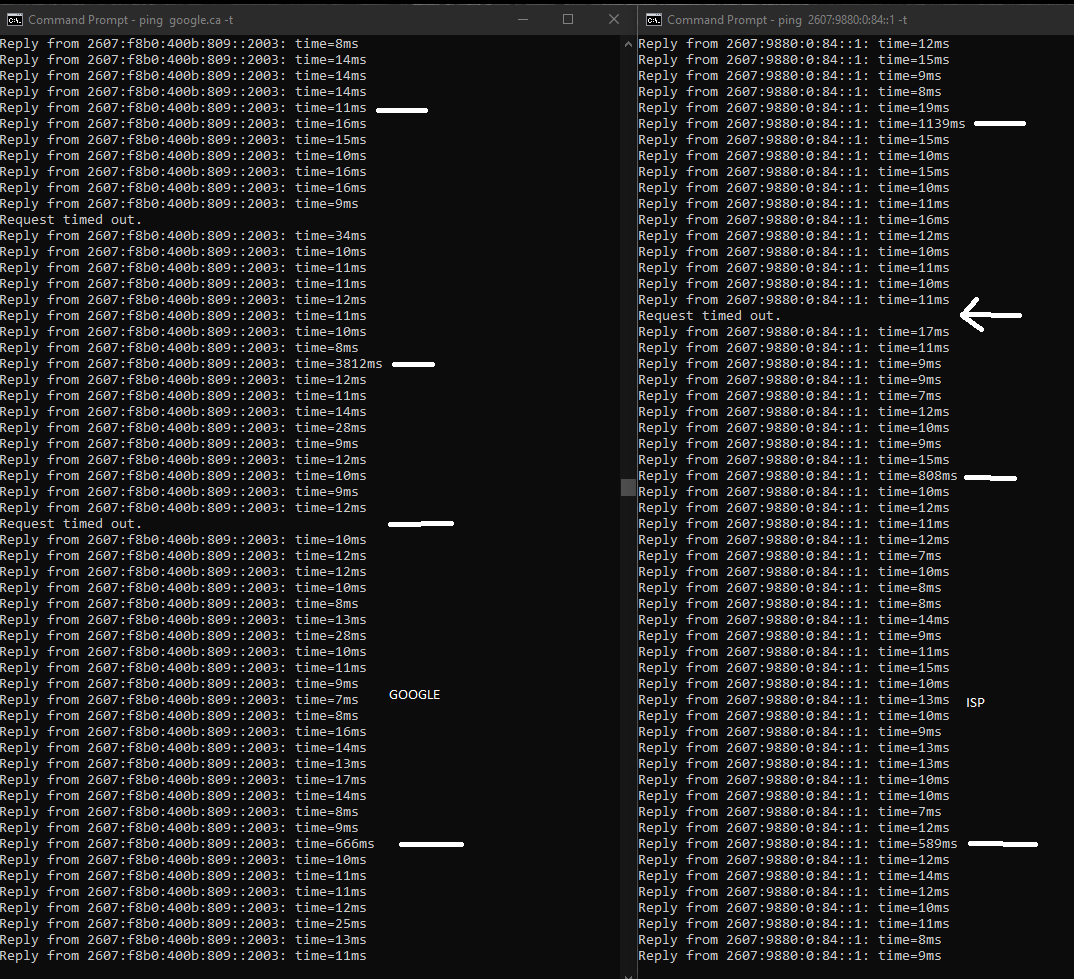 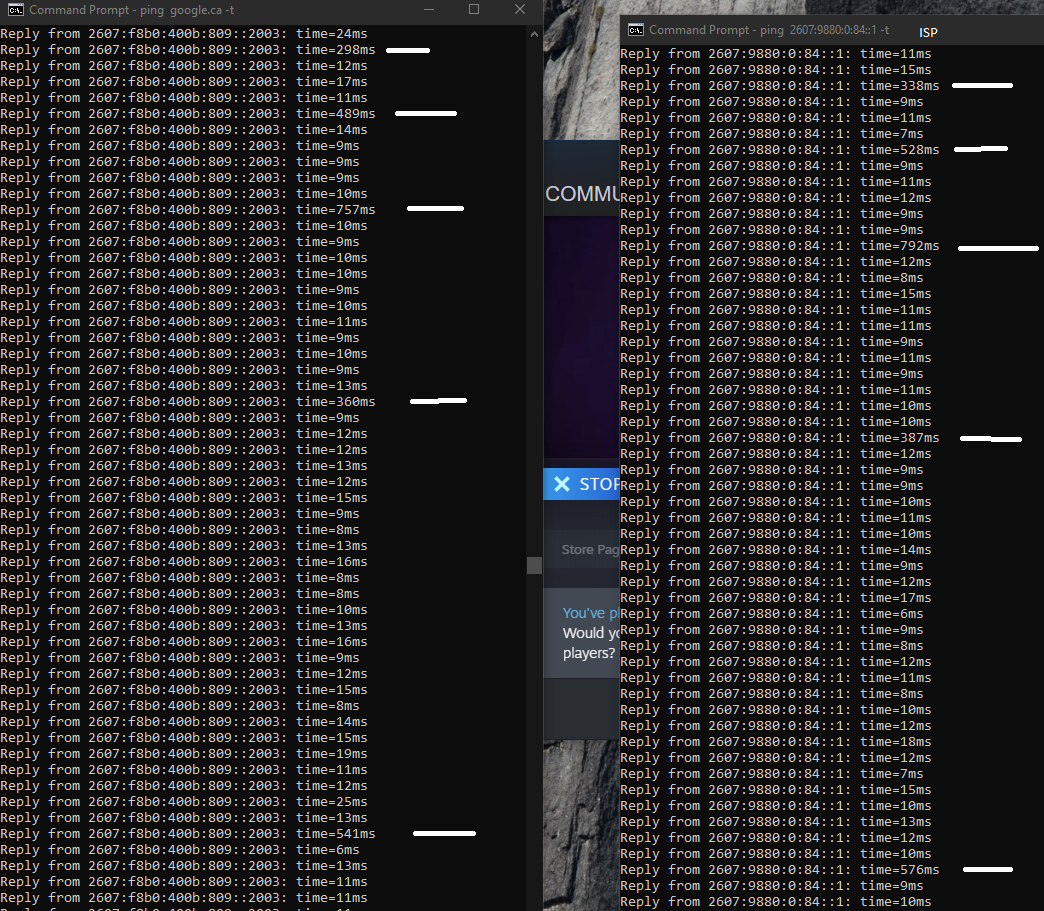 As you can see, the spikes are random and are only long enough for a single ping. I have a hardwired connection. I have tried different ethernet cables, different routers, different modems, changed my ISP, tried a wireless card, taking all splitters off the cable lines, using onboard graphics instead of my graphics card. My cpu temp idles at 30-35C and goes to 60-70C when playing a game. Thats within normal range under load. Internet is 300mbps (Yes I do get the full 300mbps during speedtest so bandwidth shouldn't be an issue) and there is no one else using the internet. I don't really even know what else to try. Is it the computer? Is it the internet? I'm not even really sure what my next move is now.
Last edited: Mar 12, 2020
0

Try changing your DNS server. I like Google DNS. But the best DNS varies by where you are located. OpenDNS is another popular one.
0
B

Can you disable IPv6 support and only use IPv4 addresses. IPv6 and IPv4 use different routers/paths in the internet many times and IPv6 seem to have more issues.

You want to run ping to your router IP also. This will quickly tell you if the problem is your pc or maybe the router. You will have to do much more extensive testing to find where outside your house the problem is.
You must log in or register to reply here.
Share:
Facebook Twitter Reddit Tumblr WhatsApp Email Link