There are two versions of the 2TB Western Digital Red HDD. The WD20EFRX has a 64MB cache. The WD20EFAX has a 256MB cache.

The 64MB version is the one commonly available. It's the only version on PCPartPicker. And I've had one in my current computer as secondary mass storage for four years, so I'm definitely considering it for a new build.

I wasn't even aware that the 256MB version existed until today. I visited WD's Web site and found they were directly selling both versions for the same promotional price ($70). I also found it hidden away on Newegg, also for $70. (The 64MB version is $70, but currently out of stock). Everywhere else I've checked only has the 64MB version for $80 and up.

Now you'd think the 256MB would be more popular, as the extra cache should provide at least some performance improvement. And buying it for $70 would seem a no-brainer. But its apparent obscurity makes me wonder whether there's some problem or disadvantage with the 256MB version, or whether WD are discontinuing it.

You could ask WD if the WD20EFAX is an SMR model, but I'm betting that they won't tell you.

WD's web site states that both drives are designed for NAS:

Now ask yourself the question, are SMR drives suited for NAS applications? For your answer, read WD's own white paper:

So is the WD20EFAX NAS drive an SMR model? If so, then can it really be a drop-in replacement for your NAS?

And just to complicate things even more, some of WD's models actually spin at speeds different to those stated in the datasheets and on the web site.

*Note: WD being annoying by introducing inferior drives into the market without changing the model code. Just like the new Seagate 2TB drives, be prepared to roll the dice if you purchase one of these online. You'll either get the slower three-platter variant (which weighs around 640 grams) or the "perfect" two-platter one, at least until WD gets its 1TB platter production up to spec.
Click to expand...

Note: These are brand new as of March 2019 and certainly aren't helium-based. (Note the likely-similar Blue EZAZ models in the other section.) Some correspondence with a reader and WD Support confirmed SMR and three platters inside the 6TB EFAX, of which the case design is unlike anything I've seen before from WD. (The same correspondence also revealed a weight of 567 grams.) It would seem according to other online sources that the 2TB model also employs SMR.
Click to expand...

Thanks for shedding some light on the mystery.

But please help me understand what I should make of it. Please note that I'll be using the drive as a single desktop drive, not in a NAS. I currently have an EFRX version that has been happily (and quietly) chugging away in my computer for just over four years. I chose the WD Red drive because it has a three-year warranty, and some sources suggested it might be more reliable than the equivalent Blue. It has worked well for me, and thus seems a good choice for my new build.

Given that "off-label" use, should I be concerned about SMR, or about other aspects of the EFAX design? If the EFAX indeed has a single 2TB platter, shouldn't that mean it's quieter and uses less power than than a drive with two or three platters?

The 2.5-inch Seagate FireCuda is the alternative I've considered. It's a 5400RPM laptop version with a 5-year warranty. It should also be quiet, and the small amount of solid-state memory buffer might (or might not) give better performance than other 5400RPM drives. But I've had problems with Seagate drives in the past, and the sour taste in my mouth prejudices me against Seagate. I don't know if that prejudice is still justified.
0
F

I can only point to this thread:

I can't say whether the OP's experience reflects the general reliability of the FireCuda, but it doesn't fill me with confidence.

As for SMR, I would think that you would pay a performance penalty only during extensive write operations.

One would expect that a single platter design should be more reliable than two, but you are not comparing identical technologies. I would be asking whether the EFAX spins at 7200 RPM and whether this makes it inherently less reliable than a 5400 RPM model.

If you can afford a Hitachi, I would go with that. That said, many WD drives are rebadged HGST models, especially the helium ones.
0
J

fzabkar said:
One would expect that a single platter design should be more reliable than two, but you are not comparing identical technologies. I would be asking whether the EFAX spins at 7200 RPM and whether this makes it inherently less reliable than a 5400 RPM model.
Click to expand...


I don't know what to make of these numbers. If the EFAX has fewer platters, why does it weigh more? But it seems to use less power overall. The idle is quieter, but the seek is noisier. It looks confusing and contradictory.

I found a review of a WD Blue laptop drive that uses SMR: https://www.newegg.com/Product/SingleProductReview?reviewid=5188127

While [SMR] allows significantly higher capacities, it creates some complexity to writing. If the drive needs to write data in the middle of existing data, it can't just "place" it there like a HDD using PMR technology because other data also overlaps it. What it has to do is put the data in a temporary location, then re-write all the shingled data afterwards to the end of the track break.

What does this mean for you? No change really in the way you use it. Just be aware that writes to the drive place the data in a temporary position, which is then relocated and shingled later on. The drive is smart enough to do this when you aren't busy, but this will make the drive sound like it's doing a lot of work even when the computer is idle. So if you hear the drive churning away while you are seemingly doing nothing - this is completely normal on any drive using SMR. The constant busy sound is not a defect, but rather a side effect - and it stops when the shingling is complete.

If you use this as a main system drive, there are so many random writes with the paging files and temp files that it may never fully shingle the drive, making it sound as if it never stops working. For that reason, these are best used as storage drives that are read to often, but written to rarely. Don't even think about using an SMR drive in a RAID setup as you'll get very poor performance.
Click to expand...

To me that would suggest reduced reliability simply because of all the extra work the drive has to do. The extra cache probably assists in the shingling process rather than improving performance. WD themselves aren't helping. They almost seem to be going out of their way to conceal the difference between the two versions.

Maybe the answer, then, is to get an older EFRX while I still can?
0
F

The datasheet states that the WD100EFAX is "5400 RPM class", but the HD Tune test results are consistent with a 7200 RPM drive. 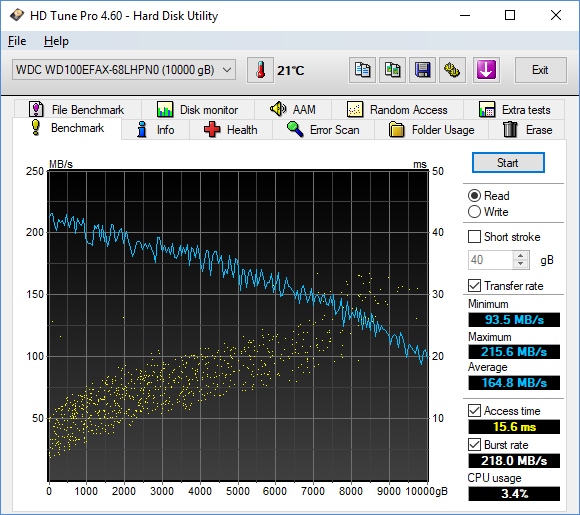 I opted for a 2TB 3.5-inch Seagate FireCuda. That was actually my initial choice, more about 7200RPM and a 5-year warranty than the hybrid SSD feature. When I decided on an X570 motherboard rather than a less expensive B450, I thought I'd go with a less expensive HDD like the WD Red.

Last weekend, while I was exploring the mystery of the two Red versions, both Newegg and Amazon had the FireCuda on sale for $80, comparable to the WD Red. So I went for it. It's supposed to arrive tomorrow.
0

I am now inclined to perform some pre-deployment testing to determine which to place in the production environment - HD Tune / WD drive tools come to mind. I would appreciate suggestions on methodology or utilities that may highlight the differences between them, along with some idea of what statistics would be significant/relevant - in return I will gladly post results here!
Last edited: Nov 15, 2019
0
F