Question x570 Elite Aorus - not responding (no boot, no post, no debug leds) but videocard lights up

I started installing my new build a few days ago. All parts are completely new and should I installed them carefully. I'm not new to that, so for now I'd assume, that it's not due to wrong handling.

The Problem:
Motherboard doesn't post or boot, no fans, debug led are dark (A). Only a white led (B) close to the I/O Ports flashes shortly. I don't think it's the PSU, as the led (C) on the RTX is on while on power.

What I've tried:
Is there anything else, I could try before returning the motherboard?
Thanks in advance! 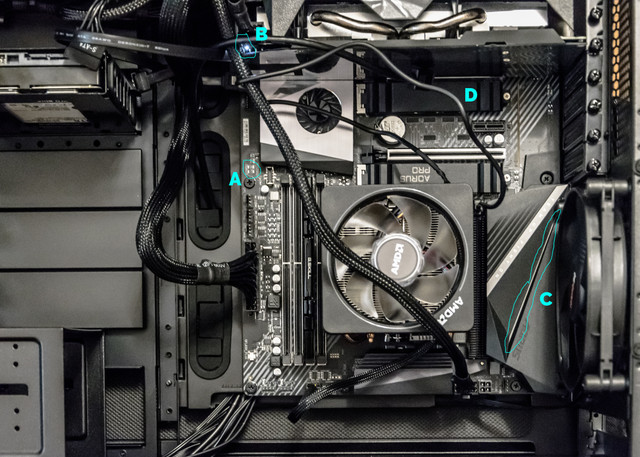 is the image upside down? why is the gpu not using the the pcie slot closest to the cpu?
0
D

rgd1101 said:
is the image upside down? why is the gpu not using the the pcie slot closest to the cpu?
Click to expand...

Yes, sorry, apparently I can't insert a new picture.
The PCIe slot closer to CPU would have blocked one USB slot I need.
0

is a modular psu. did you check the connection on the psu?
0