[SOLVED] How can i remove a virus without damaging the software infected? Win32/Floxif.H virus specifically.

Previous Next Sort by votes
F

My microsoft defender is going crazy with this virus: 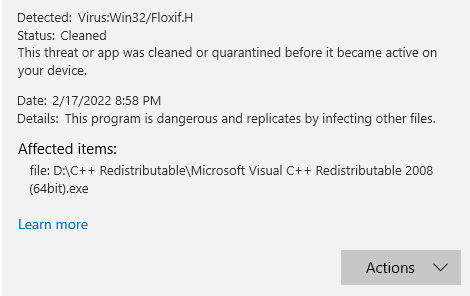 Apparently, it self-replicates infecting other files and has affected plenty of my files, from work files to game files to even basic software like C++ redistributables.

Due to the nature of the files infected i must get rid of it without damage or losing the infected files because replace some work files would be practically impossible and i REALLY need them.

1. Using microsoft defender offline scan but the scan was just a quick 2 minute scan that did nothing, my PC still has that dreaded virus because as soon as i started using my PC microsoft defender jumped to tell me it found more instances of Win32/Floxif.H and refused to let me use some files. In the screenshot above it says it cleaned it when it found it, but i have my suspicions. The UI of microsoft defender is very weird so i don't really know how to make sure it is working properly, sometimes it has warned me MULTIPLE times of the same files, even after it "cleaned" them.

2. Using malwarebytes scan not only did NOT found the virus, it quarantined lots of files claiming to be malware that are VERY important to me and was about to delete them, so i had to restore them. When i used microsoft defender to scan a folder where malwarebytes supposedly found a malware was...it found nothing wrong. Malwarebytes quality seems to have decreased over time, as it didn't did anything good.

I am at my wits end...i don't know how to get rid of this self-replicating virus/trojan without damage ANY file infected.
2

A complete wipe and reinstall is the ONLY way you are going to get rid of this completely. This is why you keep multiple backups of important files. And next time stay away from wonky sites and software.
Reactions: boju
-1
S

Tried it and didn't work, plus it says in it's website that it removes files.

How do i uninstall this?

A complete wipe and reinstall is the ONLY way you are going to get rid of this completely. This is why you keep multiple backups of important files. And next time stay away from wonky sites and software.
Reactions: boju