At this point I don't know anymore what to try to further improve the cooling of this CPU... Furthermore, XTU doesn't show that it's thermal throttling since I switched to this 360mm AIO, but it does show a constant current/EDP throttling and idk how to solve that.

Since I dual boot Linux and Windows, I checked and the temperatures are a tiny bit better on Arch and Garuda, with the highest spike of 95 degrees, not a huge difference than Windows 11 anyway.
0

By default, that cpu has an infinite turbo limit and no time limit on turbo. Meaning it's free to suck up as much power as it needs, and slow down for next to no reason - if the cpu hits the throttle limit, it'll briefly drop in frequency, voltage, temperature, etc, and shoot right back up, continuing this over and over and over, until your tasks are done.
There's also an Alder Lake exclusive issue with uneven socket pressure on the cpu, which just complements the above and not helping. More info on that HERE.

How would I apply a power limit on an ASUS bios? Also, on my bios it says that the short boost has a window of "56" whatever it means idk, whether it's 56 seconds or something else
0

Is there not a Maximum Turbo Power limit and Processor Base Power limit? The motherboard manual should tell you.

Yes, the 56 is seconds... boost duration should be next to Max and Base Power.
1

Adaptive boost will always try to reach 100 degrees because otherwise it's just performance you lose.
You can disable that and still keep all the other turbo modes active if you want to.
Don't look at power and temps for something that you will never ever use in real work, if you touch 100 degrees on a stress test on anything you actually do you will have much lower temps.
https://www.intel.com/content/www/us/en/gaming/resources/how-intel-technologies-boost-cpu-performance.html

Phaaze88 said:
By default, that cpu has an infinite turbo limit and no time limit on turbo.
Click to expand...

No THE CPU is very much limited to 241W turbo and not to an infinite turbo, anything above that is not covered by intel.
The default of THE MOBO can very well be to juice the living daylights out of the CPU. 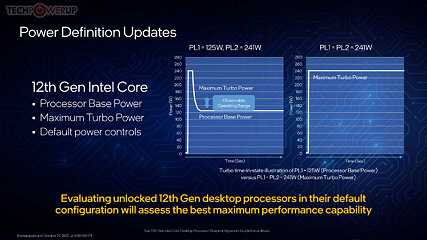 Intel recommends PL2 as max turbo, duration 56 seconds (Tau) after which the cpu should drop to PL1 indefinitely (PL1 is effectively TDP). So by default, you'd only see 240w for a minute, then 125w thereafter.

But motherboard vendors are notorious for ignoring Intel recommendations, doing so deliberately so they can advertise that their mobo is higher performance than the competition. They'll do so by changing the turbo parameters, the PL1, PL2, Tau limits in particular. You'll see that as Performance Mode or other such in Bios.

The MSI Godlike sets PL2 as 1000w, PL1 as 1000w and Tau as 999999 seconds, for instance. Effectively indefinite turbo run amok with as much power as the cpu and cooling can handle.