Here is a resource to help you judge if a CPU is a reasonable value: The gaming CPU hierarchy chart groups CPUs with similar performance.

Is there an editor working at TOM'S?
J

The E6600 is listed twice, I think it belongs where it is first listed.

Yeah, in a questionable choice they are testing the Threadrippers in Game Mode which disables half the cores... which I guess is ok for gaming. It is a gaming CPU list after all. Although, I'd kind of rather see a general performance list. I mean, sure, I game, but I don't spend ALL my time gaming.

I do think this performance list too heavily favors gaming. Either the title should be changed to denote that emphasis, or the hierarchy should be adjusted to fit a more balanced performance measure.
M

Actually, I quite disagree. First off, if you can, try just running Microsoft Office on some Pentium class hardware. A cheap laptop or a low end desktop. Then try running it on something like an i5. There is a world of difference there in responsiveness and quality of life. Even going to an i7 will give you a noticeable boost in some cases.

While most people will be able to get work done, or look at pictures, or watch videos, or do any other everyday task "just fine" on a Pentium machine, something like an i5 or Ryzen 5 would be a noticeable, and welcome, quality of life improvement. Even going between my various work computers and home computers I notice differences. Sometimes I use an i5 2500, sometimes a Xeon E5-1603 v3, and sometimes an i5 7300U, and my personal i7 7700HQ and i5 4590. I mean, these are all reasonable CPUs for office or every day use, but the difference in how they feel can be quite large. The i5 2500 just feels plain slow, the Xeon is perfectly acceptable, the 7300U is great until you hit it with something hard like 4k video, and the 7700HQ is fantastic for anything I throw at it, but matches up pretty closely to my desktop at home with the i5 4590 in benchmarks even though the 4590 feels slower. My wife's Phenom II x720 is perfectly fine for day to day things but she notices a difference when she uses my computer, and the x720 can still keep up with my Surface Pro 2 i5 4300U in several, but not all, tasks.

That is a decade worth of CPUs all across quite a range and I can say categorically that you notice a difference doing certain things, seemingly simple things. So, I completely and utterly disagree when anyone says that any CPU is "just fine" for standard office machines.

I think that there needs to be a hierarchy on general use. Or at least a guide of some kind. When someone at the store tells a consumer that the $350 laptop will be "just fine" for daily use, 95% of the time they are right, until that consumer tries to do something that exceeds the ability of their computer, or uses a computer that doesn't have crap tier hardware, then they feel ripped off because the sales person said it would be "just fine."

Even something as simple as a chart that lists tasks and recommends a class of CPUs for good results on certain tasks.


Something like that, but better researched, because there is a difference, and it can be huge on everyday tasks even between modern CPUs.

here are the price-performance charts based on this data 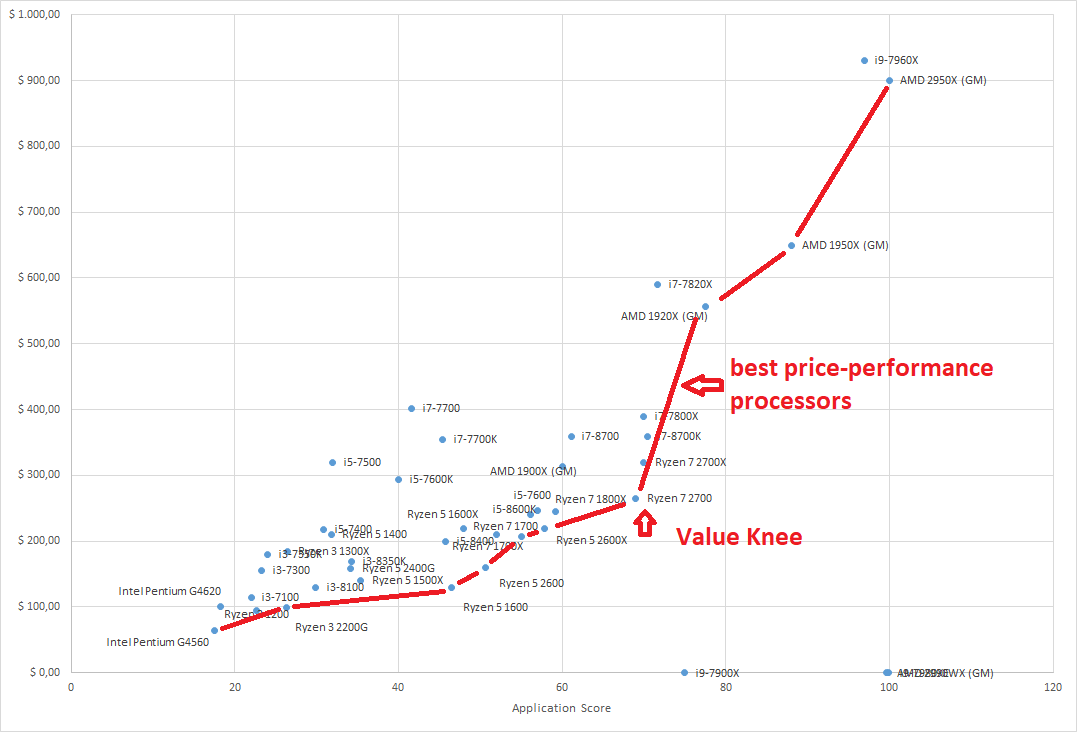 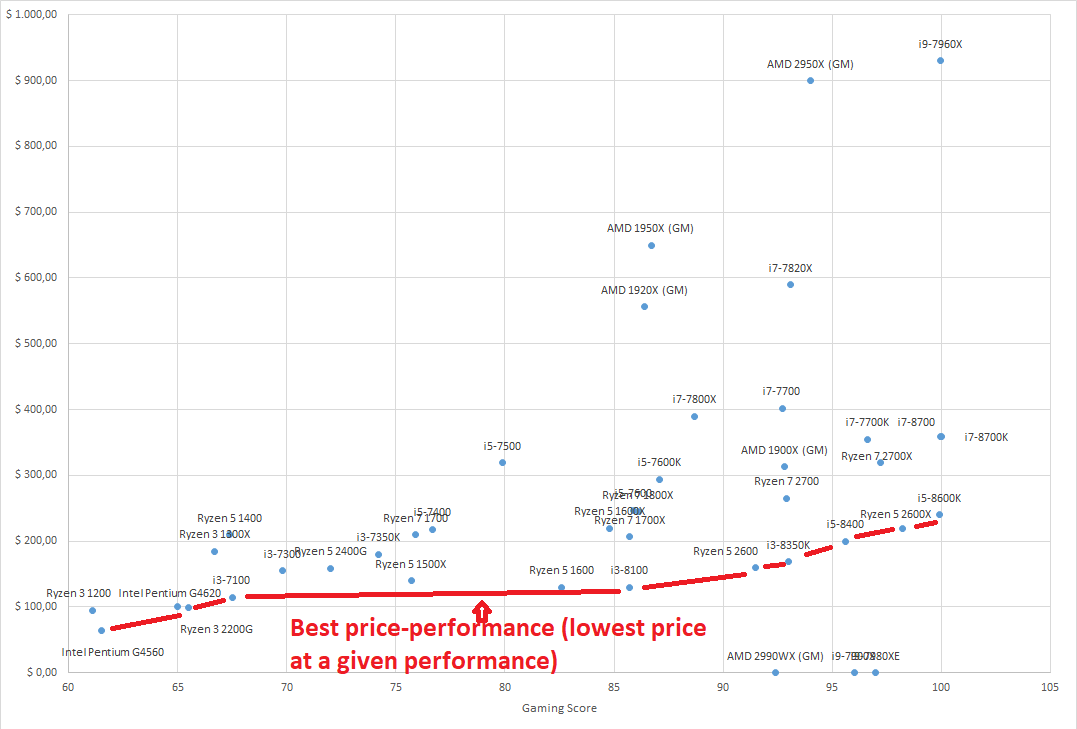 The Ryzen 5 2600 outperforms the 7700 in games as well apparently (despite the 7700 being faster in all benchmarks apart from Ashes), and the first gen Threadripper apparently games better than Ryzen 7 1800x?

In the bottom table, I spotted several other processors that are pretty much the same thing with different scores and places in the tier table as well. It gets really confusing since so many different tiers of chips are places in the same box (especially for the highest tier ranging from old quad cores to 32-core chips in same tier), yet the slowest Sandy Bridge i5s are apparently a higher tier than Kaby Lake Hypethreaded Pentiums, despite them performing similarly in multithreaded benchmarks and Pentiums performing significantly better in single threaded workloads.
G

This list is just too unpractical and tiring to look at.
L

I have to say the AMD Ryzen 7 3700 has left me quite happy both in my pocket and in speed and performance.

LWFG001 :
I have to say the AMD Ryzen 7 3700 has left me quite happy both in my pocket and in speed and performance.

Wait, how do you post from the future?
L 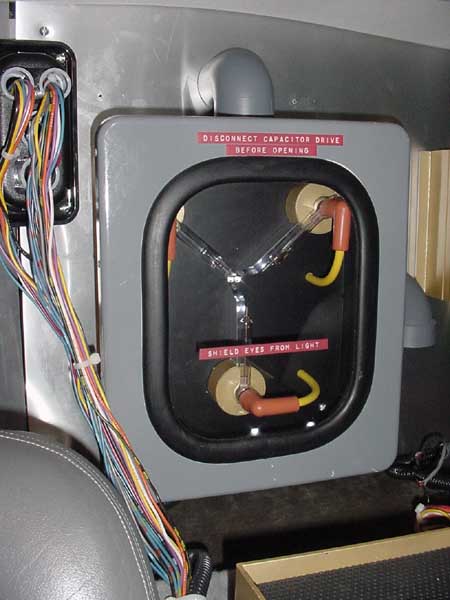 I can sell you mine for one hundred million dollars or can trade for a gravity drive that generates an artificial black hole to bridge two points in spacetime. Serious inquiries only.

justin.m.beauvais :
Wait, how do you post from the future?

so if I have an i5-2500K, there's no need to upgrade?...if I'm reading this correctly, I'd only be going up one tier? That seems difficult to believe.
J

does the word "tier" have multiple meanings in this chart?
J

Does the word "tier" have dual meaning in this chart?

justdenny :
Does the word "tier" have dual meaning in this chart?

Tom's claims that this is completely indicative of game performance, and most games aren't made to use more than 4 cores. So, all the fast quad or more core CPUs are in the same tier because in a lot of games an i5 9600K isn't going to be a lot faster than an i5 2500K... but this is in games that only use 2-4 cores.

Computing in general will be noticeably faster on the 9600K and games that can use more than 4 cores will be much faster as well.
N

According to this data, at December 11/2018, the only processors worth buying are: 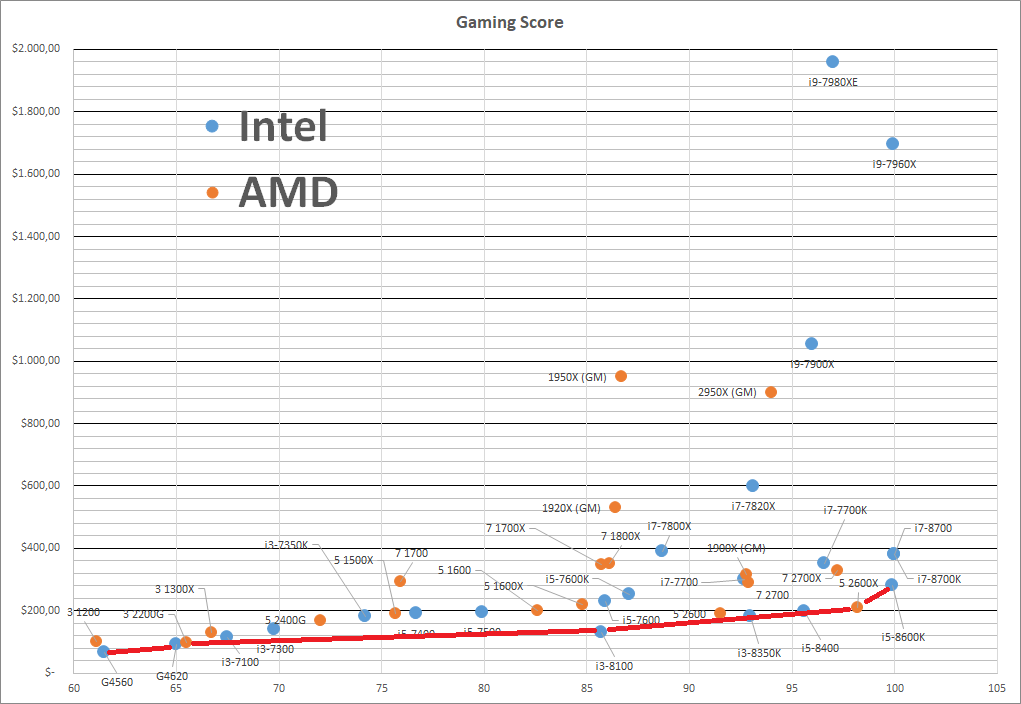 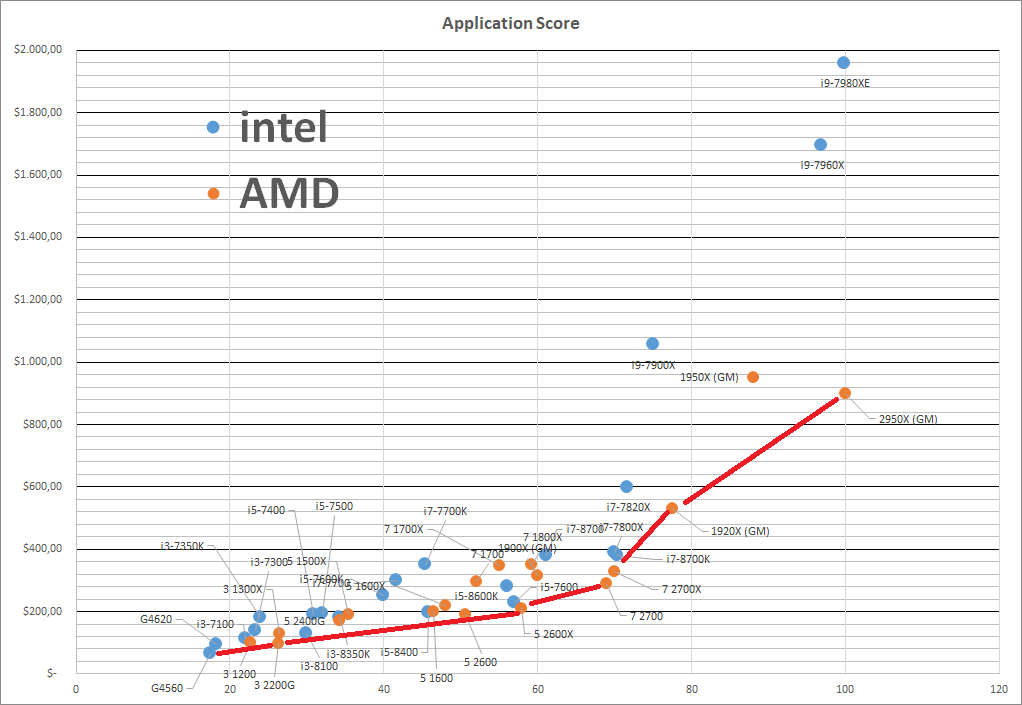 I wouldn't suggest to look at this table anymore. This shows different picture then what reality is.

There's a key caveat there on the gaming chart, which is that some games have become dependent on having four "real" cores. I'd be very cautious now of recommending an i3 for games, especially if some degree of future-resistance is a consideration. I suspect the charts also assume a "clean" system, doing little more than the measured task. With anti-virus, anti-malware, and other software in common use, I think of hyperthreading as little more than a stopgap or placeholder now.
You must log in or register to reply here.
Share:
Facebook Twitter Reddit Tumblr WhatsApp Email Link