Question Issue with missing icons on Taskbar and unable to restore ?

I'm running Windows 10 Professional (x64) Build 19043.1766(21h1) and recently my taskbar lost some icons. I'm missing the volume icon and also I've installed HW Info and I added the CPU temperature and the GPU temperature to the system tray. However, these icons are not displaying. I have my taskbar customized and put it on the side of the window and changed the background color and have pinned various apps to the taskbar like Notepad++, file explorer, system lock, settings, command prompt, different browsers, nord pass and nord VPN, etc.

I've tried a variety of fixes from suggestions I've found online. The icons are enabled to display in the taskbar. I've tried stopping and restarting explorer.exe. I've tried changing the display text from 100% to 125% and then back to 100%. I've also tried a registry setting change and rebooted and the keys were recreated after the reboot. I have a backup in case anything goes wrong, but I just deleted two keys which were recreated. Everything I've tried has not worked. The date and time show at the right side but the system tray that would normally have a small pop out no longer displays. All the other customized apps do appear on the task bar. Only the volume icon and the two HW Info temps that I added do not appear, but I see them in the taskbar settings for icons that appear and they are turned on, but don't display. I'm not sure what to try next. Any suggestions on how to get these icons back on the task bar? Is there a full reset I can do? I recall seeing a batch script that will reset the taskbar, but I wanted to see if there might be something I'm missing or another option before I try and run that. If anyone has some troubleshooting tips it would be appreciated. Thanks.
0

have you tried system file scan? It might mess up your customisations by replacing files, I am not sure. It might help with volume, probably not with hwinfo.

HWINFO - strange they don't show, I assume they aren't just in the overflow area? 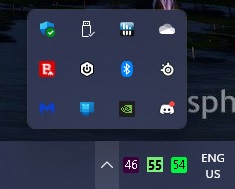 i too show them but the middle temp is my nvme drive. Are you sure they aren't just in the overflow? click the up arrow?
0
B

Thanks for the suggestion on scan now. I'll give that try. What is weird is that I no longer the arrow for the overflow on the task bar. I don't know how that disappeared? All I did when I customized was changed the location to the side of the window and changed the color.
0
B

Also, I was reading the following thread about a similar issue:

I tried running the batch script shown but I got an error that the process "ShellExperienceHost.exe" was not found.
0
B

Interestingly enough, the system tray has reappeared after continually trying a plethora of different steps to fix it. Not sure which fix was actually the one that resolved the issue, but it logged off and then logged back in and the tray reappeared with my volume icon and the HW Info items that I added to the system tray. Thanks for the recommendations. Glad it is at least back for now.
You must log in or register to reply here.
Share:
Facebook Twitter Reddit Tumblr WhatsApp Email Link