Maybe if the taxes on profits weren't so high, companies wouldn't try to evade them.
N

Politicians will always be politicians. You keep demanding more taxes while doing close to nothing.
P

[citation][nom]aicom[/nom]Maybe if the taxes on profits weren't so high, companies wouldn't try to evade them.[/citation]
Maybe if people actually paid the taxes instead of avoiding them, the taxes wouldnt be that high.
Z

so i looked at the main article and there is also no mention of apple which has to be the biggest offender here or at least they have the highest current growth rate of overseas $. but it's not illegal.. they should let the money in @ ~10% etc only if it directly increases employment...
C

Who is dumb enough to think that these companies wouldn't use the same tactics if the tax rates were lowered to 15%.
G

Dear god. Stop raising the taxes of the lower/middle classes! Fix loopholes and penalize companies for this kind of tax evasion, christ!
G

Microsoft and HP have profited handsomely from suckeling at uncle Sams tits, high tech tax breaks and H-1B visas to name a few! Microsoft for one, if found guilty, should be forced to rewrite the Visual Studio 2012 GUI to look more like the Visual Studio 2010 and previous editions of the IDE! Humans and their ancestors developed color perception over the eons to better differentiate the lush green forest from the tiger that is about to pounce and devour, should the ability to make out color be diminished in any way! Now Microsoft wants to make everyone color blind! Microsoft what do you and your “style mavens” know that evolution and the rest of us do not!

well, they were paying taxes at the lower rate before 2009, it seems. Now, the gov't isn't getting as much as it would have with a lower rate. But at 35% (Are you freaking serious!?!?), I'd be finding ways to keep my money, too. that's
S

It's scummy, a lot of companies are doing it, and it is wrong. I know lots of people that would do the same if they can recover a lot of money on their taxes. However, even they would acknowledged that they are being scumbags in the situation. I don't blame them though
[citation][nom]article[/nom]William Sample, if this office was established merely to cut its tax bill. Sample confirmed with a "yes, that is correct."[/citation]I'm quite impressed by the straightforward honesty answering that question

And nothing happened to the worst offender, Apple... *rolleyes*
B

[citation][nom]Pennanen[/nom]Maybe if people actually paid the taxes instead of avoiding them, the taxes wouldnt be that high.[/citation]

Do you seriously think the government would lower taxes because they are getting to much from one source?
K

i see some single family survive on net income of less than 22,000 a year (and support at least 1 kid). and they pay their taxes.

[citation][nom]TeholTheTaxed[/nom]Dear god. Stop raising the taxes of the lower/middle classes! Fix loopholes and penalize companies for this kind of tax evasion, christ![/citation]

Funny how if a average joe were to do this they would be arrested for tax evasion, but if the big corporations do it? It's business as usual.
C

Tax avoidance is not illegal. Many financial and tax consultants make their living offering advice on how to legally minimize tax payments. If there are loopholes, they will find them and use them. Anything for that additional quick buck.
K

Hey as long as our laws permit it companies and folks like Mitt Romney will go offshore to shelter themselves from taxes, or hell Eduardo Saverin renounced his US Citizenship before Facebook went public to avoid windfall taxes. Ever look at where your US based CPU (Intel or AMD) is manufactured??

Wealthy companies and individuals control these laws and seem to be fine and dandy raping the rest of the folks. You're the dumb-asses who put these folks in office! The only folks that are legitimately Republican are those who earn over $1M, otherwise you're kidding yourself.

China pays its' way into the WTO and while they're allowed by the few to screw you for profits.

The problem is we're all (remainder of the modern world; those folks = you) about tapped-out and broke.

So what do we do, we ague & fight over nothing while 'these' folks LOL at you and level-shift the arguments over further exploitation and pit the '99%' against each other. The system is broke: morally, financially, corruption -- you name it.
A

There's always free riders on the system. The sometimes fun part is kicking them off.

The often times tough part is fighting off their army of lawyers and lobbyists.
K

Both Republicans and Democrats senators and representatives have created these loopholes to benefit their "friends". Not only Microsoft and HP, but Boeing (Maria Cantwell-D WA), GM, Ford, Toyota, General Dynamics, and on and on in order to lower unemployment in their state as well as increase tax rolls from middle and upper middle class--while at the same time lowering corporate hurdles to initiate business within their state.
If anything, you should be blaming the senators that line their pockets or job once their senatorial role is done.

@kyee7k - you're confusing Federal with State, and most of the 'Welfare States' (States who take more Federal taxes IN than the pay OUT) are Republican; see below.

The 'problem' is millions of folks have shifted (left) to lower tax brackets, well when the Income goes down but the Expenses go up you run into a Deficit. Since the last Busch tanked the global economy at least Obama had a illegitimate reason for a Deficit (recovery, starvation and needless real suffering).

The problem is Republican's want to shift the burden to the Middle and Lower Classes. However, rich folks haven't yet figured-out without a Middle Class no one can afford their 'stuff' so they seek out a Global Market, but the Global Market works the same as ours (US) and there's a Global Recession (by Definition it's actually a Depression) but calling it 'that' would really freeze purchasing... 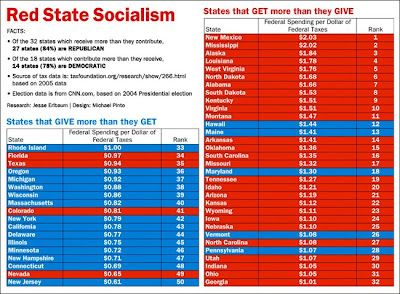 Oddly, Republican's are a LOT more Socialist, it's funnier than hell to me. Even California pulls it's weight!!!
A

[citation][nom]kcorp2003[/nom]i see some single family survive on net income of less than 22,000 a year (and support at least 1 kid). and they pay their taxes.[/citation]
No you don't. The only real taxes they pay are sales taxes(and in some states not even that). I employed a single mother of two children. She made 25k a year. She received foodstamps at about 300 a month(3600 a year), received a net tax refund from both state and federal of 14k(thats right child tax credit, state income tax, homesteaders refund inKS)..in other words while she may have paid about 3k in taxes for the year(Medicare, SSI) her overall income from federal benefits put her solidly into middle class at 39k a year. I am not saying its wrong to help but its a bad argument to make. Just like idiots claiming we raise the taxes on the lower and middle classes..umm no. Neither one of those have seen a tax increase since at least Bill Clintons first term.
D

Virtually every company does this. Not just "international" ones either. You might be surprised at some relatively small companies, some that don't even have operations in different regions of the same state, but use some of these same tactics. Anyone who thinks that decreasing their tax rate will make a difference is... very optimistic. They are always looking for more profit. Their tax rate could be 0% and that wouldn't be enough. They'll start looking for ways to get the government to give them more money, or like you see in many cities already, pay them incentives and complete projects on their behalf. I get the argument that the tax burden can't be too high, but you're fooling yourself if you're asking them to tell you what they'd be comfortable with, because in three months or less they'll be asking for it to go even lower. Make the best decision you can and enforce your laws. Make adjustments on that same focus. That's the only way to go. Playing this game of "are you happy with this lower rate" isn't going to work, because they'll always want one that's even lower. ALWAYS!