I've been having this nasty issue for about 1 month now. Everything was running perfectly fine before that. Haven't changed anything before the issues started.
I start a game, goes to menu all fine, load the save, game starts and 2-3 secs after that I get a rig restart. Goes back to Win, no error message or anything that might indicate what happened or that something might be wrong. Start the game again, load the save, 2-3 sec in, crashes and restarts again. Same cycle again, load the game the 3rd time and everything works fine, no problems at all. Can run the game for however long I please.

I've checked the temps on the CPU and GPU, all good. CPU max 49C, GPU max 81C.
I've scoured the web for similar problems but haven't found anything like what I'm having. Maybe someone can help.
I'm thinking the PSU but that doesn't explain why it always crashes 2 times and then it's fine the 3rd. I've even tried to circumvent that and restart the PC manually after the 1st crash, 2 times even, but it will still need to crash another 1 time in order for the 3rd to work.

Turn off automatic restart on system failure. Next time instead of reboot you'll get BSOD with info about problem, that caused it. 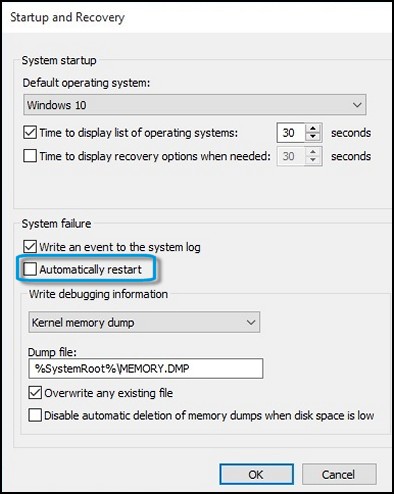 Thank you SkyNet. I will try that and see if I get any info next time.
0
E

So I've disabled the "automatic restart" on crash but it still won't show a BSOD or any kind of error when the game crashes and the rig restarts.
0
E

Alright so I did some more testing and after installing this stress testing software OCCT it appears that the problem is triggered by stressing the GPU. SO i did that a few times and it crashed every time.

So I'm thinking that my GPU is busted. Luckily, I just bought another MSI GTX970 a few days ago and decided to install that and see if the problem still persists. Nicely enough, the problem went away... temporarily.

I install the old GPU back in to make sure it really is that and guess what, no more problems with that either.

So now I'm very confused as I don't understand what's going on and why these problems work like this. The difference between working and not is that if I start getting the problem, which has become persistent now (once I get it, it will keep happening continuously until I turn OFF the PC), is that if I turn OFF the PC for a few minutes and let it rest, once I start it back up the problem is gone.

What I'm going to do now is leave the new card in and test that over the next few days and see if I get the problems again. If that's the case, then I know the old GTX is on it's way out. If not, then it's most likely the PSU, as I've just upgraded to Win 10 1909 and I seriously doubt the problems will persist (although I'm not completely sure Win 10 is not the culprit as Microsoft has begun to cause more problems than it solves with their stupid updates).
0
D

I’ve just put up a similar thread, I’ve the gtx 970 and I’m sure it started after I went back to windows 10. Really can’t put my finger on it but I only get one restart not two 😂
0
D