[SOLVED] CPU gets stuck at 0.2GHz randomly or ONLY after not using the computer for a couple of minutes

This problem has been nagging me ever since I got this computer: Lenovo X1 Carbon 5th Gen. I've scoured google and countless forums to no end, but I still don't know why this is happening.

I have a problem with this computer and it is that if I don't use the computer(like just leaving it idle) for anywhere from 30 seconds to 5 minutes, the CPU(Intel Core-i5 7300U) speed suddenly drops all the way down to 0.2GHz as I've seen in task manager. Of course, when I try using the computer after it's reached this state, things are at a horrible crawl. It takes it almost a full minute to finally realize I'm telling it to do something, and then the CPU speed suddenly jumps up to 3.5GHz(the turbo speed) and everything starts working again. I've checked in throttlestop and there is nothing preventing the CPU from working at all times, since the CPU is fine when I'm using the computer normally. The temperatures are normal and in the windows 10 power management settings, I have the CPU at 100% utilization even when idle, so it isn't the power plan.

I find this issue incredibly weird since my dad also has an X1 Carbon 5th gen and he never has this issue. Also, this doesn't just happen after I leave the computer idle for a few minutes, it also happens randomly in the middle of me using the computer as well. Sometimes, it happens once a day where it goes down to that slow speed, and by the time I've realized it, I start spamming Ctrl Alt Delete to make the computer do something so the CPU speeds back up.

Unfortunately, any time it DOES slow down while I'm doing work, it also causes audio to stop functioning entirely as well. I use an audio interface with my computer, and whenever this happens, I have to go to the control panel sounds window and change some setting, any setting in my main outputs and audio works again.

It's really strange how some days, it slows down only once when I'm in the middle of working, but other days, this can happen every 2 or 3 minutes, which is really frustrating since when it happens, EVERYTHING just crawls to a halt and the system pretty much doesn't respond to any input whatsoever until the cpu speeds back up.

I'm at a total loss as to why this is happening. If anyone can help, please do so. Thanks.
0
M

you might want to check your power management profile in control panel rather than in bios.
0
F

What are your exact CPU temps? It might be thermal throttling, but you just don't realize it because it SEEMS reasonable. There's no evidence, but that would obviously be a first step. The next thing to do is to go into power settings and set it to optimal power, so it prevents that much change in turboing. I'm not sure if your laptop does have a BIOS, but if it does, unlock the temperature and power targets, then run it again.
0
S

Shut off any power saving or speedstep options in the bios. Force it to run 100% all the time in windows too. If it still does this, boot a parted magic live cd/usb and see if the cpu still dips there. If so, then it's probably a hardware issue of some sort.

I would also check your memory to see if it is seated properly. Won't hurt to reseat it in case it makes the problem go away.
0

Thing is, this is a laptop. It's a lenovo one, so the bios doesn't have any speedstep or any other type of useful configuration. Power saving is also off, and the temps are anywhere from 38C to 58C, which I think is quite normal for a CPU. Oddly enough, when I'm gaming and the temps go up to around 70 C, the CPU doesn't slow down at all, and stays at the boost clock consistently without any issues, which is what I find really weird about this issue. I'll take a look at the BIOS one more time and see if there's anything buried in there about CPU power saving or speed control.
0
S

If it is a laptop it most certainly has some sort of speed/power controls in the bios, especially lenovo. Keep checking.
0

Turns out, I was just looking in the wrong spot in the bios! Both Speedstep and CPU power management were turned on, so I turned them off. I hope that it fixes the issue, so I'll update the post in a few days if it did really fix it.
Speedstep: 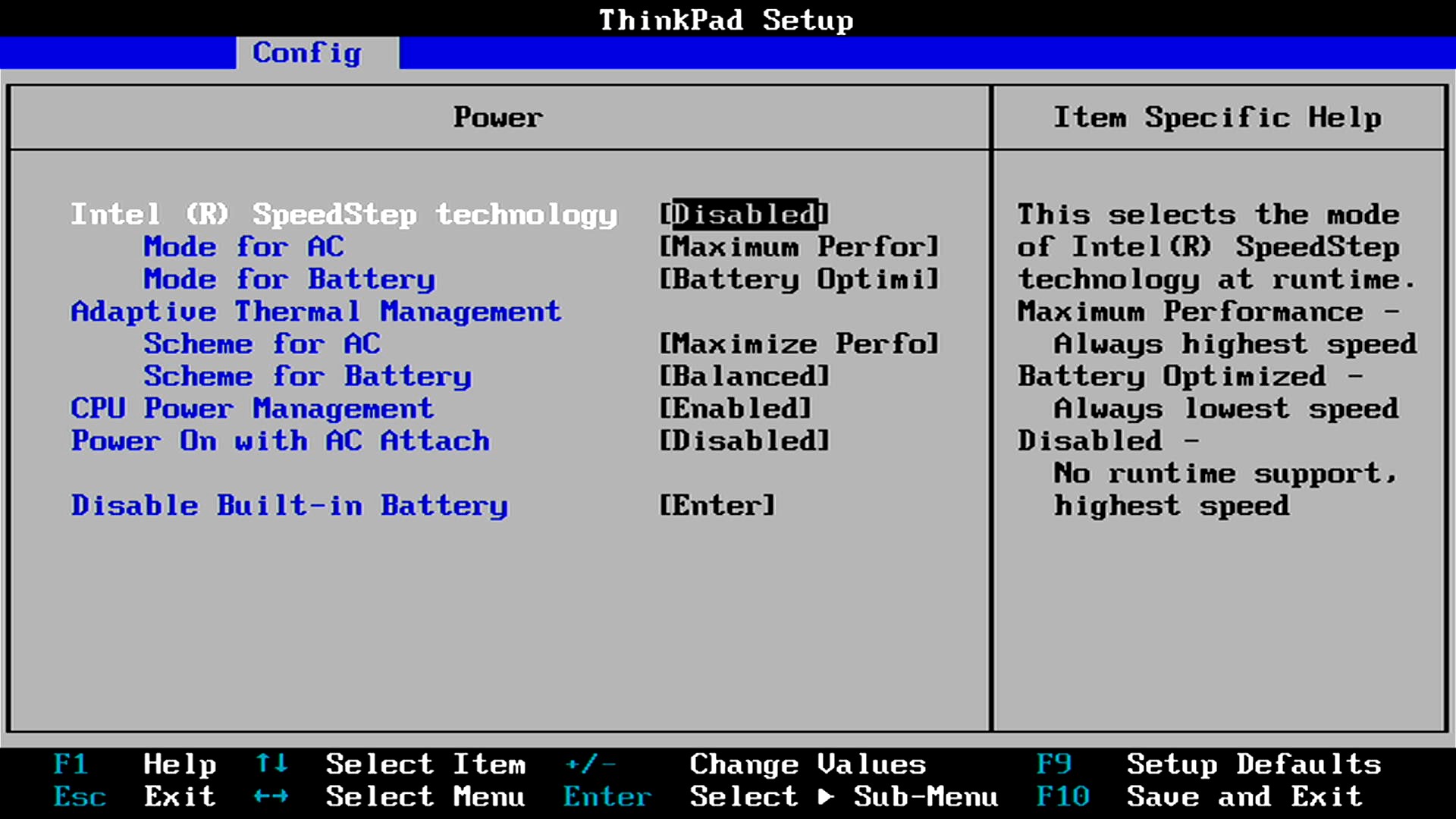 Power Management: (I turned it off after this screengrab) 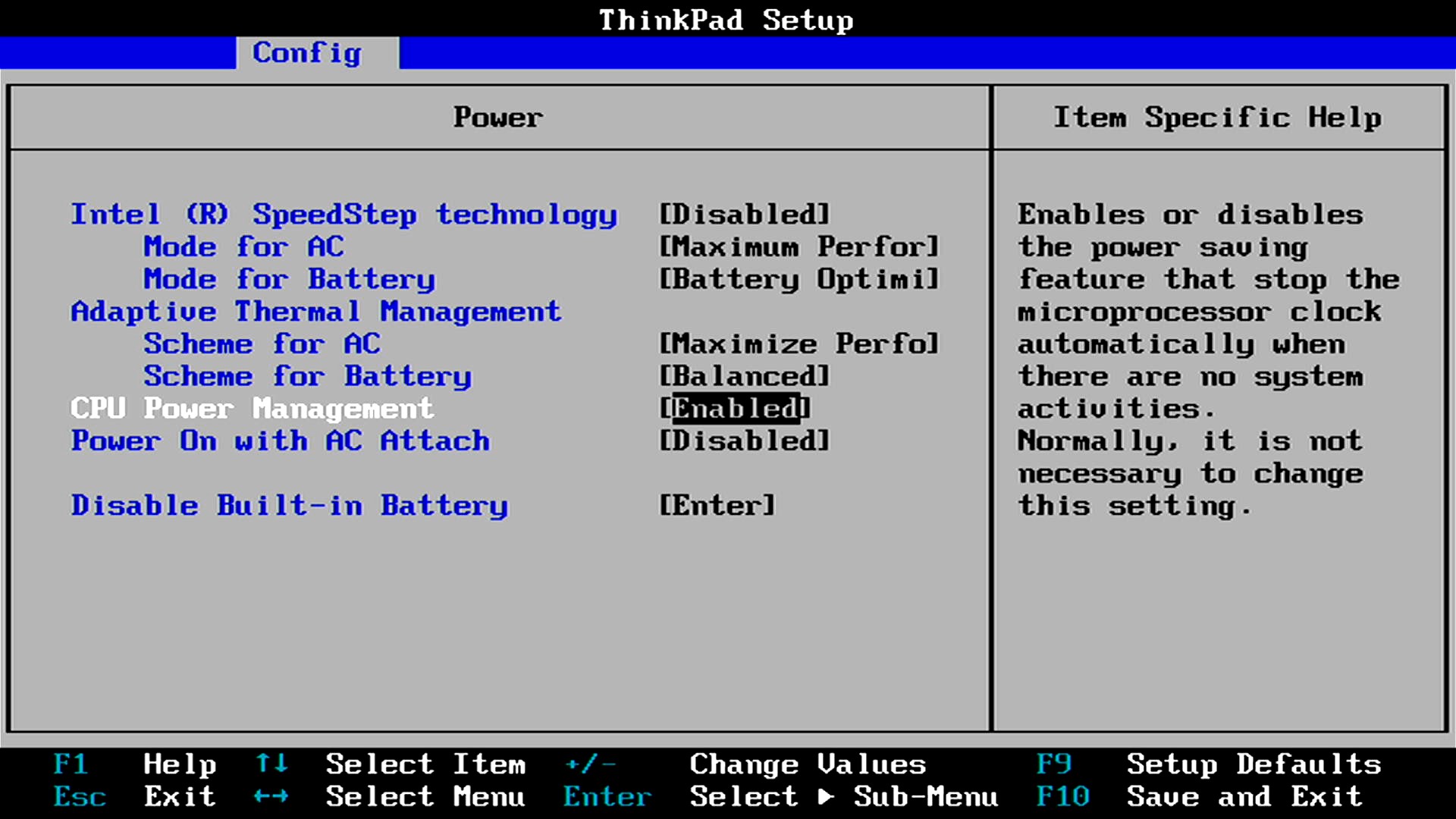 Goody. I hope this solves the issue and if it does, please post and let me know!
1

Download ThrottleStop, click on the TPL button and make sure that Speed Shift is enabled. This is how modern processors control their speed. Speed Shift replaced SpeedStep. During the change over from SpeedStep to Speed Shift, some manufacturers did not enable this properly.

Once enabled, you can go to the Speed Shift EPP setting on the main screen and change EPP from 0 to 255 to control your CPU speed. A setting of 0 is for maximum CPU speed regardless of load. An EPP setting of 128 is more of a balanced profile.

If you ever have a problem with your CPU being stuck at a low speed, post a screenshot of ThrottleStop while this is happening. Include the Limit Reasons window in your screenshot and I will tell you how to solve this problem.

When properly setup, Speed Shift gives you full control over your CPU speed. 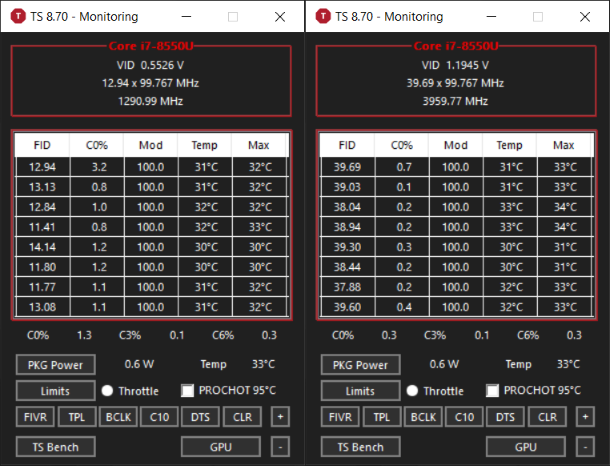 Unfortunately, it seems like changing the settings in the bios did nothing, since after I left my computer for a bit with task manager running and came back, I was greeted with this:

So it seems like the CPU is STILL slowing down to that atrocious speed when I don't use the computer, even with power management AND speedstep turned off in the bios. I will download throttlestop and try to get a screenshot when the computer does this again so hopefully it can provide more information.
0

Remember to turn SpeedStep and Power Management back on in the BIOS.

Post screenshots of the various ThrottleStop windows. The more info the better.
0
M