So I purchased a Samsung HW-T410 Soundbar and wanted to utilize it on my PC. Unfortunately, I didn't realize this sucker only has a USB port that only reads files, Bluetooth, and S/PDIF port. Well the average PC doesn't have S/PDIF ports and that's the situation I'm in.
I just bought the Sonos Optical to HDMI adapter to plug the HDMI end into the Motherboard of my MSI B450 Tomahawk and I selected the proper output method on the soundbar and there's no audio no is there any sort of recognition on Windows 10 that there is a new audio source. I even plugged into the HDMI of the my GPU and it didn't do anything. The built in sound on my monitor works fine though. I believe I have all my drivers updated but I'm not sure if the S/PDIF to HDMI adaptor was total FLOP of an idea.

CRodrig57 said:
Well the average PC doesn't have S/PDIF ports and that's the situation I'm in.
Click to expand...

really? I am not saying yours doesn't but it depends on features of the motherboard as to whether it has more sound options. Most boards that support 5.1 or higher probably have spdif - I know mine does... but anyway

what software are you using on windows to control audio output?

win 10 won't see it as an audio source, its an output device? it should show in this list 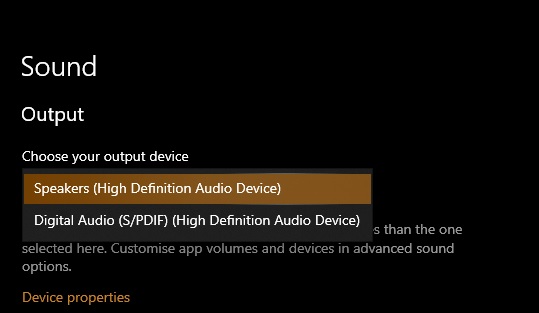 i should also have NVIDIA HDMI audio there but I don't have speakers on monitor so don't use drivers.

Simple fix is to get a sound card with an optical output instead of that adapter. https://www.amazon.com/ASUS-XONAR-SE-Channel-Compatibility/dp/B07HCX1NY9/ref=psdc_284823_t1_B00EO6X4XG?th=1

Those are the cheaper ones, if you want a good quality one and OK with spending more https://www.amazon.com/FiiO-Wireless-Bluetooth-Transmitter-Headphone/dp/B08LM68KN8/ref=sr_1_16?dchild=1&keywords=fiio&qid=1608771580&sr=8-16 USB DAC will replace your soundcard so everything gets connected to that.

FiiO K3 has a ton of outputs plus a headphone out / amp https://www.amazon.com/FiiO-Headphone-Amplifier-Computer-Balanced/dp/B07KR3RF4H If you use your PC with headphones, I would recommend this one, nothing really has the same connections and quality for the price.
You must log in or register to reply here.
Share:
Facebook Twitter Reddit Tumblr WhatsApp Email Link