YAY. The people who don't(usually) know fudge-all about aerodynamics.
/facepalm

Yeah, that's why I said 90% of those who work in editorial, because about ten percent of them are actually knowledgeable.

Re-modified the front panel on my Define S. Originally, it looked like this, but I was never happy with it after the first version was done because the union jack perforated metal sheet just didn't look right once it was painted. 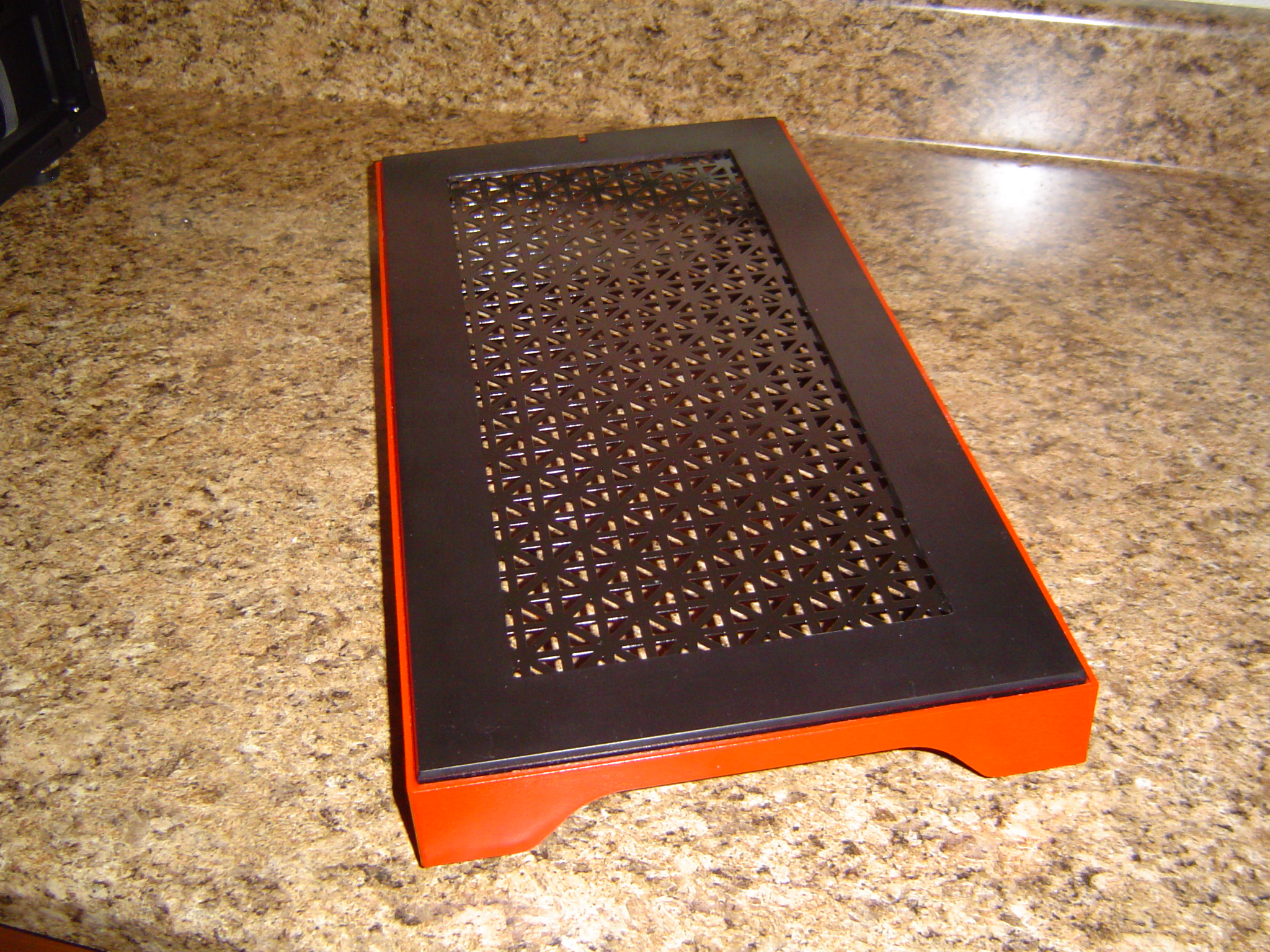 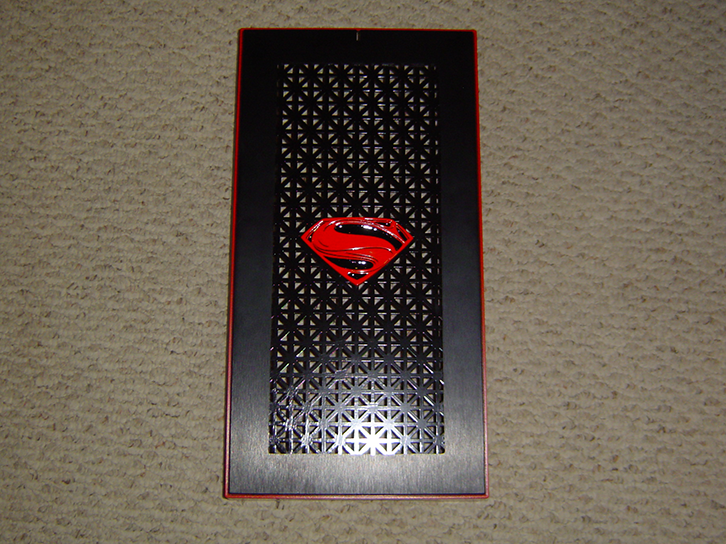 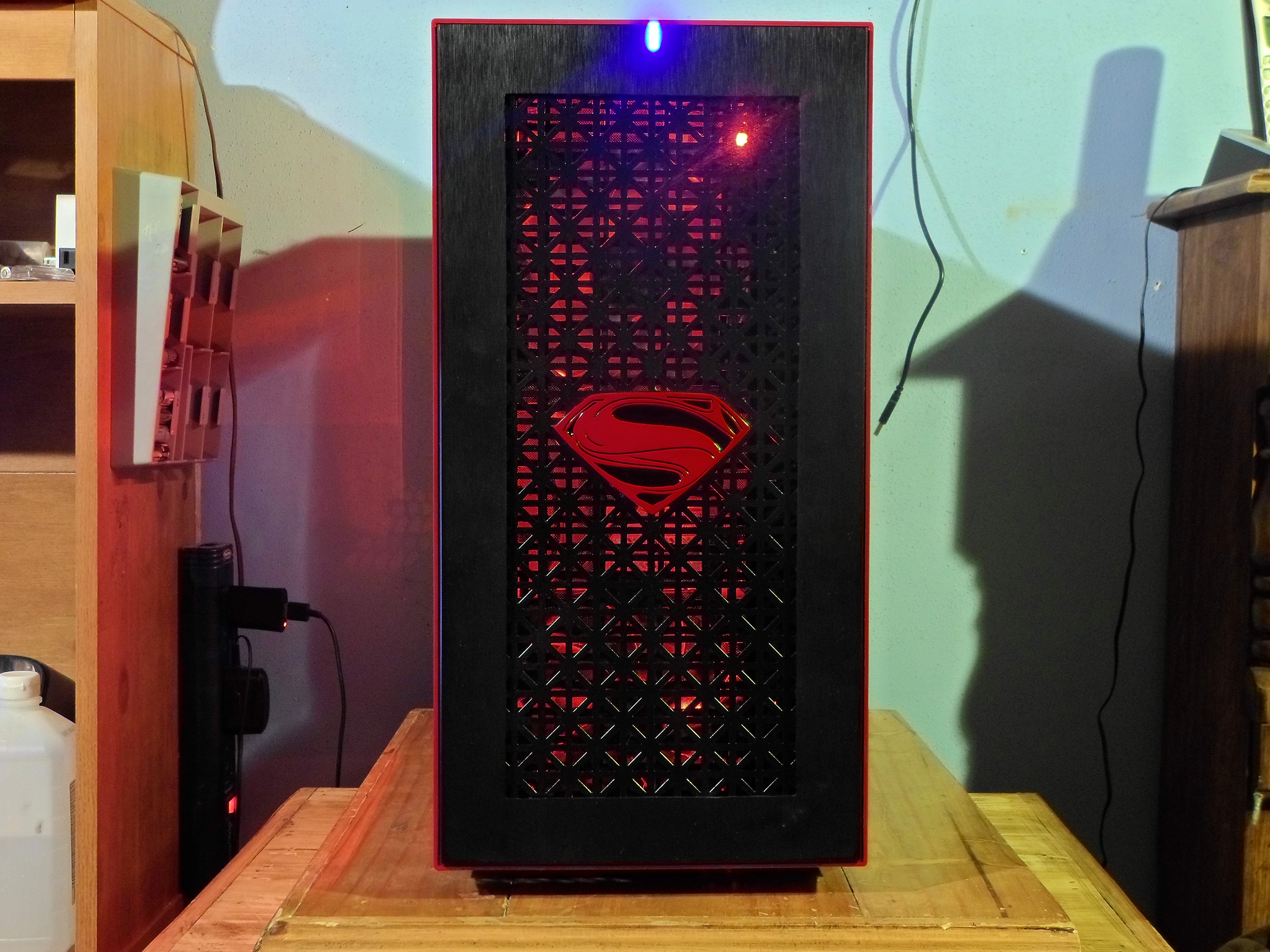 I also INCREASED the mesh area, in addition to changing to a more traditional "mod mesh" type perforated metal. Much happier, but still deciding if I'm going to put the S emblem back on or go a different direction. 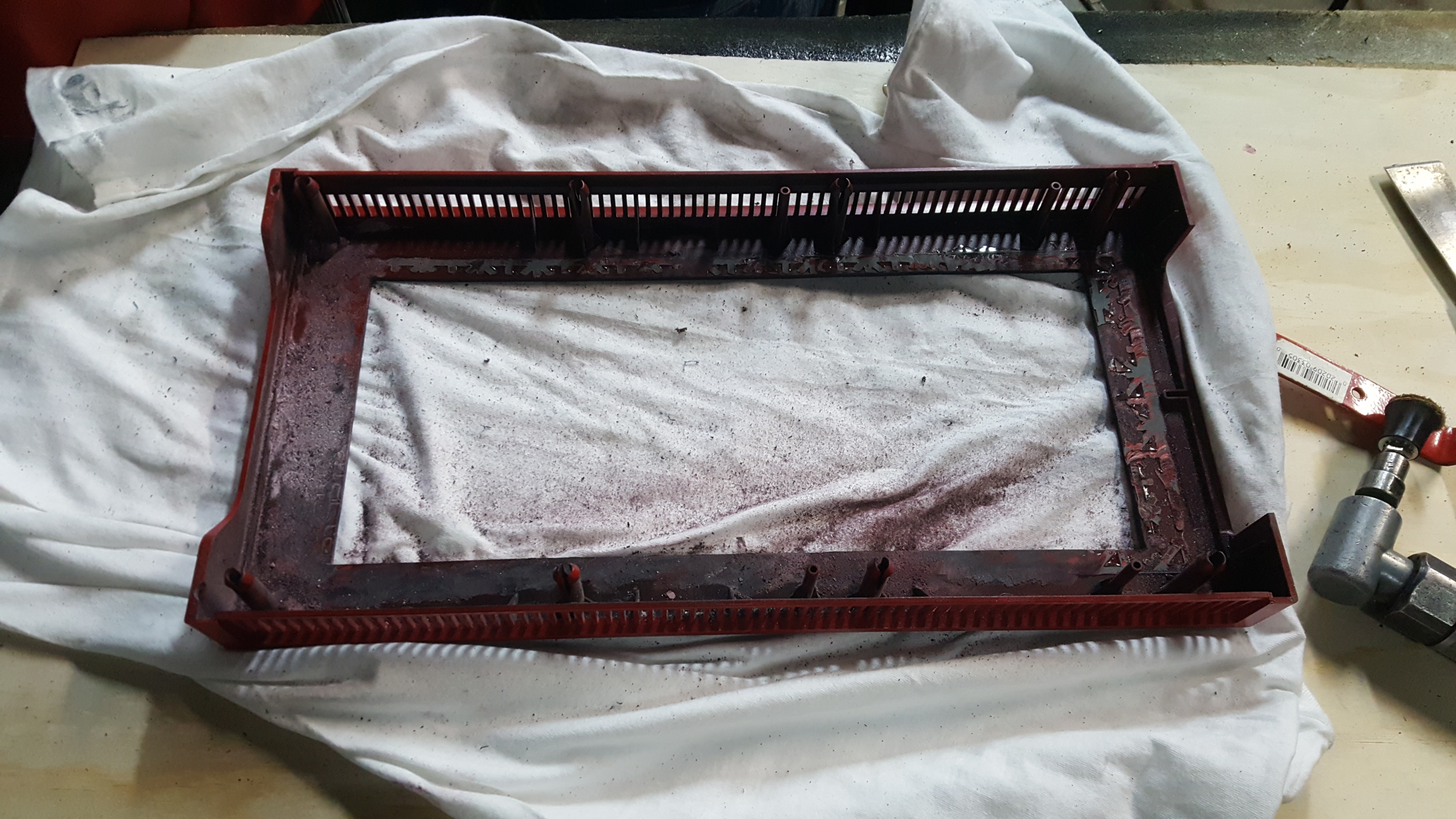 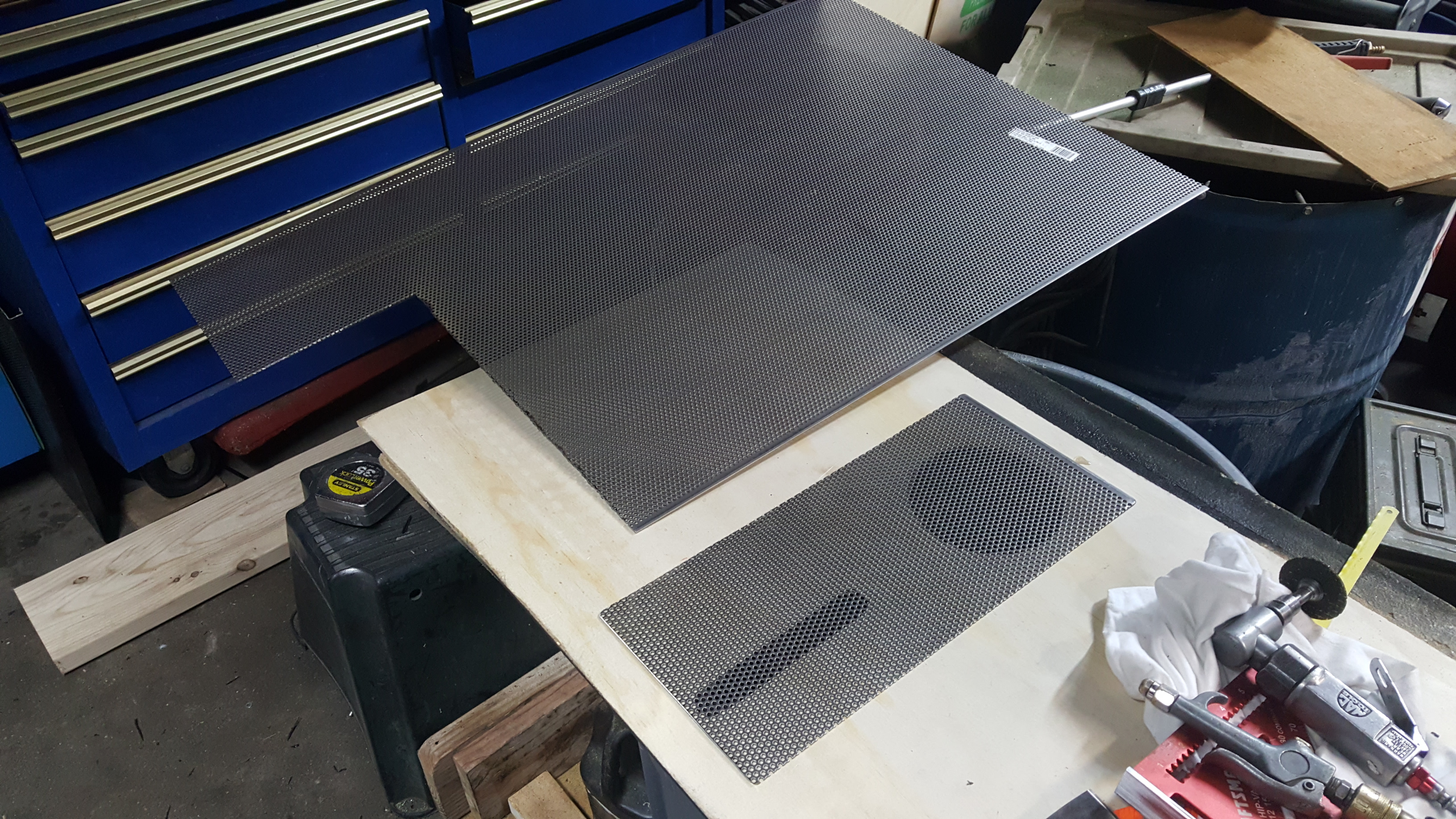 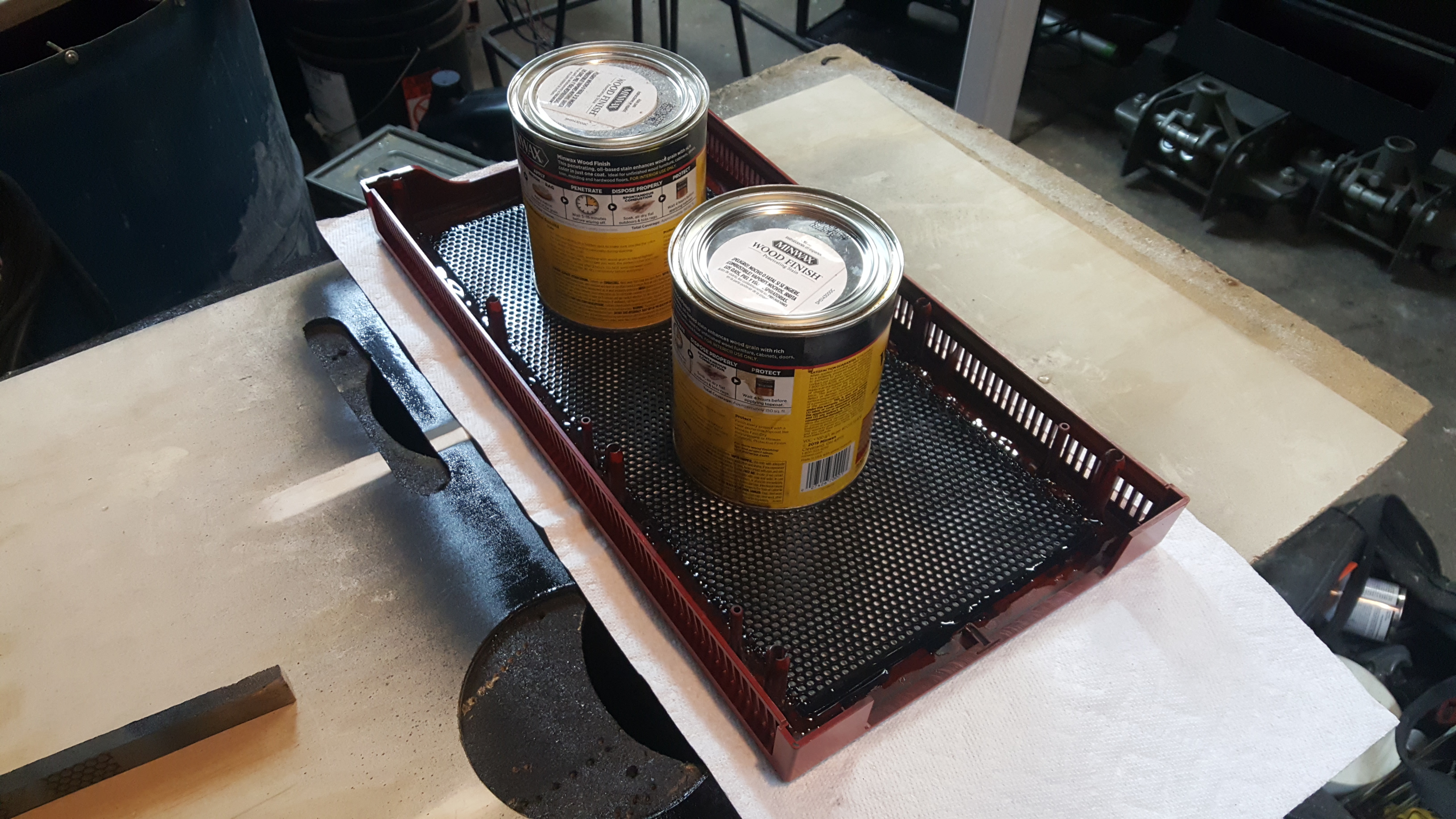 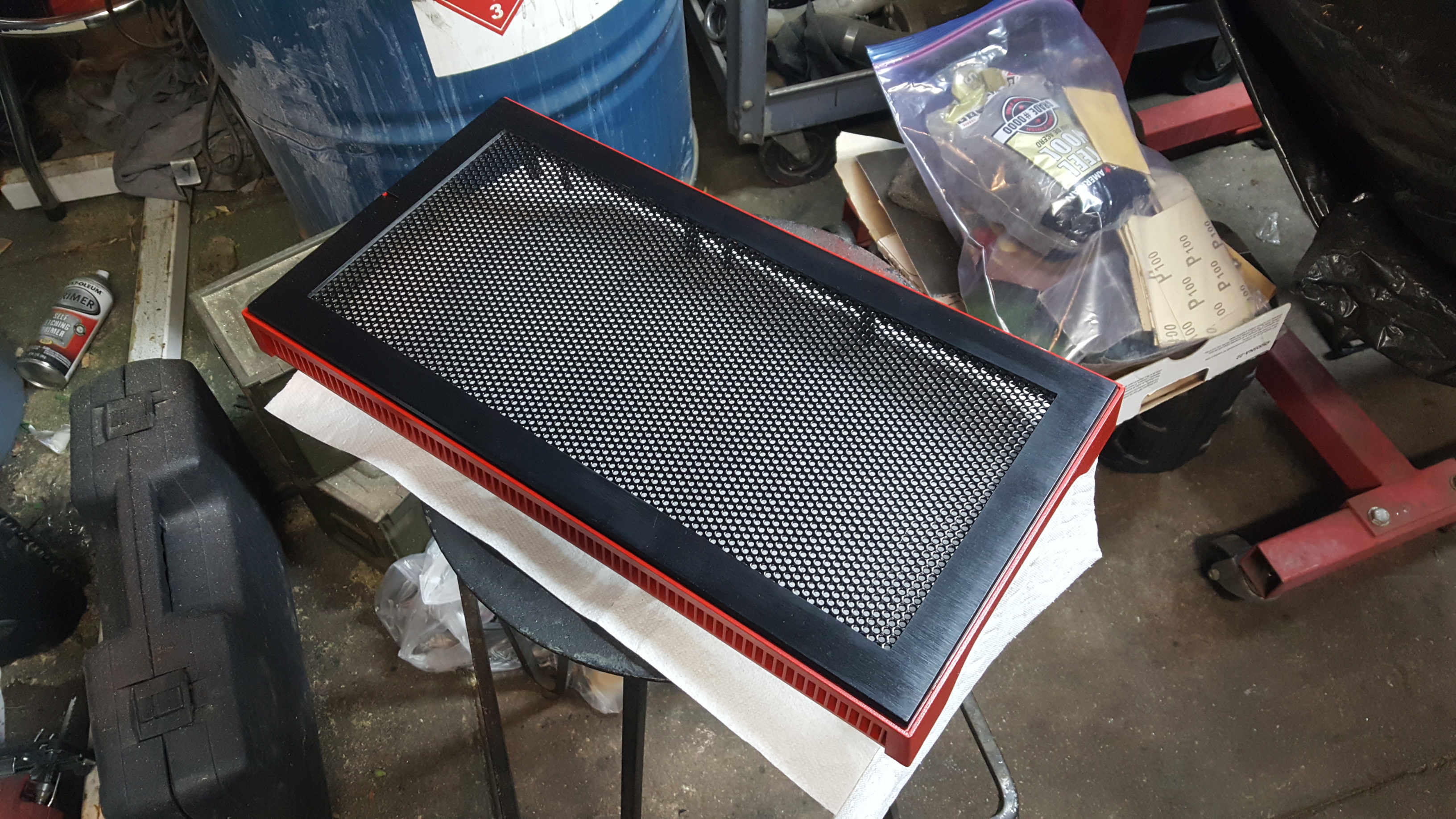 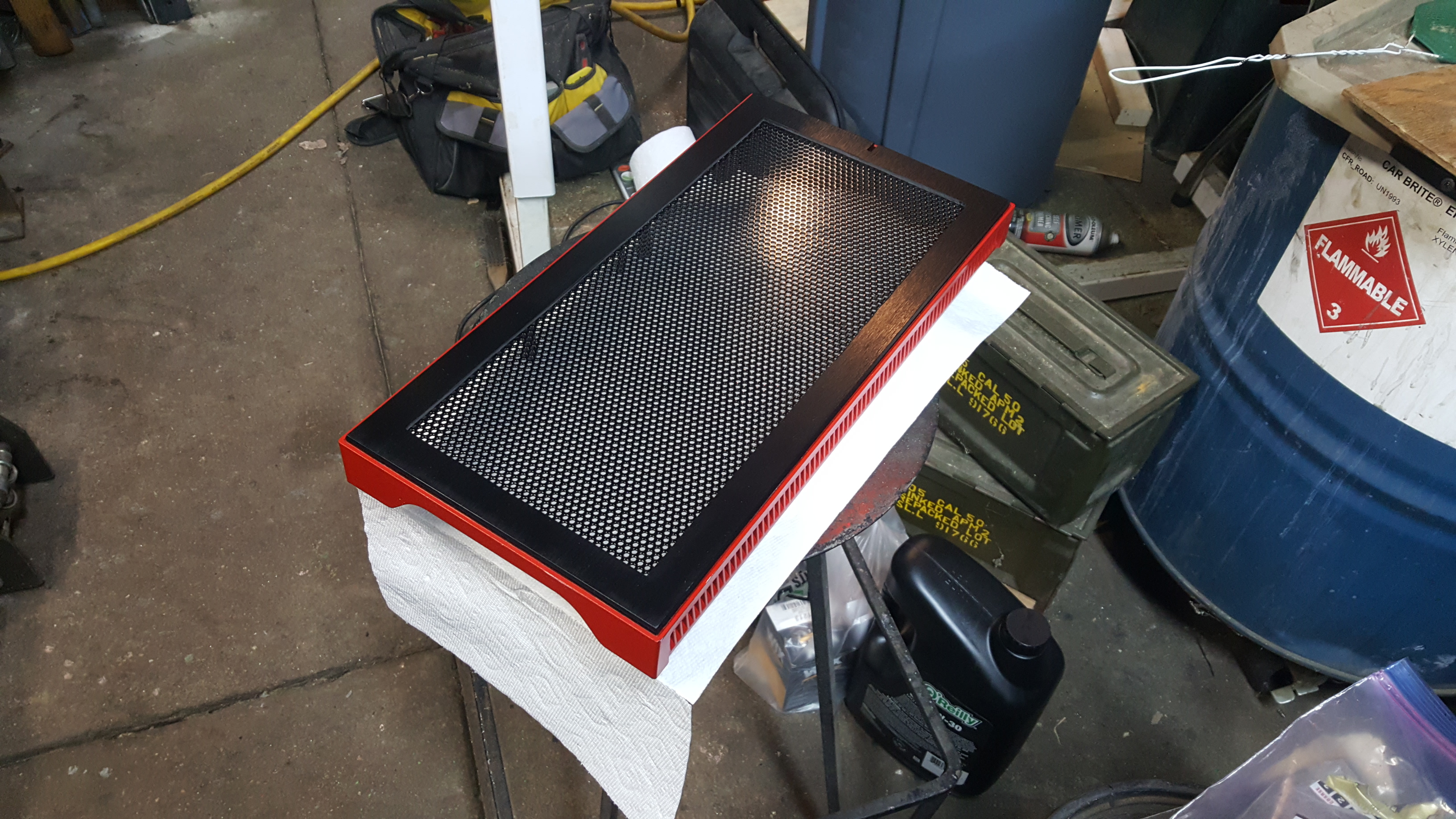 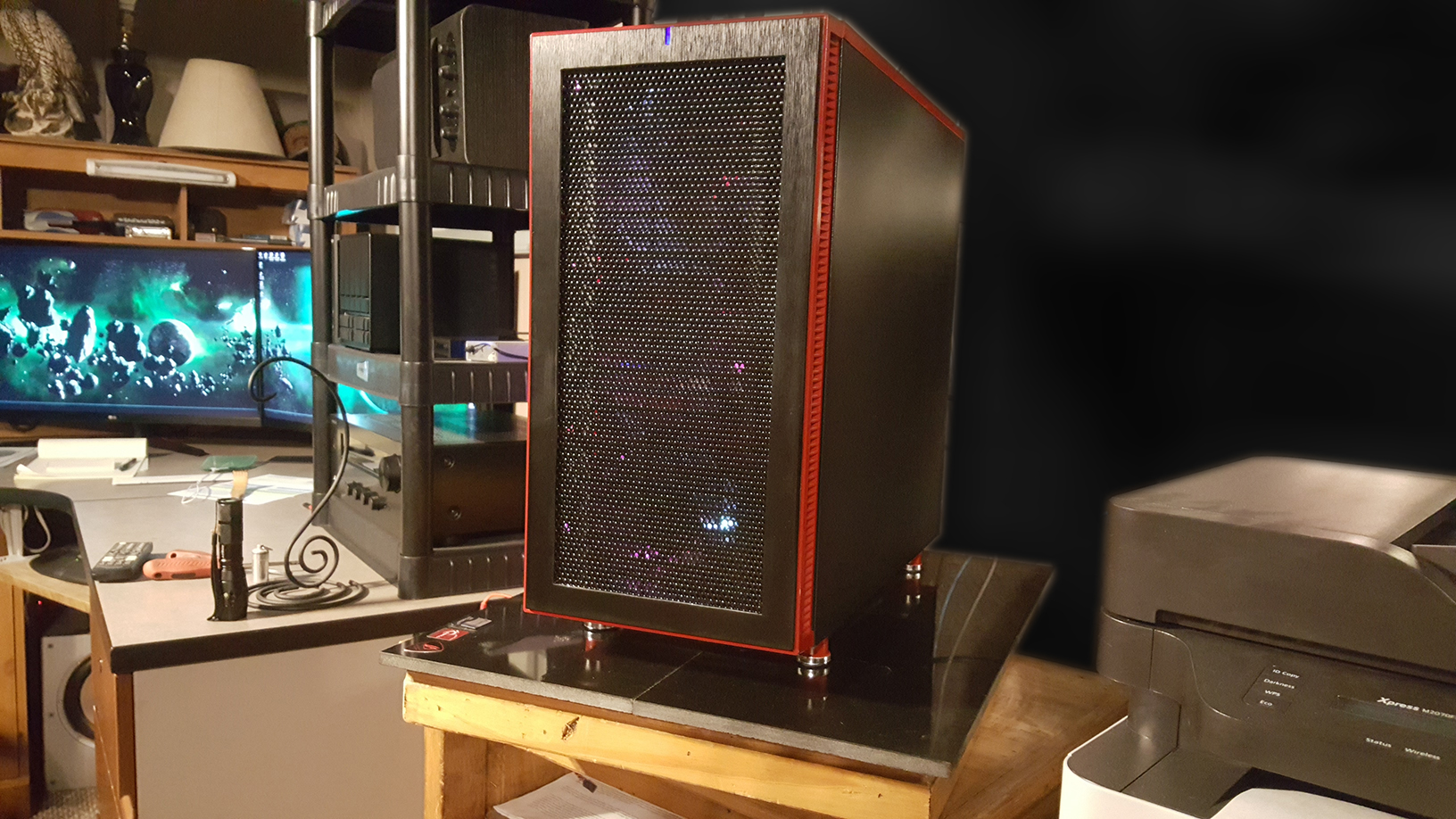 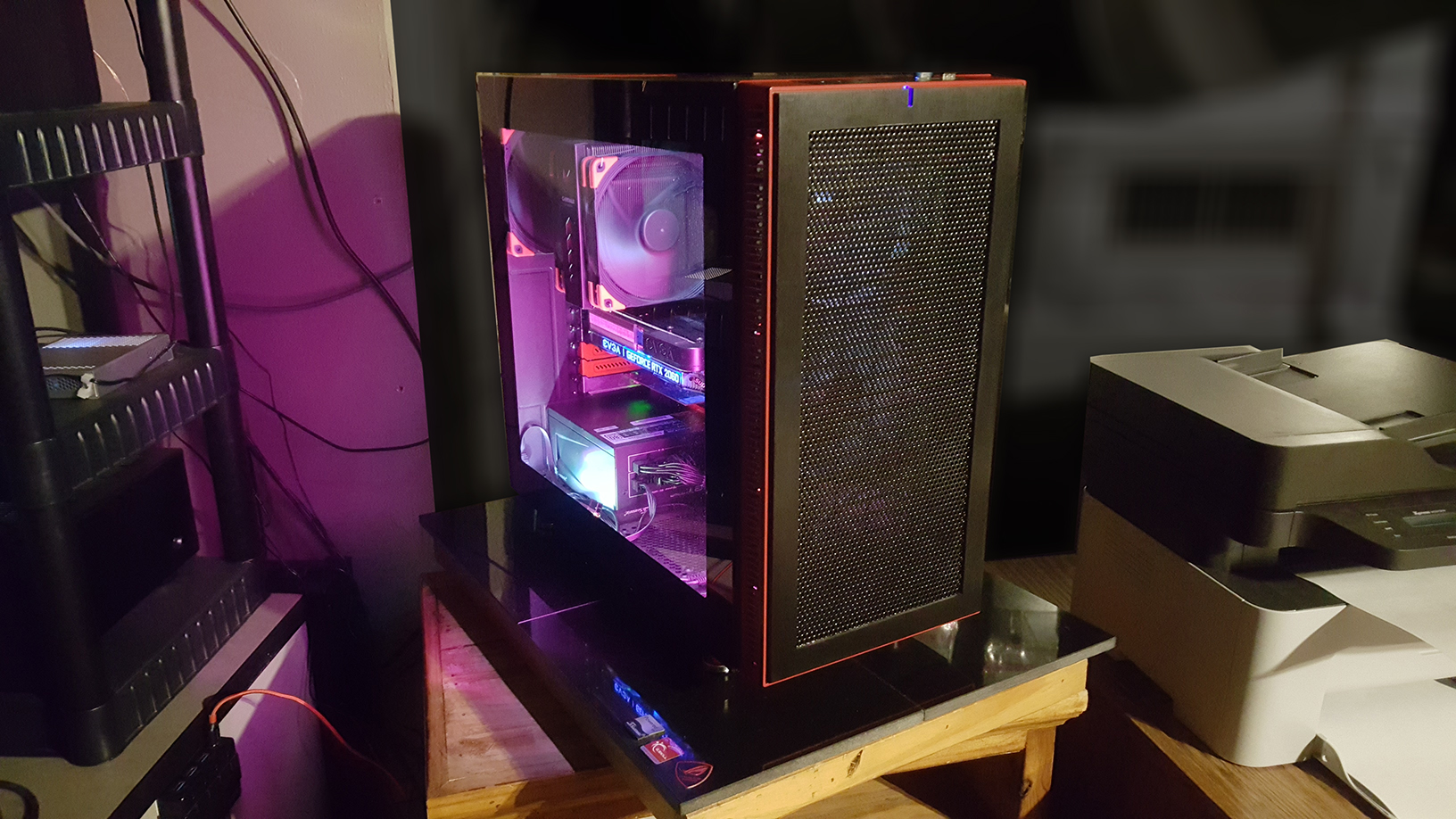 ^ That looks nice and even better without the "S" in my opinion.


Personally never have messed around with ITX until now. Good things do come in small packages.

Its nothing impressive spec-wise, but it gets the job done:

This GPU has a 2.75 slot cooler and 3 slot backplate. It fit in the case, but the case only has room for a dual-slot bracket, so i had to modify the bracket on the 1660 to make it work.

This motherboard is THE DEFINITION of mediocre. The m.2 slot is on the back of the board, which is annoying to access.

NightHawkRMX said:
The m.2 slot is on the back of the board, which is annoying to access.
Click to expand...

Well that's a first. I don't recall seeing any boards with it on the back. I'll bet it has serious throttling issues since it won't get any airflow back there.

I was so confused when I couldn't find the ssd

That actually would probably work. It would work even better if you were to remove the coating where the thermal pad contacts the chassis. I wouldn't worry about it though unless you can actually verify that there is a throttling condition happening.

My Gigabyte X570 I Aorus Mini ITX board came with a thermal pad for mounting an M.2 to the rear port specifically for that reason.
K

Finally completed my first build, all white Asus Rog Build. Had some issues with thermal paste on the CPU as mentioned in a previous thread.

Awaiting Asus Rog 3080 Graphics Card to finish it off. Then ill change the monitor but for now this will have to do as temporary. 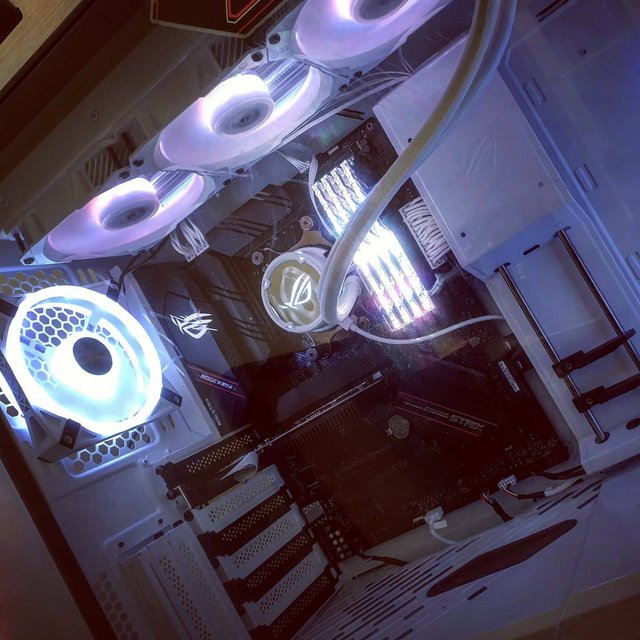 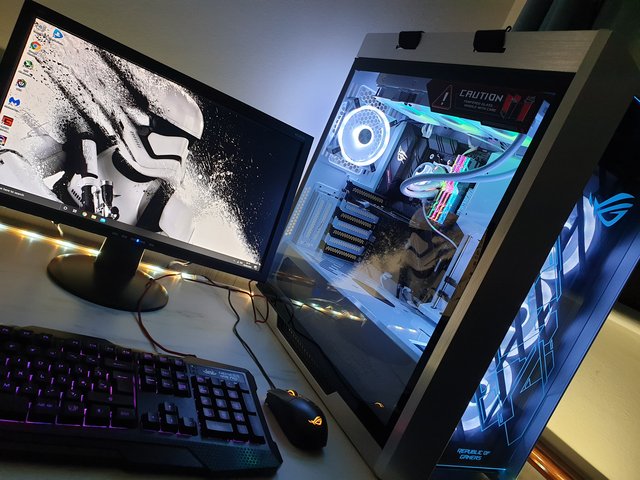 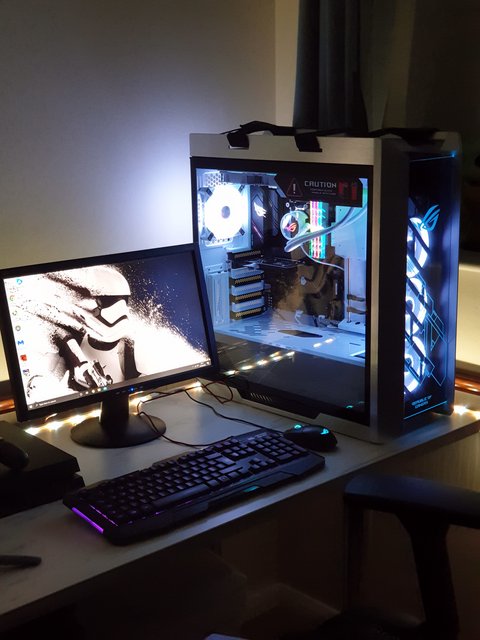 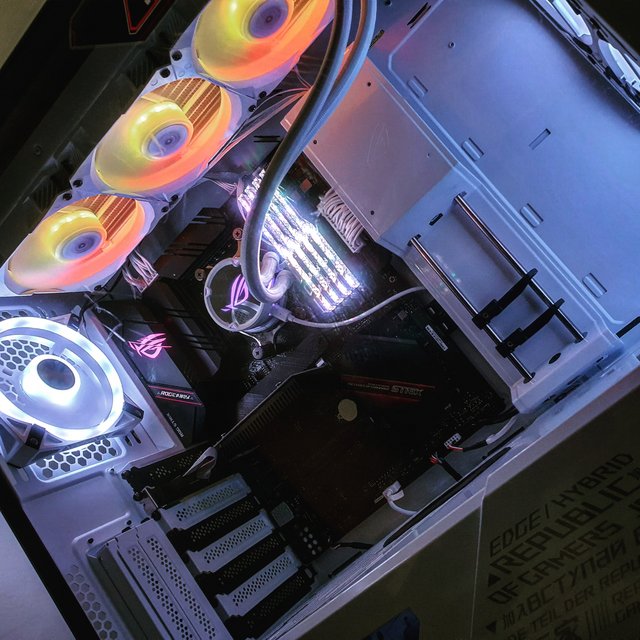 That case is massive. woah
K

Haha yeah compared to my old case it is, but will fit a 3080 no problems and then one day when I feel confident ill attempt a custom water-cooled build tried to future proof the build ,

The pc had 1 really bad photo where the GPU wasn't even in the PC, but when I met the guy everything checked out so I bought it on Sunday. Ended up negotiating to $200.

It was extremely dusty, and gave me some allergy issues after cleaning it, but overall it was in great shape. The plastic hadn't even been peeled off of the window yet. I took care of that peel.

I was pleasantly surprised as it didn't use the cheapest possible parts like I'm used to.

The motherboard isn't the cheapest H110 possible that would work, like they usually do. This one is considerably better and actually has 4 ram slots, M.2 slot, and an 8 pin power plug.
The ram is a very nice Crucial kit, and even in dual channel. I expected some single channel 2133mhz garbage, perhaps green oem stuff.
The GPU is a nicer model with RGB leds on the side and a decent cooler. It is the cheaper 4gb version, but I expected this and its not really any issue.
The PSU is not good, but better than I expected. It's not some random no name oem unit or something similar, at least. Its lasted 4 years so far.

I needed the case for a quick flip of another PC, so I sold that case with some other parts in it and bought a new case.

I added a 120gb NVME I had lying around, which made the boot time 19 seconds as opposed to 1 minute 19 seconds before with the HDD then threw it into the new case. Heres a photo.
https://ibb.co/q0dZkLw
I do not actually have a good photo of this pc before the case swap, but here is the case it came in, just with different HW inside.
https://ibb.co/9Gwnbvv
Last edited: Nov 4, 2020
K

Almost 10 years ago was the last time I posted a rig update. Here is my current rig, and I am sorry for any dumb posts I made back then, I was a child.

Looks nice could use a cable manage

NightHawkRMX said:
Looks nice could use a cable manage
Click to expand...

Best it's gonna get, not much back room

I've had it for about 2 weeks now - was doing chassis airflow and cpu thermal tests - Alphacool's Eisbaer Aurora 360.
[Unable to post pics at the moment, because Windows doesn't recognize the phone for some reason. Busted phone USB port? Trying a different cable didn't work either.]
Update: I have pics now.


Replaced the stock fans with 3x NF-F12 Chromax Black, because screw LED fans and round fan frames on rads is dumb.

This unit was a bit trickier to set up compared to the Celsius S36 I have on the gpu. The mounting part was especially troublesome.
The instructions just say to tighten the socket screws by hand, and the screws don't actually stop. Plus, I don't really know my own strength, so I actually caused a couple of cpu errors due to over-tightening.
So I had to take my time, count my turns for each screw, and stop once it 'felt firm'.

The tubing on this unit doesn't feel as flexible to the Celsius S36.

This unit is rated for up to 2800rpm on the pump, but what I failed to notice is that it was for 13.5v DC. My motherboard only does 12v - that I can see anyways.
Maxing the rpm out just gives me ~2400rpm, so I was left wondering if there's significant performance missing here or not. Looking up threads on pump speed tells me there isn't.

As for cooling ability, I don't know whether to be happy or disappointed. I believe my results come down to 'just freakin' Skylake-X'.
I ran both coolers through Prime95, Small FFT, all AVX options off, with a target time of 15mins. Thermal limit set to 90C.
4.3ghz
NH-D15S(dual fan)

Forget 4.5ghz, I'm nowhere close to being able to push the 4.6ghz bin Silicon Lottery found. Their delid job also appears to be working fine; none of the tests I've done are exceeding 10C between the hottest and coolest cores.

I don't see myself upgrading to either Intel 11th gen nor Ryzen 5000, so now I'm debating whether to fork over another 100USD for a Direct Die Frame + Delid Die Mate X or just roll with the 4.4ghz OC.
That stuff will become useless once I do upgrade, so...
Last edited: Nov 12, 2020
Reactions: NightHawkRMX


I think this perhaps is the dumbest system I have made.

This is the ITX PC above but It would not sell so I put it into a "nice" case with some RGB. It was getting some interest but after my RX5700s unexpected death I just stole the GTX1660 from this PC and have been using it.

I found a liquid cooled GTX1080 on eBay for just under 250 with free shipping, so I put that in here. Its an MSI aero 1080 with NZXT bracket and asetek oem 120mm aio with a pretty thick rad.

Its a terrible itx motherboard with low profile Thermaltake cooler plus this massive liquid cooled card. The bracket kind of makes it look like the card is drooping which adds to the stupidness.

Also the Q300L is a BIG mistake. it is just bad in every way.

NightHawkRMX said:
Also the Q300L is a BIG mistake. it is just bad in every way.
Click to expand...

How's the airflow/cooling end?
Although reviewers have slammed that chassis for it's terrible airflow, some users have claimed that they don't have such issues, even with gaming gpus...
I have to wonder if Cooler Master didn't sneak in a V2 at some point.

I honestly havent tested that. I will have to get back to you.

It only comes with one fan out of the box. The front and top have a bunch of holes drilled in them for airflow, then mesh over it. nowhere near as good as normal mesh, but id guess still alright

The cooling setup is as follows.

GPU: MSI Aero GTX1080 8gb with NZXT AIO bracket and Asetek 120mm AIO. Has a very thick radiator with a scythe 120mm fan. It is mounted in the front behind one of the rgb fans for push pull. The pump, vrm fan, and rad fan is plugged into a sata fan hub which runs full speed all the time. This UTTER GARBAGE h110 has exactly 1 system fan header, and I just found it a better idea to use the hub.

The GPU in furmark bounced between 47-48c after an extended time. I think it's pretty dam impressive that the 1080 is under 50c under an intense furmark load while drawing about 200w according to hwinfo.

Then I fired up aida 64 and ran it side by side with furmark. Gpu went up by basically 1 degree and CPU stayed about 61-62c I ran both tests for 40 minutes at the same time.

Airflow is pretty alright given those results. Makes me wanna get myself a water-cooled GPU.

Those are pretty good results.