Hi, in case you aren't aware of this game, but Bethesda has just released a new gameplay video for its upcoming space RPG, STARFIELD. This video is 15-minutes long and showcases numerous features, such as combat, exploration and character creation.

I'm not much into space-related games, but this one looks quite promising. More importantly we have weapons/guns, and the combat is in first-person mode/FPS as well. Read below if you are interested.

Today at the Xbox and Bethesda Showcase, fans finally, finally got what they've been aching for since 2018. The first gameplay trailer for Starfield is here, and you can gawp at the fifteen minutes of new footage. Just as importantly, Bethesda answered some burning questions about space travel, planetary exploration, and more.

For those wondering if planets would work like Skyrim dungeons, with separate instances representing a small playable area on a planet's surface, they won't.

Starfield will feature 100 different star systems and over 1,000 different planets. And according to Todd Howard, all of those planets will be fully explorable. Land anywhere on any planet, get out, and start exploring. We see a bit of that in the new gameplay trailer. The player lands on a planet, observes some alien lifeforms, and mines some resources from a rocky wall. They then find a pirate-controlled facility.

There's gunplay, thrown grenades, and a space-shotgun is used to finish off the bandits. The player finds a new weapon before taking on more pirates outside, using a jetpack to launch across a gap and engage more enemies.

Action then shifts to a capital city, New Atlantis, to meet a few NPCs, and a brief chat about mysterious artefacts and "visions." Then Todd Howard gives us a look at Starfield's character creation tools and starter traits, which include advantages and disadvantages, and a skill system you unlock as you level up. And a long-lingering question has finally been answered. You'll be able to build your own spaceship and crew it with NPCs.

And yes, you can really fly it. Outer space ship-to-ship combat? Confirmed. Some fans speculated the spaceship would just serve as a base, with space travel being a loading screen after selecting a destination, but the trailer shows it's actually how you get around in Starfield, from system to system and planet to planet.

I was expecting Skyrim in space, but honestly, it looks a bit more like Fallout in space with the weapon crafting, outpost and ship construction, and the skill and perk systems we saw in the trailer. One thing is for sure: with 1,000 different planets, it looks much bigger than any Bethesda RPG to date.

It's been a long wait for loyal Bethesda astronauts. Starfield was first announced at Bethesda's E3 press conference back in 2018. It took three more years before the official cinematic teaser trailer was shown in June of 2021. Originally planned for release on 11/11/22, Bethesda announced in May that Starfield would be delayed until 2023. We still don't have a concrete release date, however. 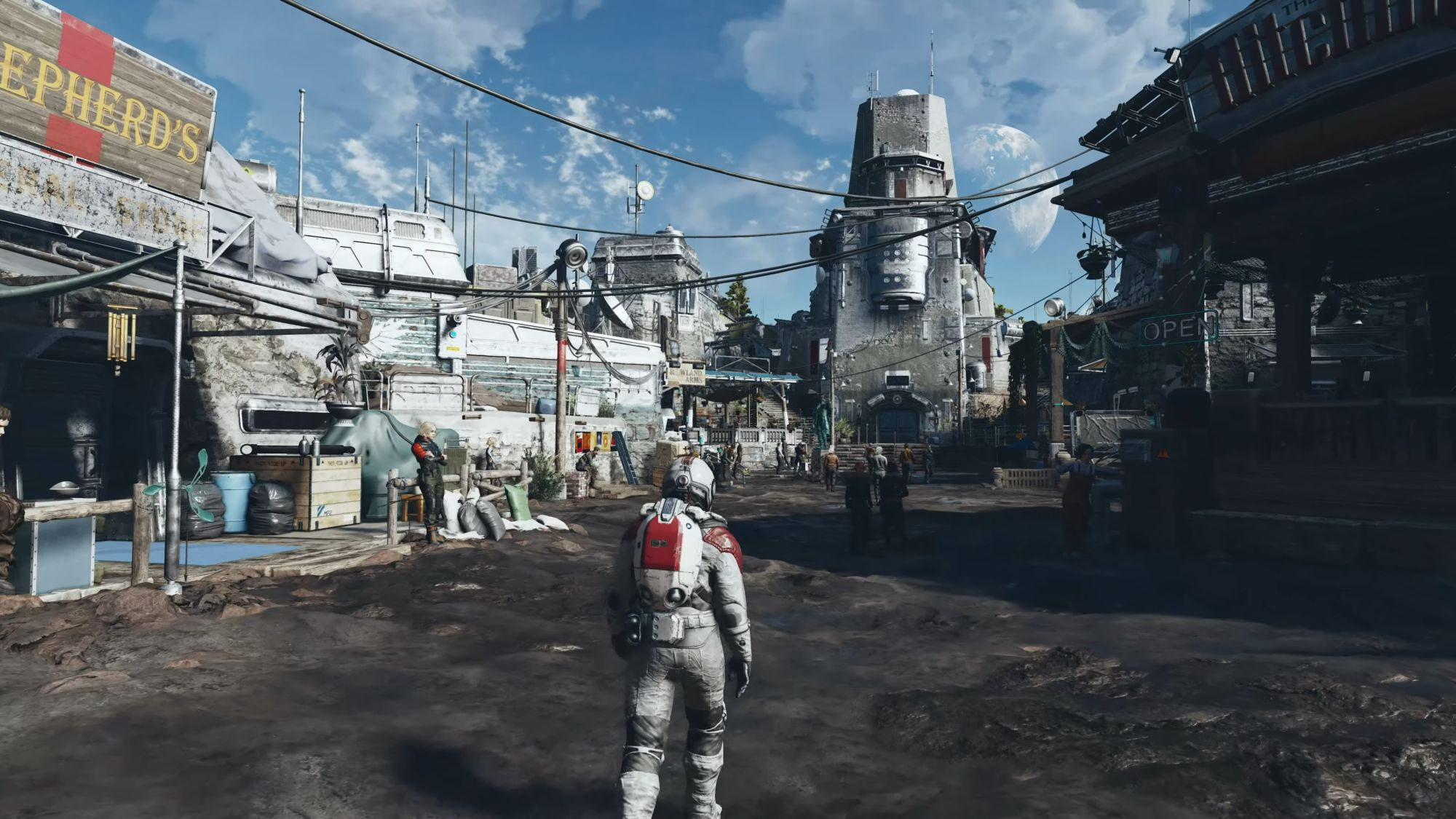 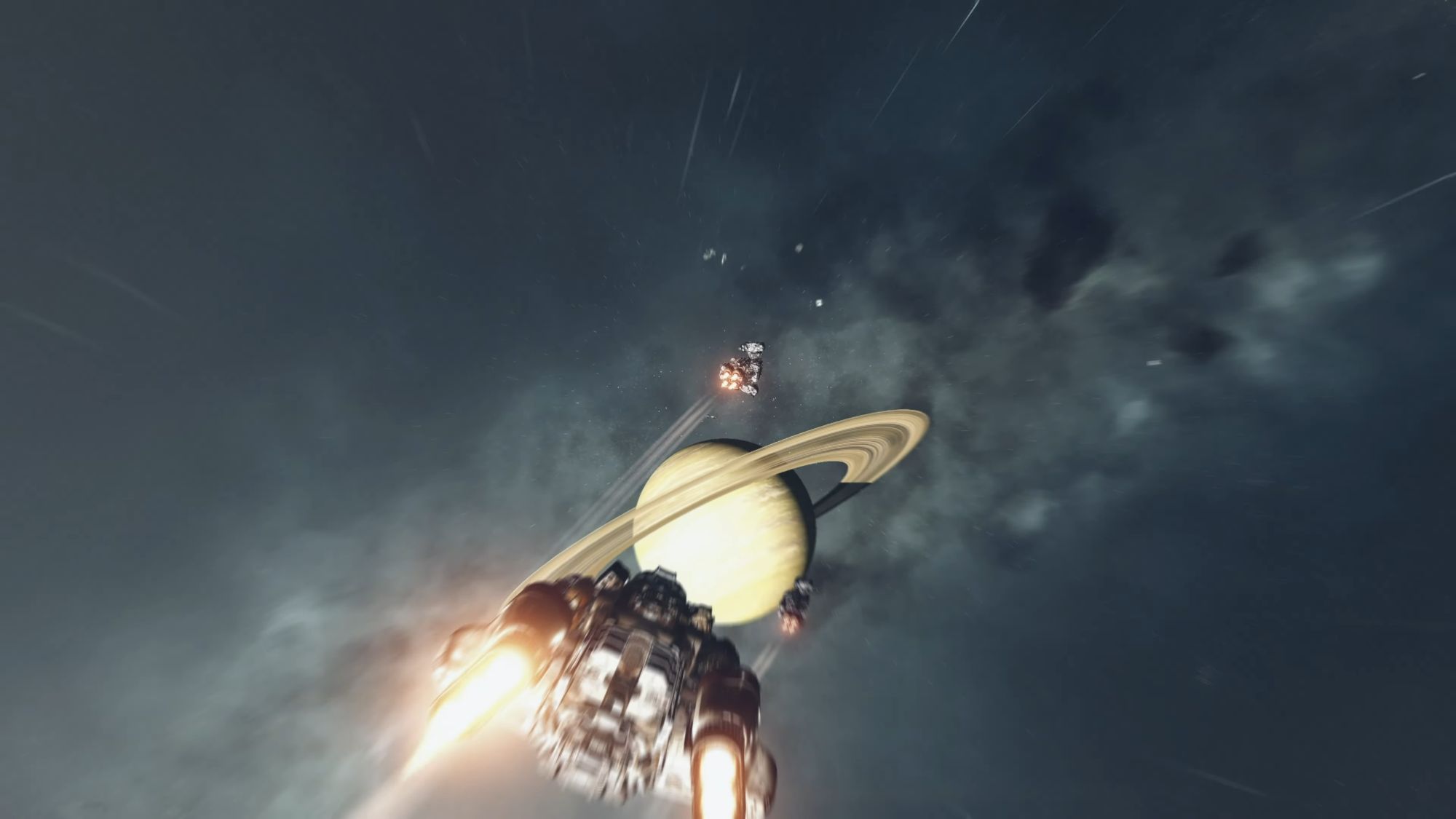 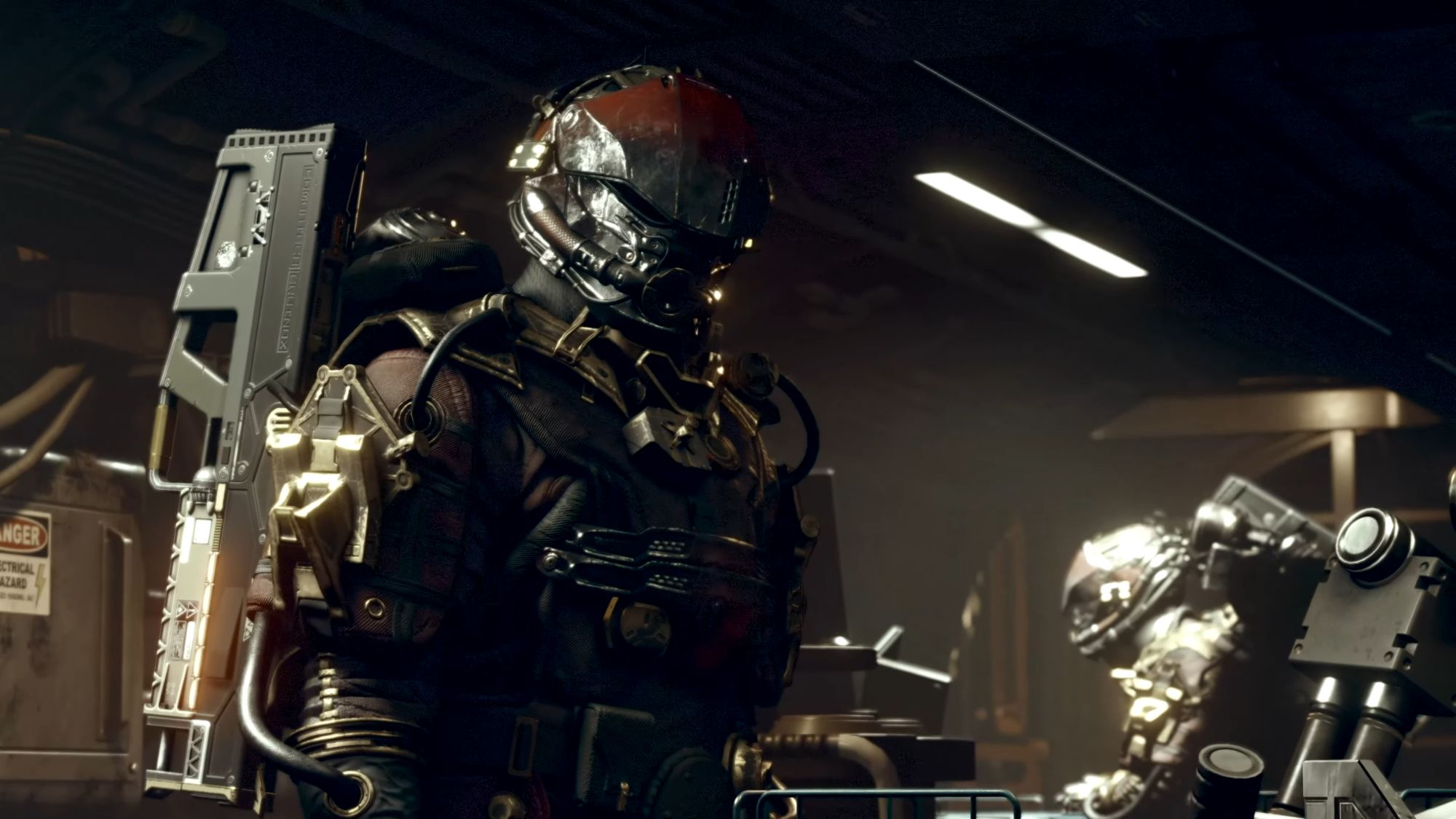 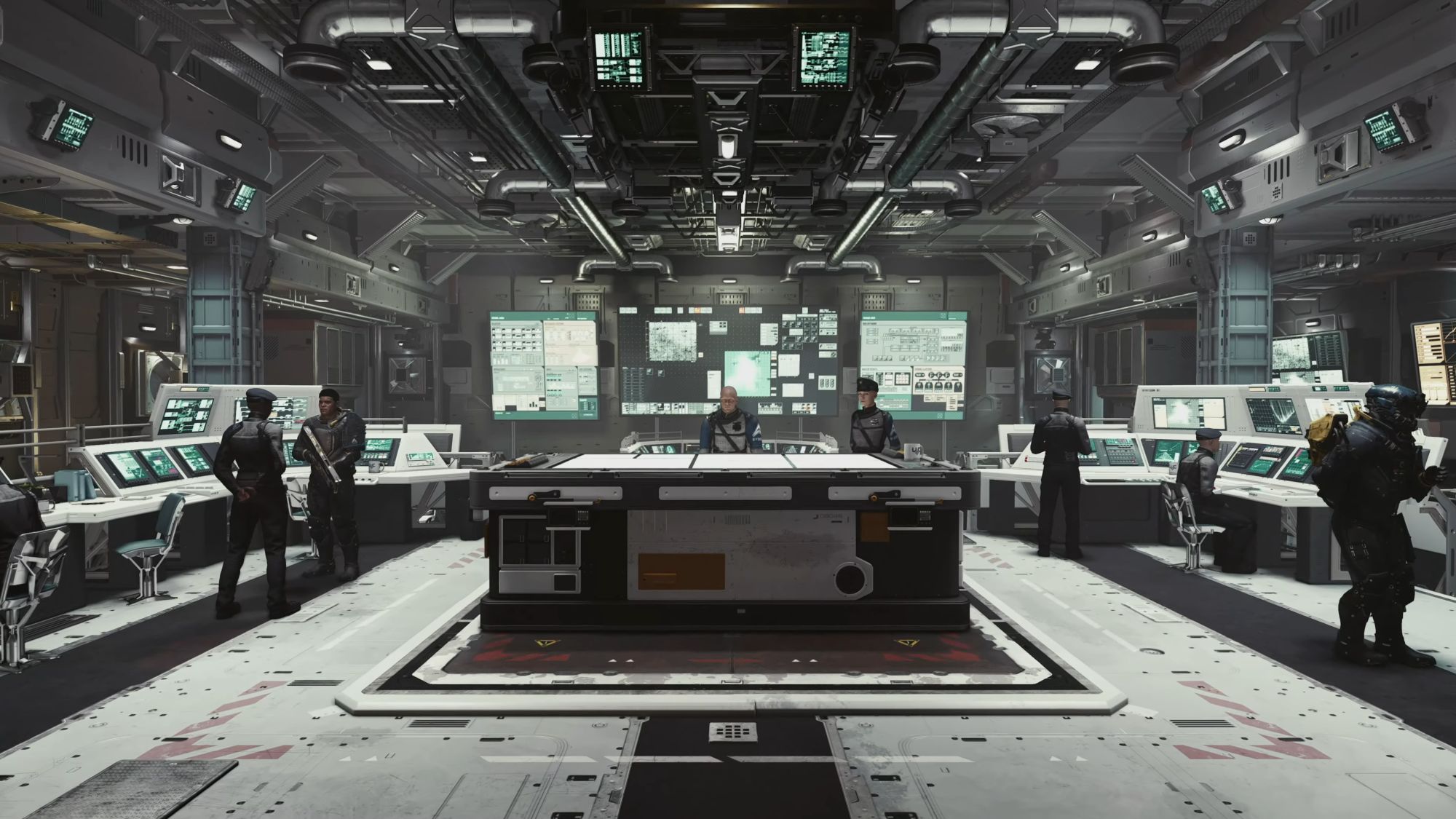 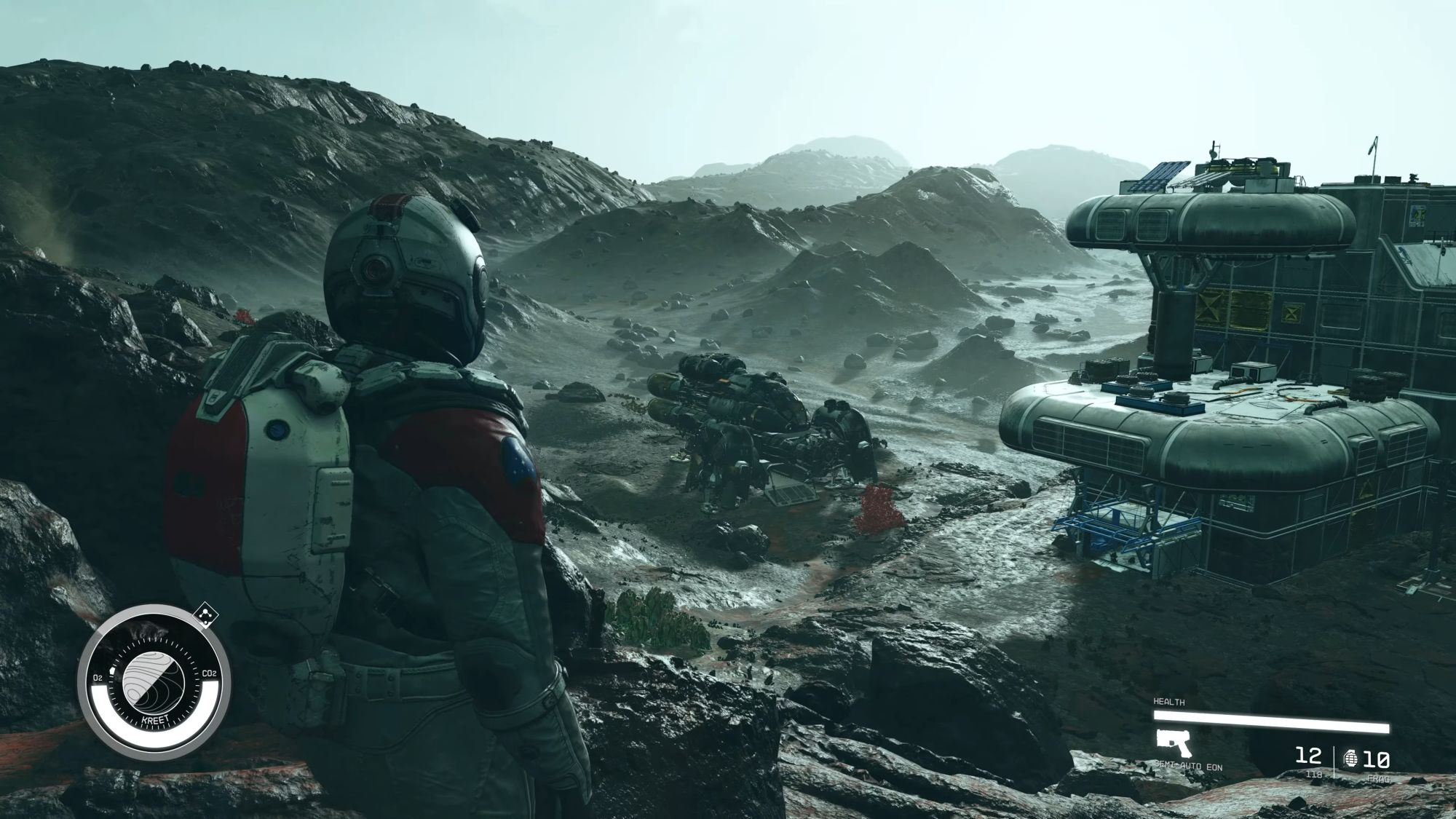 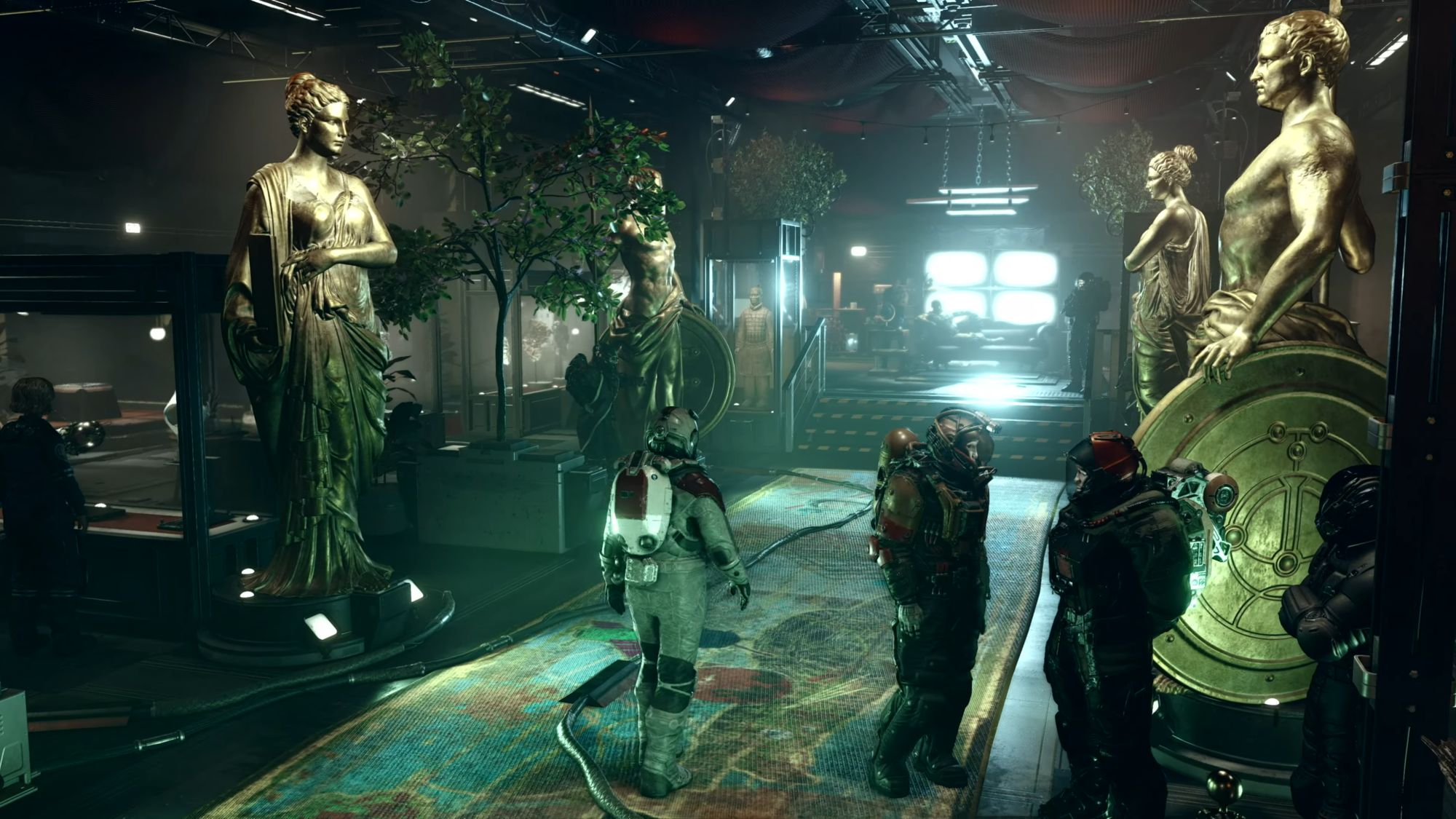 A NEW WORLD.
25 years in the making, Starfield introduces an entirely new frontier to explore—space. In 2330, you join Constellation, the last group of space explorers seeking rare artifacts throughout the galaxy. Venture through the stars and get to know a memorable cast of characters on a quest to answer humanity’s greatest question—what is out there?

BUILD YOUR HERO.
True to Bethesda Game Studios’ immersive RPG DNA, customization is key in Starfield. A look at the character creation menu shows off the depth of choice you have when customizing your hero. Who you will be and who you will become is up to you.

GET CRAFTY.
Stake your claim among the stars by building outposts on discovered planets to conduct research and gather resources. Resources that can be used to upgrade your gear, modify your weapons and ensure you’re ready to take on any danger you might encounter.

SPACE FLIGHT AND COMBAT.
Outfit your unique spaceship with upgradeable parts and customize its interior and exterior. Then, pilot your ship and engage in space combat in real-time.

EXPLORE WITH UNPARALLELED FREEDOM.
The showcase also gave us a glimpse into some of the planetary environments in Starfield. On the rocky moon of Kreet, you will encounter strange local wildlife and the hostile pirates of the Crimson Fleet. But this is only one of many locations to explore. As Howard says, “It’s not just this planet, it’s all the planets in the system… and not just this system, but over a hundred systems, over 1,000 planets, all open for you to visit.”

Bethesda Game Studios “can’t wait for all of you to experience the game,” Howard says. “It’s been an incredible journey for us making it, but we know that’s only the beginning, for it’s when all of you play it that the journey begins.” Where will Starfield take you?

Starfield arrives exclusively on Xbox Series X|S and PC in 2023. Play it day one with Xbox Game Pass. The year is 2330. Humanity has ventured beyond our solar system, settling new planets, and living as a spacefaring people. From humble beginnings as a space miner, you will join Constellation — the last group of space explorers seeking rare artifacts throughout the galaxy — and navigate the vast expanse of the Settled Systems in Bethesda Game Studios’ biggest and most ambitious game.

In this next generation role-playing game set amongst the stars, you will create any character you want and explore with unparalleled freedom as you embark on an epic journey to answer humanity’s greatest question: What is out there?
0

Looks pretty good, not much to nit pick about there. Games like this that have so much player choice always leave me worried I'm going to make some bad choices, so I wish they would have touched on whether those choices can be changed at some point.
0

Yeah, the game really looks promising. Thankfully we also have some first-person view/combat as well, and those weapons sound quite powerful. Because if this was some kind of space exploration game, with elements of RTS and the like, or a space sim, then it would have been a letdown for Bethesda as well.

This looks like a major AAA title, though it's TOO early to comment on the quality of the game, and of course it's optimizations as well. We still have another year to go, and the release date might even slip further, if Bethesda encounters problems with the game's production.
0

Metal Messiah. said:
...though it's TOO early to comment on the quality of the game, and of course it's optimizations as well.
Click to expand...

Yeah the last one they bragged about massive content game world wise was Fallout 76, and that launched in a horrible state. They say this has been in production for some time though, so hopefully that will show. A game with hugely more content also has potential for more bugs though, so I guess we'll have to wait and see.
You must log in or register to reply here.
Share:
Facebook Twitter Reddit Tumblr WhatsApp Email Link