Question PC freezes when using any application that uses graphics

Hello! I recently build my very first PC , however whenever i use any application that utilizes anything involving graphics, the PC freezes randomly somewhere between 5 - 90 minutes after starting the program. This happens when gaming (Overwatch, PokemonTCG), but also when doing less graphically intensive things, like watching youtube videos. When I use applications that do not utilize graphics, like Microsoft Word or Google Chrome (without any youtube video playing) the pc works totally fine and never freezes.

When the pc freezes, the entire screen locks up on the last displayed frame. The PC does not respond to any mouse movement or keyboard input (tried ctrl+alt+del, alt+f4, crtl+windows+alt+b, etc.) There is no BSOD, no error message. When there was previously any sound played it now becomes a loud buzz, like the last previous tone is being played on repeat. No error leds on the mobo glow up, not even the VGA led, the fans on the gpu&cpu keep spinning indefinitely on the speed they were at when the pc froze.
The PC does not reset or recover from the freeze, i tried leaving it alone for some hours but it always requires a hard reset by holding down the power button for 6 seconds. When it reboots again all is fine and i can use windows and any program fine.

Methods i tried but the freezes still occur:

Previously i thought the problem to be related to any drivers/bios for my MSI Z370 MORTAR mobo. My Z370 Mortar is an OEM board, and i suspect it has been pulled from a MSI Infinite X 9th series Desktop and sold seperately, ultimately ending up in my hands. I installed all correct drivers for this OEM board and updated the BIOS, but the freezes when using any graphical application still occur.
My next guess is either there is a hardware defect somewhere on the mobo relating to graphics,
or there is an incompatibility with this OEM board and the rest of the components I bought.
Then again it could also be the CPU, but because it ran Prime95 just fine for >2 hours,
I think the CPU is fine, especially since the freezes only occur when using any applications that uses integrated/discrete graphics.
The PSU could also be a option, but the freezes also happen under very light load, and only when using any graphic resources.
The voltages are all normal and no large fluctuations occur.

Any advice on what to try next / what component is at fault is very much appreciated.
It is my first PC build so i am still very much a novice and have only little knowledge, but I am very grateful for any help!

Thank you for your time!
0

I have to say, despite you call yourself a novice - if you haven't confess on that, I'd never believed this is your first build - this thoughtful testing is something I expect from mature pc builders

Now to the case. My gut feeling is that there are something wrong with the motherboard. You've already ruled out GPU related problems.

I'd like to know a little more about your building process:
So I suggest you take this steps further:

The RAM you have listed above does not fit in the motherboard listed, it's 204pin laptop RAM.
0

I'm having a similar issue with my i9 7900x and 1080ti. When I play COD Warzone my whole PC freezes up and I get the loud buzz indefinitely. Also capping at 60 for me helps it not crash but still crashes sometimes. I've also tried many of the above steps in trying to isolate the problem and figure out possible solutions, so far all to no avail. It was mentioned to me that maybe my cpu is overheating and my AIO is insufficient to keep it cool but while playing my cpu averages between 70-80 degrees with the fps uncapped and between 50-60 when capped at 60 fps. My gpu never gets above 60 degrees even at 97% load with uncapped fps. This is very frustrating.
0

rocktalkrock said:
The RAM you have listed above does not fit in the motherboard listed, it's 204pin laptop RAM.
Click to expand...

You are absolutely correct, when listing my new components I mixed up my old laptop RAM with my new PC RAM, my apologies!
The RAM is used in this pc build: Samsung M378A1K43CB2-CRC (2x8Gb)
0

Grobe said:
I have to say, despite you call yourself a novice - if you haven't confess on that, I'd never believed this is your first build - this thoughtful testing is something I expect from mature pc builders

Now to the case. My gut feeling is that there are something wrong with the motherboard. You've already ruled out GPU related problems.

I'd like to know a little more about your building process:
So I suggest you take this steps further:

Thank you very much for your kind words and thoughts on the matter! I was thinking it may very well have to do with the motherboard, yes! Especially since I got it secondhand for a relatively low price hahaha.

About the building process:
Today I will try to make the Linux Mint boot USB, and run Memtest86, Disks, and some youtube videos! Thank you for your advice, I will report the results in about 10-12 hours!
0

Kiwisko said:
You are absolutely correct, when listing my new components I mixed up my old laptop RAM with my new PC RAM, my apologies!
The RAM is used in this pc build: Samsung M378A1K43CB2-CRC (2x8Gb)
Click to expand...

Have you considered the possibility your 400 watt power supply is the problem? It delivers 30A and 360w on the +12V rail which is on the low side for your build. Sapphire recommends a 500W PSU for the RX 480 NITRO. 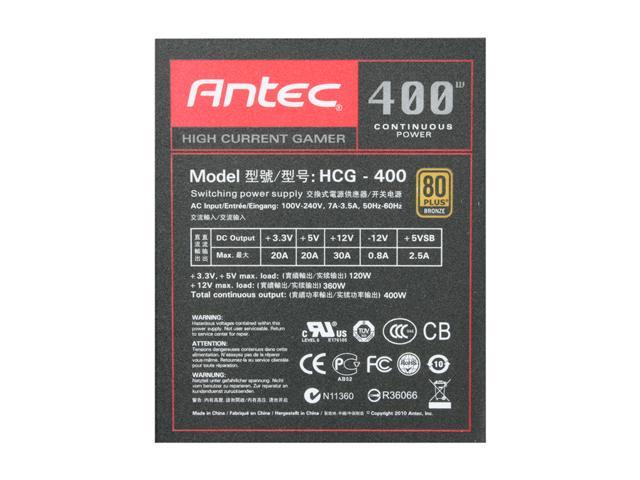 rocktalkrock said:
Have you considered the possibility your 400 watt power supply is the problem? It delivers 30A and 360w on the +12V rail which is on the low side for your build. Sapphire recommends a 500W PSU for the RX 480 NITRO.

I did wonder if the PSU would be enough when using the RX480. I used a PSU calculator like from https://outervision.com/power-supply-calculator , which recommended me a PSU wattage of 395 watts (but I have the Sapphire OC version so the calculator is underestimating). I will try to borrow my brother's 650 Watts CoolerMaster PSU tomorrow. The freezes also occur when i have no discrete GPU installed in the pc, using only Intel integrated HD630 graphics. Without a GPU, the calculated load wattage according to the PSU calculator is 190 watts, so I figured that this 400Watts PSU should be able to power that very well. I will also test out the pc with my brothers 650 watts Coolermaster PSU tomorrow and report back with the results. Thank you for your advice!
0

I have ran Memtest86 to full completion (13 tests, 4 passes) and while it did take some hours, no errors were found, so the RAM is all ok!

I also put on some youtube videos in Firefox while using Linux Mint Cinnamon 19.3, using the bootable USB i made today. The youtube nature documentaries ran fine in 1080p for 80+ minutes, and no freezes occured yet. I do not know if that was pure luck, and testing more graphically demanding applications, like games, in Linux, first require me to do some reading up on how to run them in Linux. (this is my first time using Linux)

I also used the Linux Disks program and did a short self-test. The overall assesment concluded that the disk was OK, and the assesments for the individual attributes were also OK. Because i am not very familiar with all attributes I also made a pic of the results: (no screenshot because I only later found out how to do that in linux, hahaha)

Tomorrow I will take apart the pc completely, inspect, and reseat all components, and test with another PSU. I will report back with the results in about 18 hours or so! Thank you all!
0

The Linux/youtube test doesn't give a conclusive answer, but since the GPU (both) are ruled out, It may point to PSU being too weak, if less resource consumption compared to Windows, but that is in best case very speculative.

Before you start disassembling, you may want to run OCCT stress test, see what happens with 12V reading over time. At least, yoou'd had something to compare against after you've replaced the psu.
0

In the past 2 days I had taken the entire pc apart and rebuild it, now using my brother's 650W Coolermaster PSU. I also did another clean install of windows and did not install any other software/drivers at all this time. It was running fine now for the longest time I've seen it go (20+ hours spread over 2 days) but today the freeze occured again. Since I ruled out the GPU, PSU, Software/drivers, HDD, and RAM, I think it might have to do with the motherboard. I contacted MSI and they said the following about my oem model z370m mortar mobo:

"The BIOS is not fine tuned for all components available in market.
It is not recommended to pair system motherboard with components which is not listed in recommend list."

I have yet to find a recommended list for parts used in the MSI Infinite X 9th Desktops, but I suspect my parts aren't on it haha. I think I will purchase a new B360 motherboard, but it will takes some weeks to arrive where I live. I will also run the OCCT stresstest still, and watch readings on the 12V rail, using both my and my brother's PSU.

I will keep this thread updated when I find out anything new.
Thanks to everyone who helped, you were very kind and learned this new pc builder a lot about troubleshooting!
0

It would be very interesting to see if this would affect a permanent Linux installation too.