I just bought an old(er) openMesh 24 port POE switch, and decided to replace it's fans. The existing fans were some 12 V, 3 pin fans from Sunon.
As a replacement I bought two NF-A4x20 PWN from Noctua. Those are 12 V 4 pin fans

When the switch starts (using the original fans) they spin up to maximum speed, and then settle at a lower speed, which I measured to 7V.

However, when I replaced the stock fans with my Nocuta fans they don't spin, and the switch runs with a "fault" LED blinking. I assume this is because the fans doesn't spin and the signal wire therefore is 0V. However, I'm a little puzzled by the fact that it also doesn't spin up during the initial booting phase where the stock fans normally spin at 100%.

If I keep the stock fans in, and just yank the voltage and ground wires from the nocuta fans down in the same connector as the stock fan it behaves like I would expect. Which is that it spins during the booting phase, and then stops when the voltage drops.

I have currently just installed the noctua fans, and accepts that I have a "fault" led blinking as well as the fans doesn't spin. I hope that they will start spinning if needed, and the switch supplies them with full 12V power instead of the current 7V.

Now, my questions are: 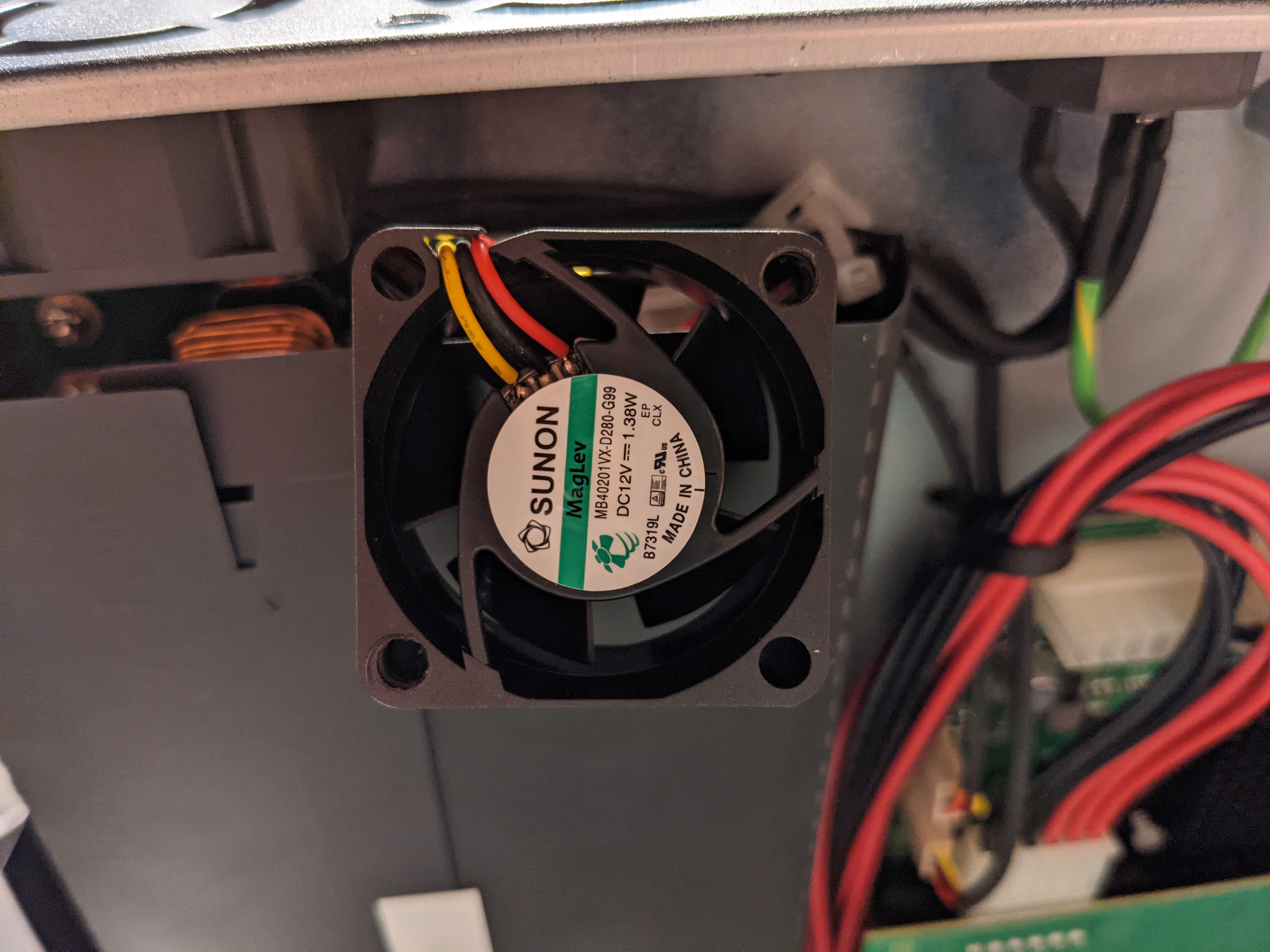 You should've looked into 3pin fans from Noctua or their ilk to replace what you already had on the networking gear.
0
T

You should've looked into 3pin fans from Noctua or their ilk to replace what you already had on the networking gear.
Click to expand...

Thank you. I did look into that, and I didn't find one which was a better fit. But I don't think the 3-pin vs 4-pin is the issue here. The 4-pin version should be (and is physically) able to just plug into the 3 pin connector and run without the control-pin.
0
P

You are right. The design of 4-pin PWM fans includes a backwards compatibility feature. If it is connected to a 3-pin header using the older Voltage Control Mode (that's really the ONLY Mode such a header can do), the 4-pin fans DOES behave like a 3-pin fan and IS speed-controlled. This is not the ideal way to use such a fan, but it is supposed to work.

By the way, an alternative might have been the3-pin style Noctua NF-A4x10 model, but it does have slightly lower ratings for max speed and backpressure (and it's thinner). In practice that might mean only that this fan would run just a little faster to achieve the same air flow and cooling.

Anyway, your real problem is that the connections appear to be wrong. So let's review the standard wiring and colour codes for computer case fans, bearing in mind that your switch may NOT be using these "standards".

For a THREE-pin fan (check details on your old Sunon fan), look at the female connector on the end of the fan's wires. Turn it so that you are looking into the three holes and the two ridges down one side are UP. Then the wires are:
Pin #1 on your LEFT = Ground - Black
Pin #2 in middle = + VDC power - Red
Pin #3 on your RIGHT = Speed Pulse signal back to mobo header - Yellow.
I note that the Sunon fan in your photo uses these three colours, but we cannot see there how those are fastened into pins of the connector.

Next, look at the male header on your switch's mobo. On a computer mobo, there will be a plastic tongue sticking up beside its three pins. To plug in the fan, it only works one way, and the ridges on the female connector slip over the tongue on the header. So, reviewing the fan's connector and wires, does what you have match the pinout above? If yes, then that also establishes exactly what the mobo header pins are.

Now, does your mobo have that tongue sticking up beside its three pins? That would force you to plug the new 4-pin Noctua fan in only one way. IF that were the case, then the new fan should have worked properly. So, something is missing here. Either the old Sunon fan and your mobo are using a non-standard arrangement of wires at the mobo header, or you have somehow managed to mis-connect the new Noctua fan's connector to that header.

Maybe the mobo male header does NOT have the tongue to force how the connector fits onto it. To start with, recognize that the wire COLOURS on a 4-pin fan's female connector are NOT the same as a 3-pin one as described above, even though the electrical functions are almost the same. The most common scheme for 4-pin fans is:
Pin #1 - Ground (as above) - Black
Pin #2 - + VDC power (as above) - Yellow
Pin #3 - Speed Pulse Signal (as above) - Green
Pin #4 - PWM signal (only for 4-pin fan) - Blue
NOTE also that the RIDGES down one side of the female connector are around Pins 1 and 3, with Pin #4 beyond the range of the ridges. That way you are forced to turn the connector the right way to fit over the male mobo header's tongue; the first three pins will have to be connected correctly, whether or not there is a Pin #4.

So, if there was confusion about which way to plug in the new Noctua, see if that helps.

Pursuing your post further, you say you somehow connected wires from the Noctua temporarily to those of the Sunon with the Sunon connected normally. In that situation the mobo was happy with no errors, and both fans started up full speed. So far that is exactly what should have happened. But then you say after that start, the Sunon slowed down as normal, but the Noctua stalled! You also say you have measured the Voltage to the Sunon and it was 7 VDC at the reduced speed. That would be a normal Voltage to feed a standard 3-pin 12 VDC case fan for slow speed. And that Voltage certainly should NOT cause the Noctua to stall. Another anomaly. So first, what contacts did you use to measure the Voltage to the fans? Was it between Pins 1 and 2 - that is, between the Sunon fan's RED and BLACK leads? Related question: when you rigged the temporary connections for this test, exactly which Noctua fan's wires did you connect to which Sunon fan's wires? Assuming that the Noctua wires are colour-coded as I said above, the correct temporary connections should have been:
Pin #1 (Ground) Sunon Black and Noctua Black
Pin #2 (+ VDC power) Sunon Red and Noctua Yellow
Note that last item - different colours on Pin #2
For this test, you should NOT have connected the Noctua fan's wires from Pins 3 or 4 to anything. Such a test does not need any connection for the PWM signal that does not exist, nor any connection of the Noctua's speed signal to any place.

Try reviewing your work and maybe make some connections according to this info, and see if that changes anything. Tell us what you find.
Last edited: Feb 5, 2021
0
T