Hello guys, so about a week ago, right before I went on my holidays I gave my laptop to a computer shop/service to have it cleaned out and re-pasted. The laptop in question is in the title while it's specs are:
RX 580 4GB
Ryzen 5 1600
8GB RAM
Kingston 500Gb SSD + 1TB Samsung HDD
Win 10x64
The computer shop did it's thing, I packed it up and went to the seaside. Now, every time I try to do anything GPU related the laptop shuts down instantly. Every program that boosts the GPU memory clock from the idle of 300MHz to 2000MHz shuts down the computer instantly. No errors in Event Viewer, no BSOD. Just a complete shutdown. I can start it back up instantly but doing so, I risk another shutdown 1-4 minutes in the Windows startup, so I let it sit shut down for about 10 minutes before powering it back on. When I power it back on like that, I can surf the web, watch movies, read PDFs, all without risk of the computer shutting down again anytime soon. It might shutdown about 1-2 hours in.
Forgot. The only time there was an error in Event Viewer, that was not the usual Critical Unsafe shutdown and the Error Windows shut down unexpectedly, was 8 days ago when the Event Viewer returned this value:
1) The computer has rebooted from a bugcheck. The bugcheck was: 0x00000154 (0xffffd90fb8c89000, 0xfffff90b6af40000, 0x0000000000000002, 0x0000000000000000).
and 2 days ago:
2) The computer has rebooted from a bugcheck. The bugcheck was: 0x00000116 (0xffff8b8e679f2060, 0xfffff8063e210750, 0xffffffffc0000001, 0x0000000000000005).
The Dumps were not written because the computer didn't have the time to write them (pagefile is on for the SSD).
To sum up.
If I run Novabench benchmark for GPU. The computer shuts down
If I run any game whatsoever. The computer shuts down on the first rendered frame
The computer could shut down if it's on for a long time or if I've powered it back on immediately after a crash shutdown (I'll hear the fans spin a bit louder, and poof, shutdown)
The computer does not boot back on on it's own after a crash.
I've tried the following:
1) Disconnect the battery from the MOBO and run it plugged into the adapter only.
What I found: - DOTA will reach the Main Menu before shutting off (battery + adapter it shuts down instantly when ran)
- Novabench GPU benchmark will run for about 5 seconds before shutting down again
2) Disconnect the adapter and let it run on battery only
What I found: - Same thing as when ran on adapter only. The computer doesn't crash in less then a second, but in a couple of seconds after running the bench/opening the game

I suspected the poor paste-job so I opened the laptop up and this is what I found (I'm away from civilization so I don't have access to thermal paste or anything like that, except small screwdrivers) 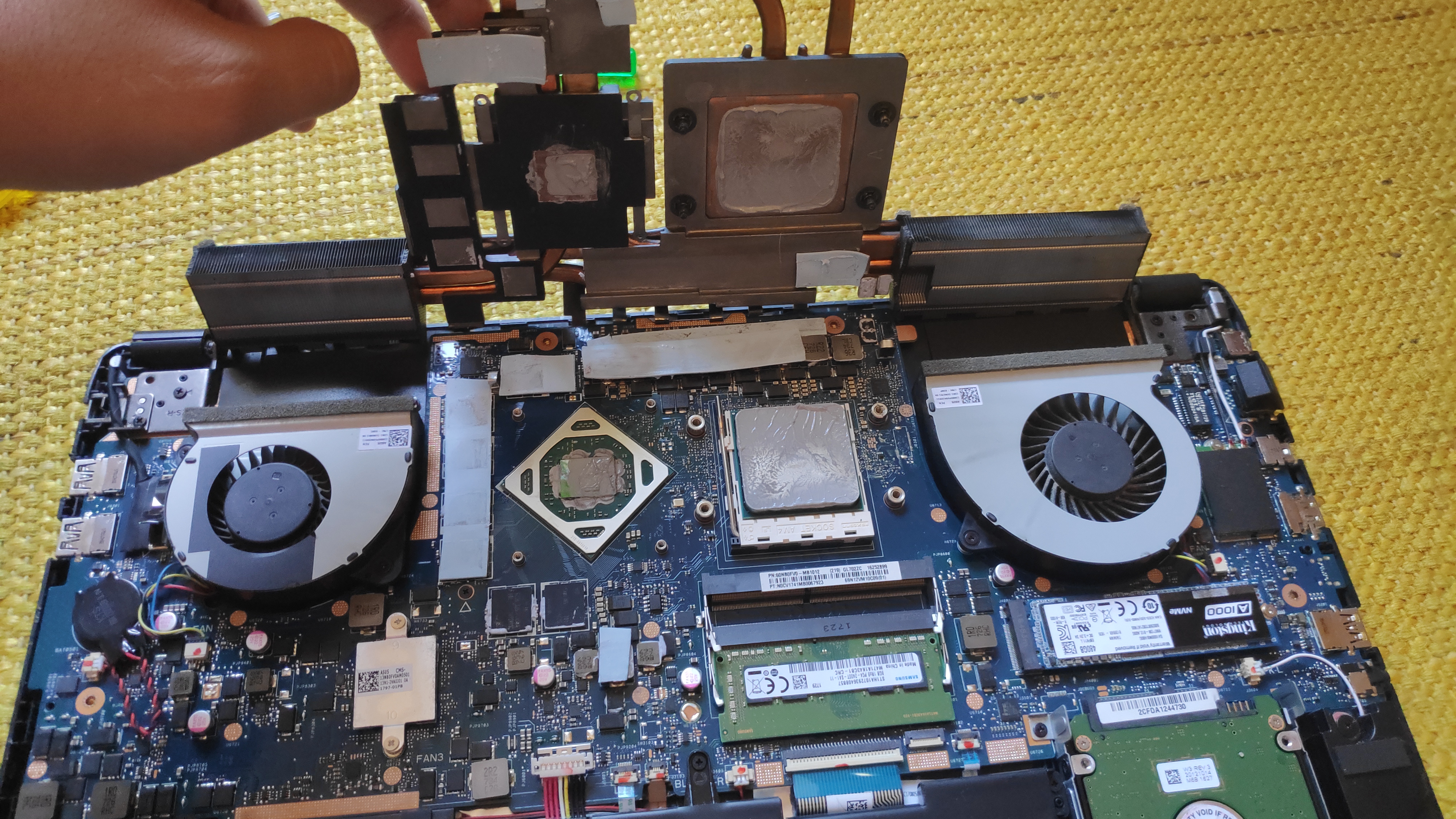 I should note that the left fan (picture the one on the right, next to the CPU) does make a scratching/whizzing sound here and there.
Basically the services cleaned out the dust and removed paste from some controllers and put the thermal pads instead. (seen glued on the heatsink).
I only started getting these problems after the cleanup. Before the cleanup everything was running fine (and hot) GPU under load like Witcher would be around 75-83 degrees while the CPU would be 80-85 degrees. Of course, now I can't test anything under load because as soon as the GPU goes under load the whole thing shuts down. As I'm typing this the GPU is sitting at 66 degrees celsius and the CPU at 55.

Any thoughts? The computer was known to shut down before. I've had 9 unsafe shutdowns from the time I installed the SSD (~New Year's eve) to the time I brought the laptop in for cleaning. These shutdowns were mostly after long gaming sessions in scortching hot weather (The fans would be really really loud and poof, a shutdown from which I would have to wait a minute to boot it back up or it would boot itself back up). Can anyone help with my 3kg big e-book laptop?

Update: Some other service experts are saying that the desktop grade CPU is too strong and that it is its fault. Why are my cpu temps normal while gpu temps so high on idle then? How does that make sense? And why did the problem only occur after the cleanup?
0

Update 2: I have noticed that the only time the laptop crashes is when the memory clock gets boosted from 300 to 2000MHz. I have tried running on battery power novabench gpu bench. If the system is in battery saving mode. The test completes (3d render and compute). If I put the High performance power mode where thr GPU runs 100% even on battery, thr first test will succeed (3d render) but the 2nd test, compute, will start, boost the memory clock to 2000 and shutdown the system.
0

i have the same laptop and i had the exact issue after repasting, the gpu core was unstable and the laptop crashed if the gpu was stressed. turns out that the heatsink needs to sit flush on the core , and the thermal pads on the gpu memory are not allowing that to happen. you have to apply a non-conductive thermal paste blobs on the gpu memory, this makes the gap thinner than the pads and the heatsink sits flush on the core. currently on idle my gpu temps are 33c and on full load its 75c max... undervolting would reduce it further. i hope this helps you ,friend

I have the same problem with my laptop. It only stays on if I keep the fans in Rog Gaming Center on Max. Once I reduce them to anything less then max it shuts down after 5-10 min. No stress on the GPU or CPU. Idle temperatura stays around 30-40 degrees. Air coming out the exhaust is cold.
I's gonna repaste it the following days.
You must log in or register to reply here.
Share:
Facebook Twitter Reddit Tumblr WhatsApp Email Link